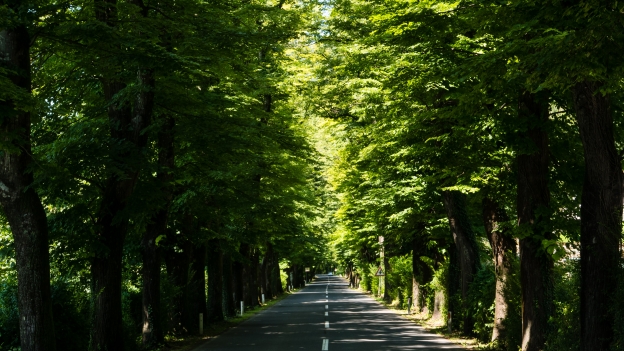 Tree-lined road out of Kobarid heading for Cividale del Friuli

Easy. Pretty much flat or downhill all the way.

Quiet surfaced roads (with unsur­faced options if you want them) 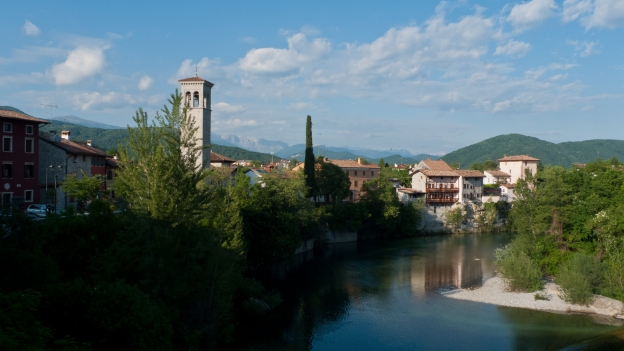 The final section of this route takes a relaxed route into Italy. It returns from Bovec, following the Soča river to Kobarid, and from there it follows the valley of the Nadiža (Natisone) river as it heads for Cividale del Friuli in Italy.

You could continue following the Soča river from Kobarid as it heads for Most Na Soči and then Nova Gorica just over the border from Gorizia in Italy. This is just one of a number of permuta­tions — check the Crossing borders: cycle routes between Italy Slovenija and Austria page for more information. 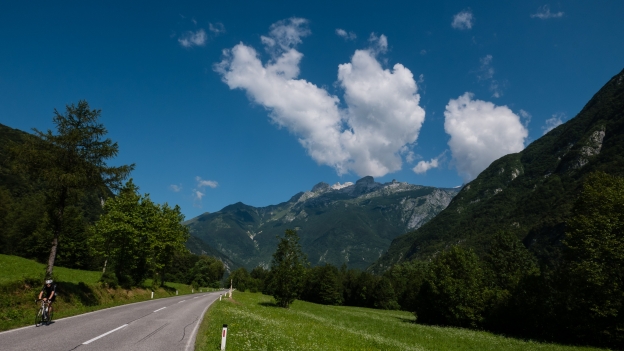 Cyclist on the road to Kobarid

The official route goes out of Kobarid via Sužid before eventually rejoining the main 102 road. The official route looks pretty good, but the main road is a beautiful tree-lined avenue. The 102 takes you to the border 9 kilometres from Kobarid. On the way it meets the Nadiža (Natisone) river.

For some reason, just before you get to the border there are two short stretches of cycle lane (maybe 40 metres long). These were the only cycle lanes I saw in my time in Slovenija. I have no idea why they were there. At the border, there’s also a nice little bar-restaurant (the Postaja Poljana) in the station on what used to be the narrow gauge railway that ran to Kobarid (closed on Mondays). A speci­ality is organic lamb from their own sheep.

Between 1918 and 1947 this area was part of Italy. Tucked away in one of the corners of the museum in Kobarid there are some items from the inter-war period and the Mussolini govern­ment’s efforts to force the Italianisation of the area - these include a sign that says (in Italian) ‘In this shop we only speak Italian’. It was a policy that was to leave a legacy of bitterness. Today this is one of Italy’s official bilingual areas, with road signs in Italian and Slovene and bilingual education in local schools. 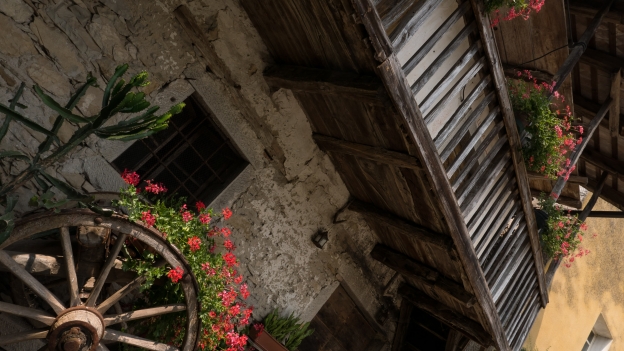 The SS54 continues to Cividale. It’s not an especially busy road, but there are two more inter­esting altern­atives running through the villages in the valley on either side of the river. Both cycle routes have been signed as part of the BiMoBis project {link to resources page}. My favourite, but only by a whisker, is the CS2 on the right (western) bank.

The CS2 starts just before Pulfero (Podbenesec) where the bridge takes you over the river (passing the Locanda della Trota). It then continues through the hamlets of Cicigolis (Šcigla) and Lasiz (Laze) at Lasiz the CS2 signs direct you off the road down a path, but it’s probably easiest to stay with the road.

The road takes you past the turning for the Grotta di San Giovanni d’Antro. I must admit I’m kicking myself about not seeing this place (I’ve cycled this valley twice). It used to be only open at weekends but it is now open weekday after­noons as well (check the website for opening times).

The caves were said to have been used by local people to hide from Attila as he rampaged through the area in the fifth century. The local legend is that Queen Vida took refuge here with her people, and they were besieged by Attila’s troops. After several months of siege, they had reached the last sack of grain in their stores. The besieged threw down handfuls of grain onto the besieging soldiers, fooling them into thinking that they must still have plenty of supplies, so that they lifted the siege and left.

Today there’s a chapel built into the caves. The chapel dates back to the 15the century, but there are symbols in the plaster of the apse that are thought to date back to the 7th or 8th centuries. A 300-metre section of the caves is open to the public. 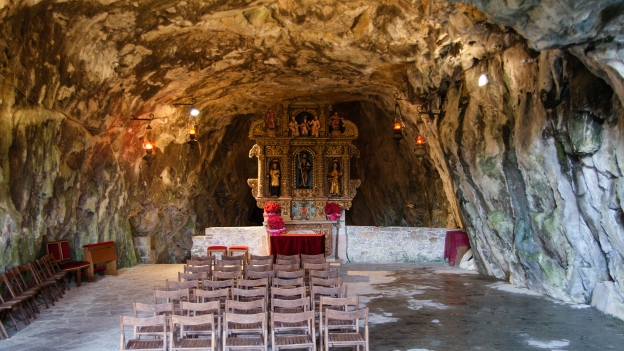 Close to the grotta is the village of Biacis. As you come into the village there’s an intriguing water fountain. The fountain is topped off by the double-headed eagle that was the symbol of the Habsburgs and below that, on the four sides of the fountain, are four heads, one wearing a fez.

Now maybe I’m the only person who’s been vaguely inter­ested, but if you are curious, the story of the fountain is that it was built in 1916 by Italian soldiers from the Cavallaggeri di Alessandria (in Piemonte) who were stationed here. The four heads are satirical repres­ent­a­tions of Emperor Franz-Josef, William II of Germany, Ferdinand I, Tsar of Bulgaria, and the Ottoman Sultan Mehmed V. (Source: graffitidiguerra.it). 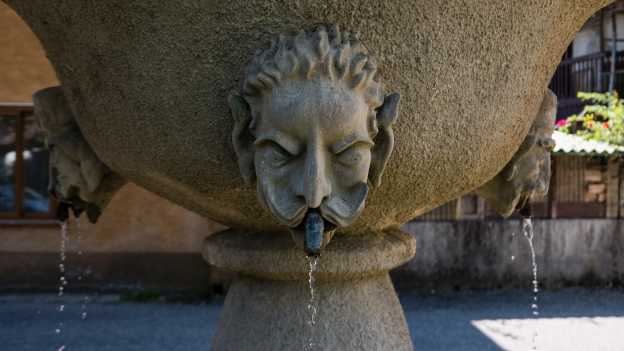 While you’re in Biacis round the corner from the fountain is the borgo rurale with the houses built around a circular courtyard.

Further on down the road there’s another drinking water fountain built by the Cavalleggeri. On the fountain is the inscription:

and the water is indeed purissima.

Before you get to Cividale there’s another point where the CS2 heads off road following the Strada del Molino and Strada della Lesa. The off-road altern­ative is very pleasant, but the road isn’t partic­u­larly busy.

The approach into Cividale takes you over the town’s iconic Ponte del Diavolo (Devil’s Bridge’). There are at least three bridges in Italy. You have to feel sorry for the bridge builders of medieval Italy: pull off an amazing feat of engin­eering and everyone promptly gives the credit to Satan. 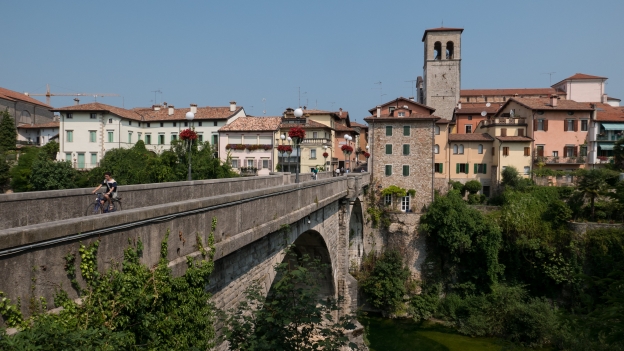 The Monastero Santa Maria in Valle and the Tempietto Longobardo are part of the UNESCO World Heritage &lsquot;serial site&rsquot; Lombards in Italy. To quote the UNESCO citation:

The Longobards in Italy, Places of Power, 568 - 774 A.D. comprises seven groups of important buildings (including fortresses, churches, and monas­teries) throughout the Italian Peninsula. They testify to the high achievement of the Lombards, who migrated from northern Europe and developed their own specific culture in Italy where they ruled over vast territ­ories in the 6th to 8th centuries. The Lombards synthesis of archi­tec­tural styles marked the trans­ition from Antiquity to the European Middle Ages. The Lombard monuments are an exemplary testimony to the cultural and artistic synthesis that occurred in Italy in the 6th to the 8th centuries, between the Roman heritage, Christian spiritu­ality, Byzantine influence and the values derived from the Germanic world. The serial property testifies to the Lombards’ major role in the spiritual and cultural devel­opment of Medieval European Christianity, notably by bolstering the monastic movement. 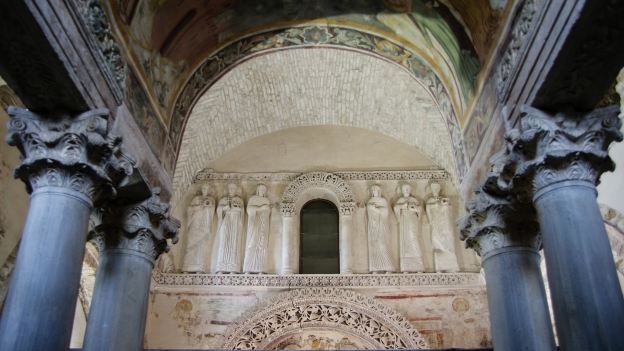 In Pulfero I’ve stayed at the Albergo Al Vescovo (Booking.com: Albergo Al Vescovo) which was very good, but a little on the pricey side the last time I passed by. The Albergo Ristorante alla Trota looks like a reasonably-priced altern­ative. In Cividale del Friuli I would defin­itely recommend the Locanda Al Pomo d’Oro (Booking.com: Locanda Al Pomo d’Oro).

The only hostels on this section of the route are in Bovec and Kobarid:

The only campsites are on the Slovenian side of the border. I stayed at the Camp Siber just outside Tolmin, the Kamp Koren at Kobarid, and the Kamp Polovnik at Bovec. There are another couple of sites that are within easy reach of Kobarid. Although there several sites around Bovec these are by the river and not very handy for the town itself.

Update: there should, hopefully, be a campsite at Pulfero (the Camping Natisone). When I went past (in June 2016) it seemed to be perman­ently closed, but it now looks like it has reopened under new management.

There’s a train station at Cividale with trains to Udine where you connect with the national network. Services are operated by the Ferrovia Udine Cividale for pdf timetables go to: ferrovieudinecividale.it: orari. I was in a rush so I bought two single tickets (one for me and one for the bike), but the guard on the train told me that I could have saved money by getting a bike ticket.