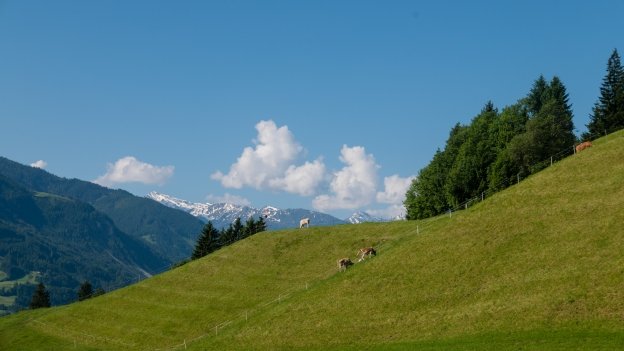 View from the München-Venezia cycle route near Jenbach

Easy, however, there is a fairly big, steep, descent from the Achensee. The descent is a bit tricky, going in the other direction it would be really hard work if you are travelling fully-loaded.

Mainly on asphalt-surfaced cycleways, but parts of the descent from the Achensee are on a forest track that is gravelly in parts.

The route connects with the Innradweg which runs between Switzerland and Passau on the Donau (Danube).

The route follows the course of two Austrian cycle routes: the Achensee Radweg and the Innradweg 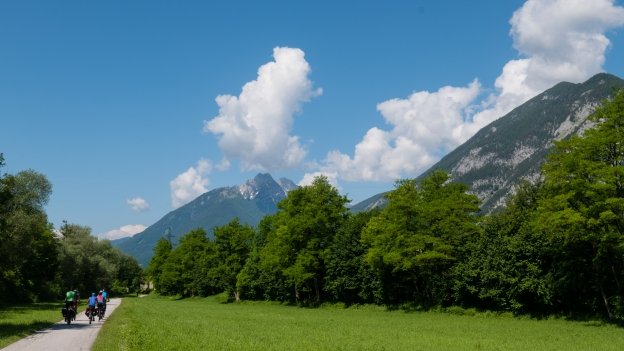 Cyclists on the Innradweg/M-venezia cycle route near Jenbach

Almost entirely traffic-free, this section of the München-Venezia cycle route follows the Innradweg as it heads through the Inntal in the historic heart of the Austrian Tirol on its way to Innsbruck.

This area has a rich history and there’s probably more to see along the way than on any other section of the route. Read more at: Visiting Innsbruck and the Tirol and The Tirol … a little bit of history. 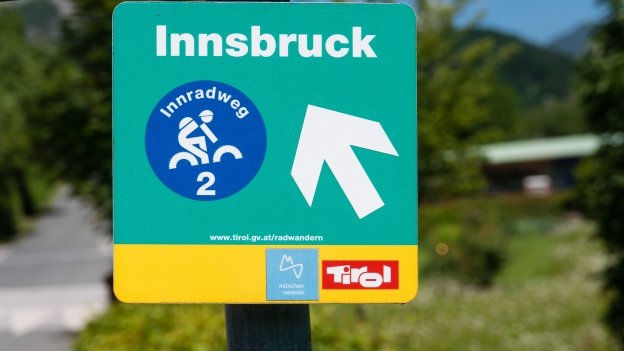 Once you get to the Achensee you are rewarded with a beautiful stretch of lakeside road — the main road runs a short distance above. The route takes you around the lake (with a short section of unsur­faced cycleway) before you come to a junction where you turn left and pick up a cycleway running beside the Achenseebahn railway line. Depending on the time of day you may see one of the steam engines that run on the line between here and Jenbach.

The cycleway takes you past Maurach where there are cafes and a supermarket.

After a fairly short stretch beside the rail line, the cycle route then bears right onto a quiet road that takes you into Eben Am Achensee where there’s a level crossing. The route turns onto a forest track and starts to descend into the Inn valley, heading for Wiesing and Jenbach. It’s a big descent: 400 metres altitude loss in the 4.25 kilometres to Wiesing, and another 40 until you join the Innradweg, although this last bit is easy.

The first couple of kilometres are on an aggregate-surfaced track. This takes you almost down to the junction with the B181. As you approach the junction be sure to look out for the turning on the right, a hundred metres or so before you get to the main road. This takes you to a short tunnel under the road, avoiding a difficult crossing.

A little further on, there is a fork in the road where two cycleways diverge. I took the left-hand fork heading for Wiesing. This lead to a stretch of double­track which was fairly tricky and very gravelly. The other option is to continue on the lane until you get to the next turning, where you turn left. This is a little longer, but less steep.

Whichever option you take, you come to another turning that takes you to another underpass under the main road.

As you come into Wiesing, you need to bear right by the Gasthaus Sonnhof. At the next junction, turn right for a couple of hundred metres on the local road before turning left — look for the sign for the Innradweg. There is then a straight­forward descent that takes you under the autobahn and, a little further on, to the river and the Innradweg itself.

A possible alternative to the official route?

There is a local landesstraße that goes from Maurach to Jenbach which might be an altern­ative to the forest road or the main B181. However, as there are currently no Google Streetview pictures, there’s no way for me to check. At the time of writing (October 2017), Google was due to launch Streetview for Austria in 2018, so it may be available by the time you read this. 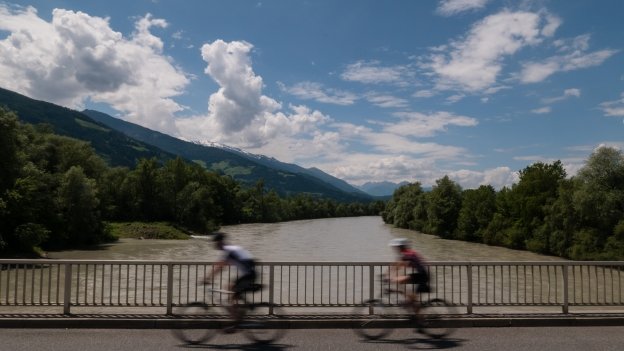 Cyclists crossing the Inn near Weer

The Innradweg is one of Austria’s flagship cycle routes. It follows the Inn as it flows from its source in Switzerland through southern Austria before making a big arc and heading north towards Passau where it flows into the Donau (Danube).

From here, the cycle route follows the left bank of the river as it flows around Jenbach, an on towards Innsbruck, the main city in the Tirol. At times it has to thread its way between the autobahn and the river. In some places, there’s sound­proofing that muffles the sound completely, but in others, the murmur of the traffic is there in the background.

The scenery is glorious, with small villages high on the valley sides that seem so steep that you wonder how anyone could get to them.

Innsbruck is the capital of the Tirol and firmly on the tourist map — but don’t be in too much of a hurry to get there: along the way, both Schwaz and Hall-in-Tirol have old towns that are worth the detour off the route. Schwaz was a major silver mining centre, and nearby Hall was famous for its mint

After Schwaz the route takes to quiet, restricted roads through fields. Going into the village of Vomp I was intrigued to see that Vomp has its own highland games there was even a picture of men in kilts having a tug of war.

After a certain amount of faffing around to get over a river, the route comes to the train station at Pill-Vomperbach where the cycleway resumes but this time running beside the railway line. A little further on, near Weer the route crosses the river and then skirts around Wattens. 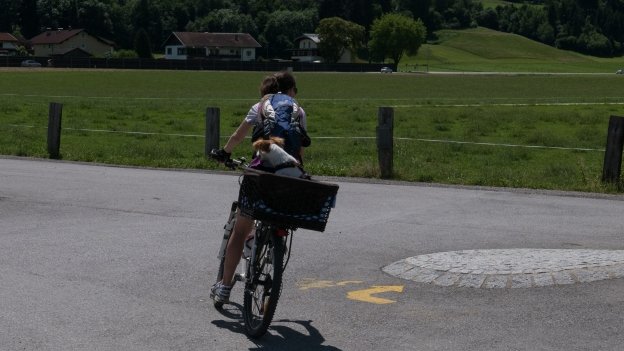 After Wattens the route ducks under the autobahn and from here follows a narrow strip between the river and the motorway.

Look out on your left-hand side for the Karlskirche (de.wikipedia.org: Karlskirche (Volders)) and adjoining monastery.

For much of the way the sound­proofing and landscaping is so effective that you wouldn’t realise you were a few metres away from the autobahn except for the occasional bit of engine noise. Unfortunately it comes to an end, and you’re left riding beside the autobahn, although when I rode this section cyclists were speeding past the traffic which was moving at a crawl.

The stretch beside the autobahn comes to an end at a wooden bridge that takes you over the river (note that there are signs asking cyclists to dismount). You could simply turn left here and continue on, but it would be a shame to miss Hall’s altstadt (old town) —the largest and best-preserved in western Austria.

You can get to the centre of Hall by taking the underpass that goes under the railway line (again there are signs asking cyclists to dismount). From here a quiet back street takes you to the Burg Hasegg and the Münzerturm. You should be able to see the Münzerturm ahead of you - looking like a medieval space ship.

Turn left through the gateway, and you can go past the Münze Hall (Mint museum), and come out beside the tourist inform­ation office. 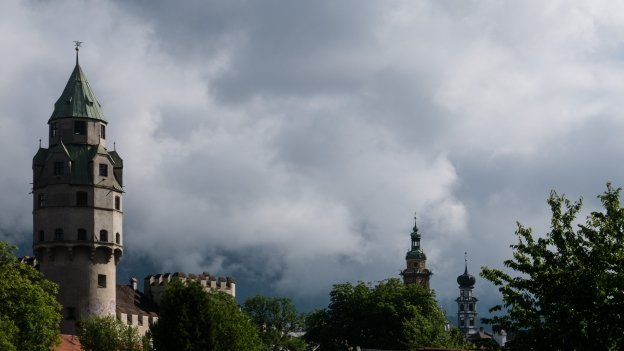 The Münzerturm in Hall in Tirol

There’s only one hostel on this section of the route: the Jugendherberge am Achensee. There are several hostels in Innsbruck — see the next section of the guide.

There are three campsites along this section of the route: Camping Inntal near Wiesing | Schloss Camping Aschach (Volders) | Camping Hall (Hall in Tirol).

The Hall campsite is on the same site as the town’s open-air swimming pool complex. I had assumed that admission to the pool was extra, but according to the website, it is included in the price (but there may be a minimum stay requirement).

There are a couple of campsites on the other side of Innsbruck that might be marginally closer to Innsbruck than the Camping Hall.

While there is a rail line between Jenbach and the Achensee, so far as I know, it is a tourist line with no facil­ities for carrying bikes. The first mainline train station is at Jenbach, from here you can catch trains to Innsbruck, or Brenner, or, in the other direction, to Rosenheim and München.

MPreis is a chain of super­markets in the Tirol. Their Baguette cafes are a great place to stop for a nice frühstück (breakfast) and they also do some really good lunchtime snacks. Most branches also offer free WLAN (wifi). There are branches in towns all along the Austrian section of the route including Maurach, Schwaz, Wattens, Hall in Tirol, Innsbruck, Patsch and Matrei am Brenner. For a complete map of their branch locations go to: Baguette. 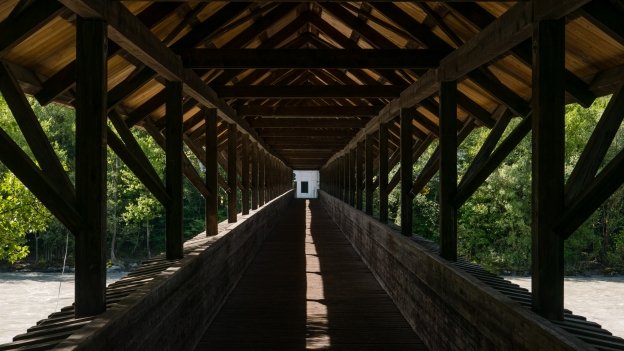 Cyclist-pedes­trian bridge over the Inn at Hall in Tirol