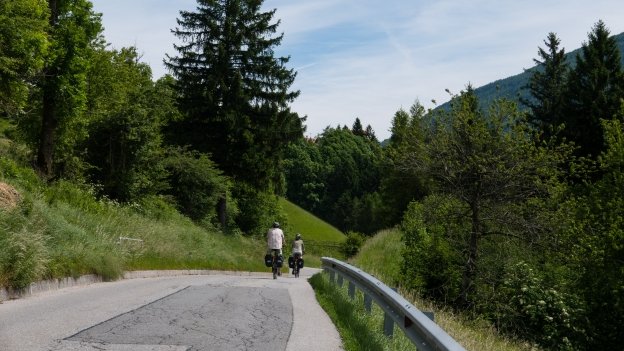 Cyclists on the München-Venezia cycle route near Schönberg im Stubaital

49 or 50 kms depending on the variant

Moderate. This section involves a climb from the Inn valley to the Brenner Pass with an altitude gain of about 800 metres (total climbing about 1100 metres).

This section is mainly on roads. While through traffic takes the autobahn, there is still a fair amount of local and tourist traffic about.

Some parts of the route have cycle route signs, but others don’t, so you may need to rely on the ordinary road signs. 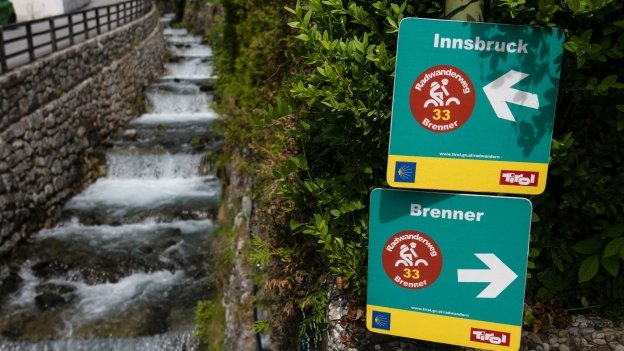 This section of the München-Venezia cycle route climbs from the Inn valley into the Wipptal on its way to the border with Italy. There are two variants: one goes via Innsbruck while the other goes via Ampass. This is the only section of the route that involves a big climb, it’s well worth the effort, but you could take the train if you prefer.

The München-Venezia route has two options after Hall. One goes into the outskirts of Innsbruck before crossing the river and climbing to Ampass. The other goes through the centre of the city before climbing towards Igls. The two options meet at Patsch. Of the two options, the climb via Ampass is less steep.

… or you could take the train

The routes to the Brenner are on roads, with the last 12 kilometres on the main B182 road. This isn’t especially busy, but you may want to avoid this section by taking the train (the tour operators on this route seem to encourage their customers to take this option). There were quite a few cyclists waiting for the Brenner train when I arrived in Innsbruck. If you do want to take the train option, you might want to get on at Hall in Tirol.

I would also suggest a third option: you could continue on the Innradweg as it heads for Imst, where it joins with the Via Claudia Augusta , and then on from there to Martina in Switzerland, and on to Italy via Nauders and the Reschen Pass.This route is longer of course, but combines some of the most beautiful parts of the Austrian and Italian Tirol and is worth serious consid­er­ation if you have the time.

Hall in Tirol to Innsbruck

You head out of Hall following the railway line skirting round in indus­trial estate on a quiet road. While the town of Hall has a very pretty altstadt, it also seems to be a major rail-freight centre. The road skirts the indus­trial part of the town, and a series of logistics centres and marshalling yards, not to mention a big recycling centre: look out for the small mountain of cars as you pass by. The road seemed generally pretty quiet, but there are lorries around.

The certain point just as the road of bending round you need to turn left to cross over a level crossing. There is a no-bikes sign by the level crossing but you need to carry on over it. On the other side there is a tarmac cycleway which continues, again following the railway line, with the river on your left-hand side.

The two variants separate just outside Innsbruck at the New-Orleans-Brücke (bridge). On the other side of the bridge, you need to turn left and follow the Archenweg (there is a big green sign for the Golftrainings-Zentrum).

After the New-Orleans-Brücke the route passes the Baggersee swimming lake. In the distance, overlooking the lake, you can see the Schloss Ampass (Ampass Castle) the route loops climbs around and above it.

Just after the lake (or at least after the car park) you need to turn sharp right onto a road that is closed to traffic and skirts round the lake. After a short stretch, you turn left on the roadside cycleway and go under the motorway and then left again.

The Brenner Base Tunnel

As you climb, you’ll see a long covered conveyor belt running beside the road and down into the valley. This is carrying waste from the Brenner Base Tunnel project (en.wikipedia.org: Brenner Base Tunnel). With over 40 million tons of goods coming through each year, the Brenner is, by some distance, the major trade route across the Alps. The tunnel is scheduled to open in 2025 and will run for 55 kilometres between Innsbruck and Fortezza Franzensfeste in Italy. At the moment only 30 percent of that trade travels by rail, and the hope is that the tunnel will make it possible to shift a lot of the freight traffic that currently trundles over the autobahn from road to rail.

The road makes a long loop along the valley side through the village of Ampass. It gets much quieter after Ampass. Coming out of Ampass you take the Römerstraße, following the signs for Aldrans and Lans. The Römerstraße (Roman road) is the historic route that was used to carry salt from Hall to the Brenner, and on from there into what is now Italy.

The road seemed noticeably busier between Aldrans and Patsch, but fortu­nately, most of the traffic seems to turn off onto the autobahn at Patsch. 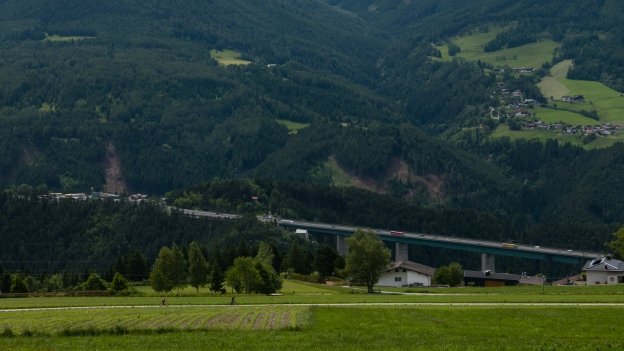 Kids cycling home from school near Patsch. In the background is the autobahn to Brenner

The section from Hall to Patsch isn’t very inter­esting, but the next section is on a lovely, quiet road high on the valley side, with some great views of the snow-capped mountain peaks to the west. From here there are also signs for the Brenner Radwanderweg (route number 33). 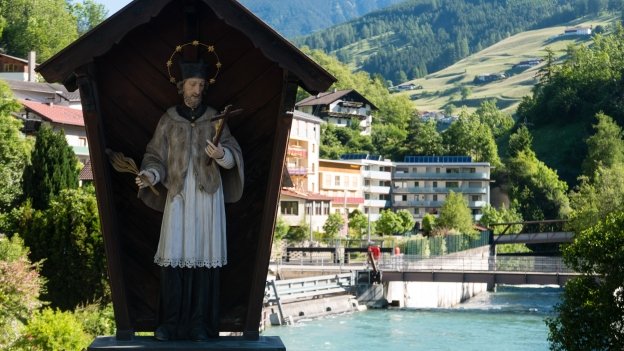 The route makes a sharp descent down into Matrei Am Brenner. You don’t cross over the first bridge but instead, stick to this the same bank of the river and follow a narrow lane which runs between the railway line and the riverbank you then reach another bridge where you cross over, and then turn left following the riverbank. Whether this makes much difference as a matter of opinion.

The route out of Matrei Am Brenner is slightly fiddly (although it is well signed): you have to cross over the river and go under the railway line, and then cross back over the river to pick up a traffic-free route which follows the right bank of the river (looking downstream), before crossing back over the river again at the second bridge (the turning is quite easy to miss).

Take the next left after the bridge and continue with the river on your left and the railway on your right. Further on, it’s once more back over the Sill river and short stretch of compacted-aggregate bike path which takes you into Steinach am Brenner, passing the open-air schwimmbad (swimming pool). 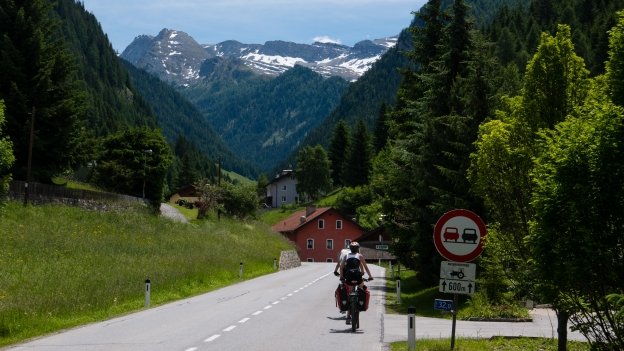 Cyclist on the München-Venezia cycle route near Gries am Brenner

Steinach am Brenner to Brenner

At Steinach there are a couple of options. The official gps track for the route goes under the railway line and then onto the B182, but the signs point you left onto a restricted road, passing the station on your right-hand side. The second option is the more scenic, but a little after Sigreith the road narrows into a track and there’s a short, steep, descent under the railway line at Stafflach. If you are pushed for time you might be better to turn off the Brenner Radwanderweg at Steinach and take the main road from there, or, altern­at­ively, turn off at Sigreith.

Whichever option you choose, you have to eventually join the B182 road as it heads for Brenner. The B182 road this is relat­ively quiet, with the occasional flurry of traffic as cars get stuck behind a slow-moving vehicle. There is very little local traffic: most seemed to be tourist cars and motor­bikes. The main road then takes you to Gries am Brenner and on from there to the border at Brenner.

As you get close to the border, you may notice an increase in the number of trucks around. The ÖBB (Austrian Railways) operate a roll-on roll-off train service for lorries, but it seems to stop at the border and the trucks coming off the trains have to go back onto the B182 road for a brief stretch before continuing their journey on the autobahn. 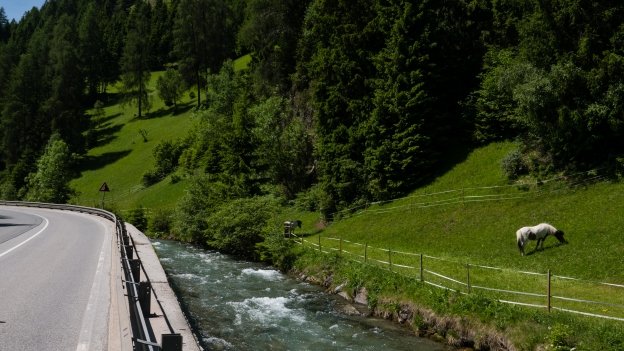 Alpine passes are often an anti-climax, and Brenner (Brennero) is no exception. You could easily cross the border without realising it — the only trace is a stone marking the border line. Facing you on one side is the Brenner Outlet Center, and on the other, what looks like it used to be the Austrian customs post — now a clothes shop.

Resist the temptation to turn around and head home, and hang in there for another couple of hundred metres. Things will soon start to look up. On your right, as you look towards the Outlet Center you should see the sign for the cycleway that takes you out of Brenner and on towards Sterzing.

For the initial kilometre or two of Brenner, the tarmac cycleway runs beside the Italian equivalent of the B182 (SS12). The river on your right-hand side is the Eisack (Isarco in Italian). 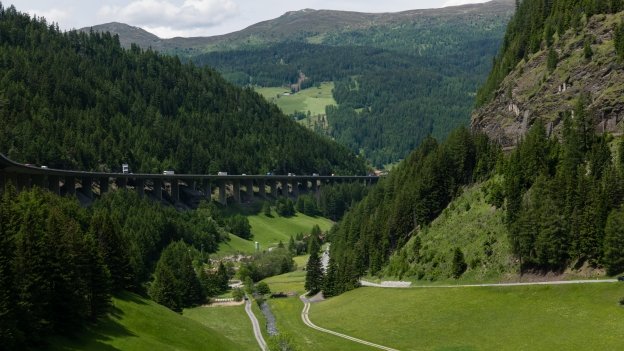 View from the München-Venezia cycle route near Brenner

The Hostel Igls Heiligwasserweg is convenient for the route and might be a good place to stay if you are planning to make it over the Brenner in the same day.

There are no other hostels on the route until you get to Brixen.

There are a couple of campsites to the west of Innsbruck: the Camping Kranebitterhof; and the Camping Stigger at Völs. Both are accessible from the Innradweg and are close to the airport.

After Innsbruck, there are no campsites until you get to Sterzing (Vipiteno) in Italy.

There are local rail services to Brenner operated by ÖBB (Austrian Railways). You can catch trains direct from Hall in Tirol if you prefer.

There are also inter­na­tional Eurocity services non-stop from Innsbruck to Brenner, but note that you need to reserve a space for your bike (10€) so this is a more expensive and complicated option.

There are also buses with bike racks that run as far as the seilbahn (gondola) at Patsch. This might be an option if there are a couple of you (one to load your bikes onto the bike racks and the other to load you bags onto the bus).

There are Baguette cafes in Aldrans, Lans, Patsch, Matrei am Brenner and Steinach am Brenner. The terrace of the branch at Patsch has a fine view. 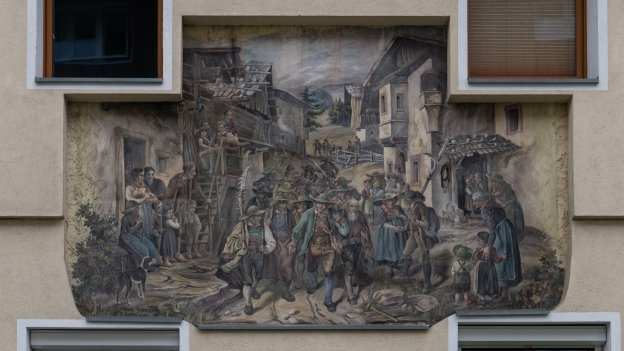