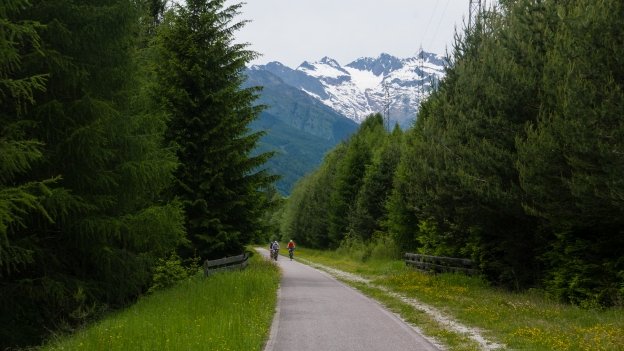 Section of cycleway on the Brennerradroute near Brenner

Entirely on surfaced cycleways or roads.

At Fortezza Franzensfeste you have the option of continuing south towards Brixen (Bressanone) or turning east towards Bruneck (Brunico).

The route connects with the Fahrradroute Pustertal at Fortezza Franzensfeste.

This route is also known as the Brennerradroute (because it goes to and from Brenner) and the Eisacktal Radweg (because it follows the Eisack river). It forms part of the München-Venezia and Ciclopista del Sole. Until relat­ively recently it was part of eurovelo 7, but seems to have now disap­peared from the maps of the eurovelo network. 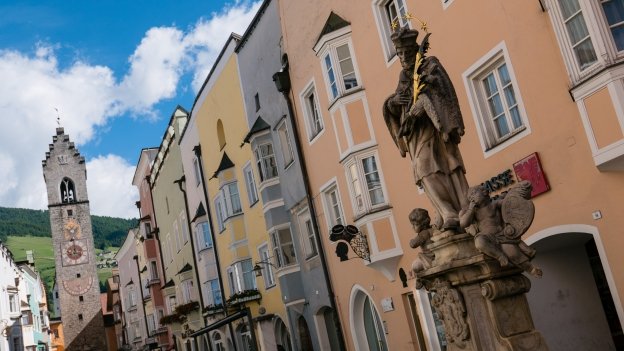 From Brenner the München-Venezia cycle route goes downhill, following the mainly traffic-free Brennerradroute cycleway. Along the way is the historic town of Sterzing (Vipiteno) one of the region’s gems. At the end of this section you have the option of a side-trip to Brixen (Bressanone) — another historic and charming town that’s one of the highlights of the whole route.

At the end of this section you have the option of a side-trip to the town of Brixen (Bressanone), a historic town with a charming centro storico, and nearby is the Kloster Neustift (Abbazia di Novacella). Highly recom­mended: see Visiting Brixen and the route description for the Brixen variant. 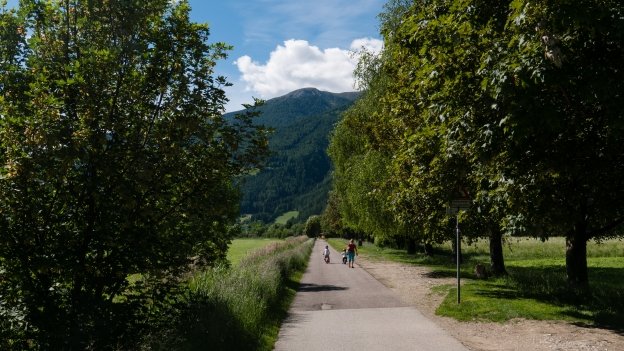 The cycleway follows a section of what was once the rail line to Brenner, made redundant by the rerouting and upgrading of the line.

Just after the six-kilometre marker, you come to a short (illuminated) tunnel. From here, the cycleway starts to separate from the autobahn and the main road. The cycleway follows the opposite side of the valley from the autobahn, and down below, you can see the village of Gossensaß (Colle Isarco). In the distance, you can see the snow on the mountains of what must be the Stelvio. As I descended all I could hear was the sound the cicalas (crickets), and a church bell in the distance.

When I passed this way in 2017 they were building a bridge over the river, so they had built a new road where, according to the map, there had previ­ously been a path. You have to take the road, and then pick up the cycleway again just before the 5-kilometre mark.

At a certain point, the section of decom­mis­sioned railway line comes to an end, and the cycleway turns toward Gossensaß, following the rail line. The even gradient gives way to more up and down. The route comes down to Gossensaß (Colle Isarco).

After Gossensaß the cycle route crosses over the autobahn and, makes a short climb up the valley side, following country lanes into the little hamlet of Oberried (Novale di Sopra). The short uphill enables you to avoid a series of three tunnels on the main road.

After Oberried the route descends again towards the river. You cross over the Eisack and continue beside the main road (SS 12) into Sterzing (Vipiteno).

The final stretch into Sterzing is pretty uninter­esting, but Sterzing itself more than makes up for it. The radroute takes you down the town’s medieval altstadt and the stadtplatz (town square) with the iconic Zwölferturm (tower of the twelve) — the fifteenth-century tower that separates the Altstadt from the neustadt (New Town).

Sterzing is one of the most attractive towns in the region, and the section of the route through the Altstadt and Neustadt is a definite highlight, so take your time. If they are open, take a few minutes to see the 15th-century frescoes in the Heilig Geist Spitalkirche on the corner of the stadtplatz opposite the Zwölferturm. The Pfarrkirche Unsere Liebe Frau im Moos (the parish church of Our Lady in the Moss) is also worth a short detour. It has some beautiful wooden pews — each one individually carved for the family, but the together they add up to a harmo­nious whole.

Coming out of Sterzing you need to follow the signs for the Radroute Brixen-Bozen (Percorso Ciclabile Bressanone-Bolzano). There are blue signs for the MV route and also for the Südtirol Radweg.

As you pass the landing strip, you should be able to see the Burg Reifenstein on your left. The castle is claimed to be one of the best-preserved castles in the Südtirol. It is visitable, but check the opening times on sterzing.com: Burg Reifenstein.

After Sterzing there’s a stretch of where the route runs beside the autobahn for nearly four kilometres. It’s not unpleasant, but it is a little dull. This section comes to an end as you cross over the bridge and the route arrives at the charming village of Stilfs (Stilves). Look out for the water fountain in the little square.

From Stilfs you take a gorgeous, quiet road that skirts the edge of woodland. The section of quiet lanes takes you through a couple of small villages and is one of my favourite parts of the route. 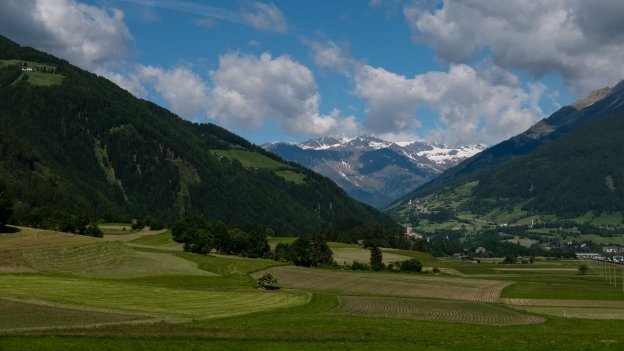 The next section, of traffic-free cycleway, is less scenic, but still, a lovely cruisey ride that comes to an end when you turn left and go under the railway line and ride into the pretty village of Mittewald on the banks of the Eisack. There’s a nice little gasthof just before you get to the bridge over the river.

After the bridge there is then a roadside cycleway which takes you for 700 metres and at that point, there should be another bridge to take you over the main road and on to Fortezza Franzensfeste. Unfortunately, the bridge and cycleway are closed due to work on the Brenner Base Tunnel. I was told that this is a permanent closure and the cycleway will be rerouted. In the meantime, you have to take the main road (the SS12) for a couple of kilometres. Fortunately, the SS 12 at this point is quite wide, and if you are heading north-south, it is downhill.

There’s a short section of roadside cycleway then the route crosses over the river and comes to the station at Franzensfeste Fortezza.

After the village, the route heads for the fortress itself. This is one of the narrowest points in the Eisack valley and the railway line, autobahn and the Staatsstraße squeeze into a narrow strip of land between the valley side and a reservoir — with the cycleway threading its way through the gaps. 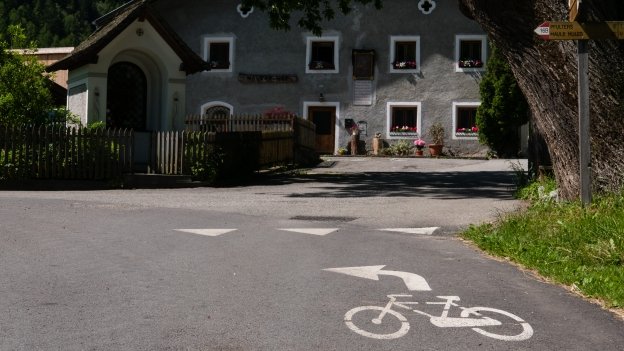 Just before the fortress, you come to a junction where the cycle route divides. From here the main München-Venezia route goes left and on towards Muhlbach and Bruneck (Brunico) in the Pustertal. There is a variant of the München-Venezia that goes to Brixen (Bressanone). There’s more about the variant here: italy-cycling-guide.info: München Venezia — Brixen variant. 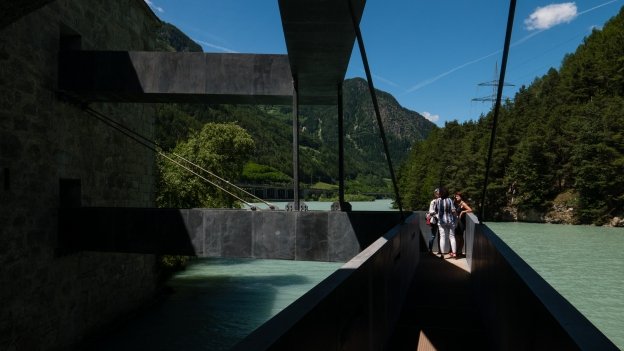 The Festung Franzensfeste was constructed by the Austro-Hungarian empire. It is one of many military follies built in the nineteenth and twentieth century across the arc of the Alps.

The fortress was built of blocks of granite brought here from Pfalzen five hours away by horse-drawn cart. A stone­cutter needed four days to create a perfect block by hand. Not surpris­ingly the fortress cost a huge amount of money to build (the equivalent of 400 million euros), and the Kaiser Ferdinand I is alleged to have said at the opening ceremony that, given the cost, he had been expecting a fortress of pure silver.

Today the building has been converted into a series of atmospheric exhib­ition spaces and is well worth the short detour to get to it.

The permanent exhib­ition about the history of the fortress itself is in three languages. There is then an exhib­ition dedicated to the history of the railways in the area which is in Italian and German only. There’s also an InfoPoint dedicated to the Brenner Base tunnel project. If you’re inter­ested, they offer visits to the tunnel itself on Fridays at 10:00 and 14:00 (reser­vation required). For inform­ation and reser­va­tions see bbtinfo.eu.

Sterzing (Vipiteno) is the main tourist destin­ation in the area. There’s lots of accom­mod­ation in and around the town, but not much after it until you get to Muhlbach (Rio di Pusteria).

There is a hostel at Brixen: the Jugendherberge Brixen.

The only campsite on this section of the route is the Camping Gilfenklamm, a couple of kilometres on from Sterzing. It has a pleasant area for tents and is very reasonably priced for the area — it’s been a long time since I paid less than €10 for a night at a campsite (although once the tourist tax was added on, it came to €10.20).

The line between Brenner and Fortezza Franzensfeste/Brixen is served by three train companies:

Note that you must have a bike ticket to travel on the Trenitalia and SAD services, and sadly the tickets for one company aren’t valid on the others’ services. To travel on the Eurocity services you need to reserve a bike place (cost 10€) in advance. 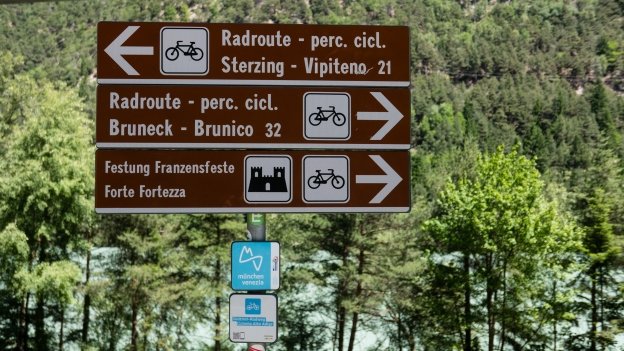 Signs on the Brennerradroute near Franzensfeste (Fortezza). Route markers for the München-Venezia and Südtirol Radweg (Ciclovia Alto Adige) cycle routes