If you have the time, or you have decided to stay the night in the area, then Pieve di Cadore is well worth a visit. The town is best known as the birth­place of the artist Titian (Tiziano Vecellio to give him his proper name). You can visit the house where he was born and grew up (the Casa Natale di Tiziano Vecellio, although he left for Venezia to become an apprentice in the studio of Gentile Bellini when he was about eleven years old.

On the Piazza Tiziano you’ll find the Palazzo della Magnifica Comunità di Cadore (on the Piazza Tiziano). The Magnifica Comunità di Cadore (literally Magnificent Community of Cadore) was one of several ‘magni­ficent communities’ across the Dolomites. Established in the early 13th century they were an early example of democratic self-government. The magnifica comunità brought together repres­ent­atives of the 27 regole in the Cadore. The regole were where the people who lived in an area came together to agree on how to manage the resources they owned in common (the pastures and forests, and water for example).

The magnifica comunità and the regole continue to exist — although they lost their legal status in 1807 when Napoleon replaced them with the modern comuni (local councils). 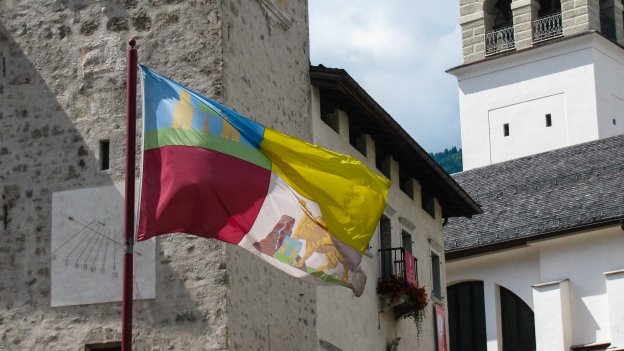 The flag of the Magnifica Comunità di Cadore. Picture by Edowikip CC BY-SA 3.0) via Wikimedia Commons

Pieve di Cadore also has a museum dedicated to glasses (as in spectacles), the Museo dell’Occhiale. For some reason this part of Italy became an important centre for the manufac­turing glasses. The biggest and best-known of the firms to come from the area is Luxottica which was founded in nearby Agordo, and still has a factory there. Luxottica’s went onto become a global conglom­erate — so much so that according to Google, one of the questions people ask is ‘What glasses companies are not owned by Luxottica?’

A ten-minute walk (uphill) from the Museo dell’Occhiale is the Forte Monte Ricco. An atmospheric nineteenth century fortress built above Pieve di Cadore. During the First World War, the fortress was blown up by the Italians and then again by the Austrians, but has now been carefully restored.

The Casa Natale di Tiziano Vecellio is open every day from late May to mi-October from 10:00-12:30 and from15:30-18:30 (open all day from mid-July to the end of August). Check opening hours: magnificacomunitadicadore.it.

The Forte Monte Ricco is open from 10:00-13:00 and from 15:30-19:00 from May to September (open every day in July and August. Closed on Mondays in other months). Check opening hours etc here: museodellocchiale.it: Forte di Monte Ricco.

Ticket prices: you can buy tickets for the museums individually or a combined tickets (biglietto cumulativo). The biglietto cumulativo for the Palazzo della Magnifica Comunità, Museo dell’Occhiale, and Casa Natale di Tiziano Vecellio costs 7.5€, and a ticket for the three museums plus the Forte Monte Ricco costs 10€.