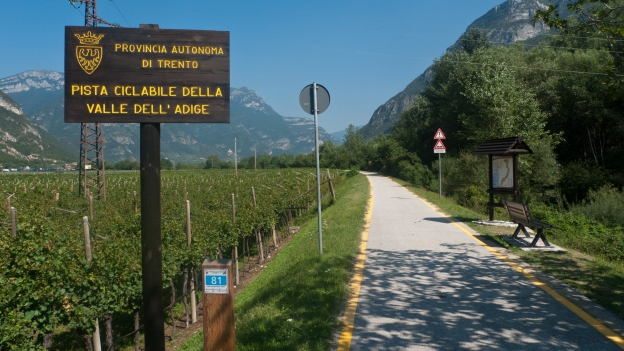 Traffic-free cycleways to Verona and then quiet roads

Predominantly surfaced roads or cycleways. There are a couple of sections of unsur­faced rural roads as you get closer to Ostiglia, but these are very short, and avoidable.

The section to Verona is mainly a cruise along waterside cycleways into Verona, with only a short climb at Rivoli Veronese (you’ll notice the spike in the altitude profile). From Verona the route is on quiet roads as it detour out from Verona to the Custoza wine country. It then heads for the pretty town of Villafranca di Verona, before continuing on across country to Ostiglia on the river Po.

The Verona variant continues to follow the river Adige. It passes Rovereto 24 kilometres further on. The cycleway bypasses the city itself and it’s possible to simply continue on without visiting Rovereto but again it’s well worth making the detour.

Rovereto is an attractive town with a strong Venetian influence. It’s home to MART (Museo d’Arte Moderna e Contemporanea di Trento e Rovereto). Linked to the the MART is the Casa d’Arte Futurista Depero which houses the collection of the local Futurist artist. There’s a map of the location of the two museums here (MART: opening times and ticket prices). 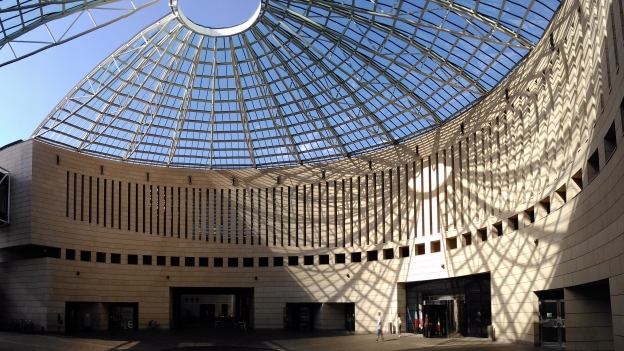 The MART in Rovereto. Picture by Airon90. Source: Wikimedia Commons

Above the city on the Colle Miravalle, is the Campana dei Caduti (Bell of the Fallen - also called the Bell of Peace, and the Maria Dolens). The bell, the largest in the world, was cast after the First World War using brass from cannons used by all of the countries involved in the war. It tolls everyday at 9.30pm and midday on Sundays. 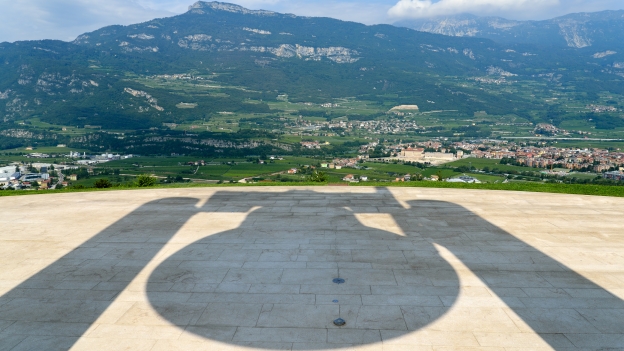 The Trentino was on the front line in the First World War and was the scene of widespread devast­ation, with villages entirely destroyed and in some cases villagers deported. In Rovereto the Castello di Rovereto houses one of Italy’s major museums about the war

At Mori, a little way beyond Rovereto, you have the option of taking another cycleway which will take you to Torbole and Riva del Garda on the Lago di Garda.

After Mori you come to the border between the Trentino and the Veneto. It used to be that the Valle dell’Adige Trentino cycleway came to abrupt stop and from there you had to take local roads for a couple of kilometres before picking up the Valle dell’Adige Sole cycleway which continues south towards Verona. That’s all changed with with the opening in September 2015 of a new stretch of cycleway. At the end of the Trentino section you turn right, and when you get to the road should see the beginning of the new cycleway on the other side and a little to the left.

The Veneto cycleway follows the Canale Biffis, through the villages of Belluno Veronese and, and on towards the village of Rivoli Veronese where it makes a short climb with views over the Forte Rivoli, (Forte Wohlgemuth) —now the Museo Walter Rama. You have another oppor­tunity to turn off towards the Lago di Garda. From Rivoli Veronese there’s a very straight­forward ride into Verona.

There’s a video (11:38 min) about the Ciclabile Valle dell’Adige Sole. It’s in Italian but it will give you a pretty good idea of what the cycleway is like. (Credit: Verona Report).

Star sight is the Arena di Verona centrepiece of the Piazza Bra. It vies with the Colosseum for the title of Italy’s most spectacular roman arena. In summer its used as a venue for opera perform­ances as well as contem­porary music: the arena defin­itely seems to be the top choice for artists wanting to film a live performance. You can also ride over the medieval Ponte Castelvecchio (Ponte Scaligero) complete with swallow-tail battlements.

Otherwise the centro storico in the bend in the river, is a great place to wander round.

Verona markets itself as the City of Lovers and there are plenty of attempts to cash-in on the story of Romeo and Juliet. And there’s the Casa di Giulietta (Juliet’s house). I’ve given it a miss, but there’s a very pictur­esque balcony …

It’s worth climbing the steps that lead to the Castel San Pietro for great views over the city and the Roman theatre. The Re Teodorico has a terraced bar which is a great place to have a drink. The extraordinary Castel San Pietro campsite (which is literally inside the ruins of the castle) is close by. 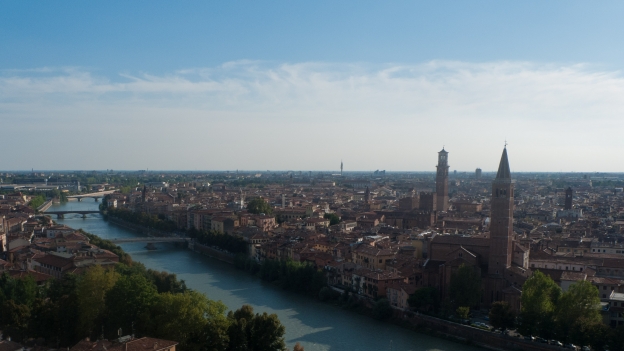 View of Verona from the steps to the castello

Coming out of Verona the route makes a bit of a detour via Sommacompagna. The route is on relat­ively quiet roads and I would resist the temptation to try to improvise a short cut: you’d be lucky to find a better route out of Verona

Sommacampagna is the main town in the Custoza wine-growing area. Custoza itself is a little further on. As you approach the village, on the skyline you’ll see the ossario, topped by by a tall obelisk. The ossario holds the remains of over 13,000 Austrian and Italian soldiers killed in the Battle of Custoza in 1866.

The other landmark is the Villa Pignati. The road passes one of the villa’s façades before turning to pass below it on the other side. Take a moment to admire the view of vineyards stretching out before you, and he Veneto plain stretching into the distance. Here’s a short video that will give you a flavour of what to expect.

The route takes you into the wine country where they make Custoza white wine. It’s unique as a wine that has no dominant grape variety: it’s a blend of three native types of grape. This gives the winemakers scope to create their own distinctive blends. I don’t know why it’s overshadowed by the better-known Soave (which comes from the hills on the other side of Verona): it defin­itely doesn’t deserve to be. Custoza is one of those things that you usually won’t come across at home so make the most of your chance to try them here. 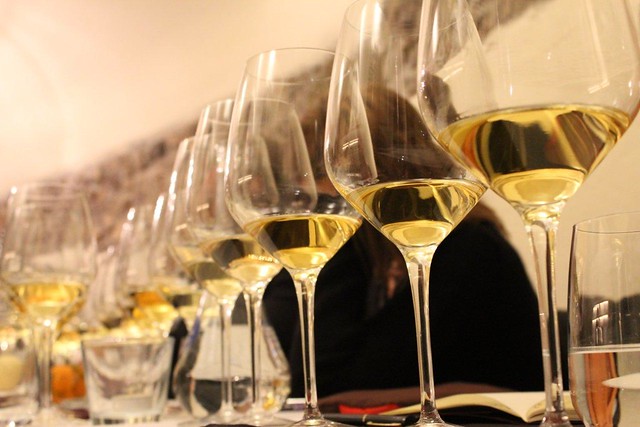 The local author­ities for the area have created a number of signed cycle routes in the area, and you may have noticed the signs. The route through the centre of Villafranca di Verona looks like it might be a better choice than the official Via Claudia route.

Villafranca gets its name from its origin as a tax-free zone that was estab­lished in the 12th century in an effort to encourage people to settle there and drain what was then marshland. Look out for it medieval Castello Scaligero.

After Villafranca you continue to nearby and Povegliano Veronese. After Povegliano the route is through the countryside of the Po valley. The main crop is the Vialone Nano rice (a type of rice used for risotto). If you come in May the rice fields are still underwater.

A little way outside Ostiglia, you come to the embankment beside the Po where you turn left and head for Ostiglia. Ostiglia gets its name from the roman Hostilia, and the end of one of the branches of the old Roman road, although so far as I know there no roman remains to see.

At Ostiglia option you can connect with the Ciclovia del Po (Po cycleway), part of eurovelo 8, which will take you east to the Adriatic coast or west to Milano and Torino.

Much of the cycleway south from Bozen coincides with the Ciclovia del Sole (eurovelo 7) cycle route. The two routes divide north of Verona, and the Ciclovia del Sole heads for Bardolino on the Lago di Garda - and from there it heads south to Mantova and on towards Rome and southern Italy.

Work is already well underway to build a new cycleway on the old railway line between Verona and Bologna. The section in Emilia Romagna will be 46 kilometres long (of which 32 kilometres on the old rail line) and is due to open in 2020. The Emilia Romagna section ends close to Ostiglia, so you should soon have the option of continuing on from Ostiglia to Bologna. I don’t know what the timescale is for extending the new cycleway to Verona.

There’s just one campsite on the route between Trento and Verona - the agriturismo/agricamping at Brentino Belluno (the Agriturismo Revena). Update: I’ve just discovered a couple of others: the Agriturismo Locanda de L’Arguta just off the route, a little way south of Trento. There’s another agricampeggio — the Albero delle Mele (Apple Tree) at Loppio on the cycleway between Mori and Torbole on the Lago di Garda. It looked like a nice place, but it is a bit of a detour off the main route.

There are lots of sites on the Lago di Garda so you could detour to the lake. In Verona itself there’s the Camping Castel San Pietro - located inside the old castle - and possibly the most unusual campsite in Italy. After Verona there’s a campsite close to Villafranca di Verona (the Agricamping Tione).

Ostiglia is on the train line between Verona and Bologna. There’s also a station at Isola della Scala.

If you are planning to return by train, DeutscheBahn operate a train service to München (Munich) with a dedicated carriage for bikes.

This leg of the route passes close to Verona airport which offers an unexpec­tedly wide range of destin­a­tions.