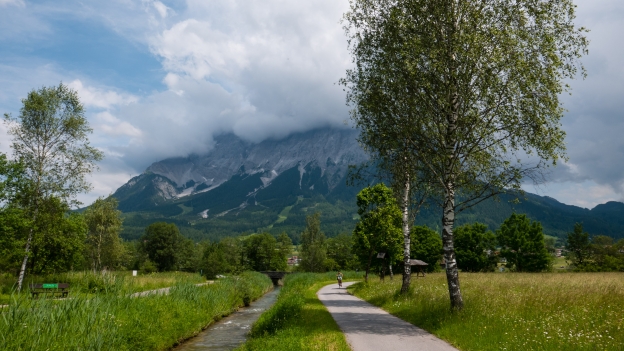 The Via Claudia near Biberwier

Moderate. This section involves more climbing than the section through Bavaria, but there are no really big climbs —and the climb to the Fernpass can be avoided by taking the shuttle.

A higher proportion of the route is on unsur­faced cycleway or forest road. Note in particular that the climb to and from the Fernpass is on mountain bike trail which at points is steep

Leaving Füssen and crossing the border into Austria you are now very much in the mountains. Until now the route has followed the Lech river, but it now leaves the river behind and heads for the Fernpass before descending into the valley of the Inn river. Increasingly it’s the landscape that’s the main highlight, but there are some inter­esting places along the way including the towns of Reutte and Imst.

At Imst you could turn left instead of right and follow the Innradweg to Innsbruck (and on to Pasau) .

Just after the Lechfall you may notice that the cycle route signs abruptly change - the most obvious indic­ation that you’ve just crossed the border into Austria (Österreich). Quiet roads take you into Reutte. 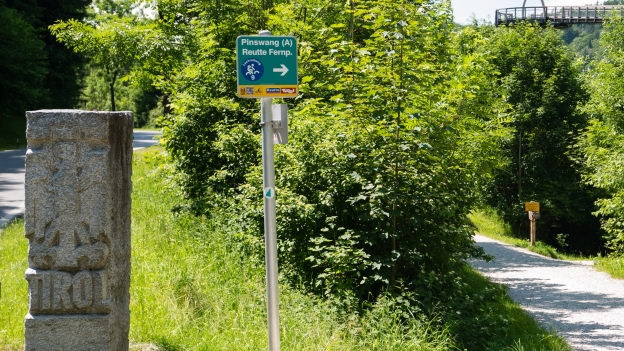 Austrian cycle route signs at the border near Füssen

As you come into Reutte along the Untermarkt look out for the Zeillerplatz (on your right-hand side opposite the Zum Mohren hotel). The name celeb­rates the Zeiller dynasty of painters who were based in Reutte and lived in the house (the Zeillerhaus) that looks out onto the platz. It was first owned by Paul Zeiller but the frescoes are the work of his son Johann Jakob Zeiller who also decorated the façade of the nearby Grunehaus (Green House) - now the Reutte museum. 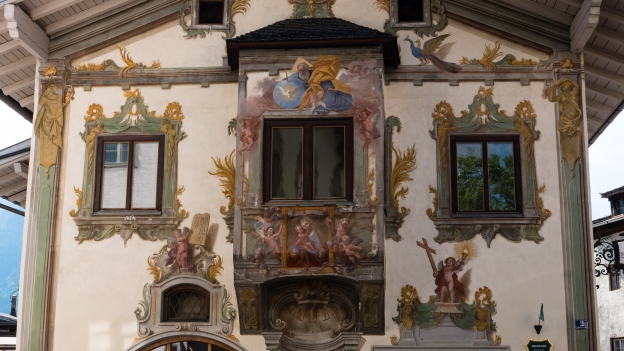 Reutte the Zeiller Haus with frescoes by Johann Jakob Zeiller

The route climbs from Reutte to the Ehrenberg Klause. Initially the climb is quite steep. The Klause was a forti­fic­ation built to control (and of course tax) trade along this route - partic­u­larly the trade in salt. High above, on one side of the narrow valley, are the ruins of the Ehrenberg castle, and on the other side the Festung Schlosskopf and Fort Claudia (built in the 18th century). Linking the two is the Highline 179, claimed to be the world’s longest pedes­trian suspension bridge. The complex includes a guest­house and restaurant so you could break your journey here. Information: ehrenberg.at (de only).

After the Klause you continue to climb, mainly on an unsur­faced road, to 1125m, before descending again into the village of Heiterwang. As you come into Heiterwang look out for the murals on the façade of the Gasthof Post. The route climbs towards Lahn before descending towards the village (and resort) of Lermoos which lies in a bowl surrounded by mountains.

To the Fernpass and the Inntal

Between Lermoos and Biberwier the route crosses a high plain that was once marshland. The Romans could have skirted round the marsh, but instead they opted to build the road straight across it. To do so they needed to fell tens of thousands of trees which were laid into a wide trench to form a platform and then they put thousands of tons gravel on top to form the found­a­tions for the road. All of this was of course done using hand tools and materials were carried in baskets. Look out for an inform­ation board showing arche­olo­gists excav­ating the old road. 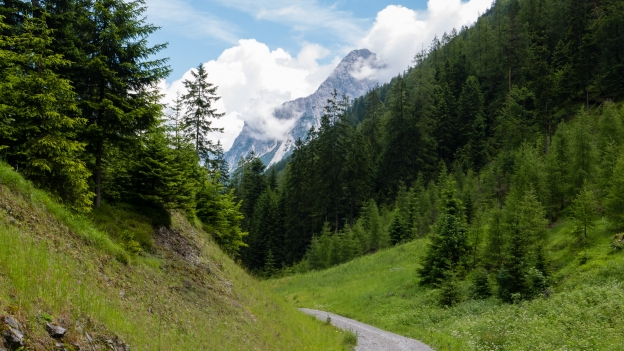 The climb from Biberwier to the Fernpass (looking towards Biberwier)

Although the climb to the Fernpass isn’t partic­u­larly big, the descent from it is marked as a mountain bike route ( warning sign). It’s a lovely route, but a little tricky in places, and really is most suitable for those with mountain bikes. I did see people with trekking bikes doing this part of the route so it is do-able, but whether they enjoyed the exper­ience I don’t know.

If you are heavily loaded, or towing a trailer, I would defin­itely consider taking the shuttle. I don’t think that the road is a realistic altern­ative. I saw no-bikes signs near Heiterwang (there are long tunnels near both Heiterwang and Lermoos) I think this just applies to those particular sections of the road, but the road is narrow and seemed fairly busy with quite a few lorries, so even if it is legal I wouldn’t recommend it.

For more inform­ation see the Transport and services and Resources sections later on. Note: you need to book!

From the Fernpass the route descends down to Imst (827m) and the banks of the Inn river. Along the way you pass through the old Burg Fernstein customs post with the ruins of the Schloss Fernstein castle on the hill above. 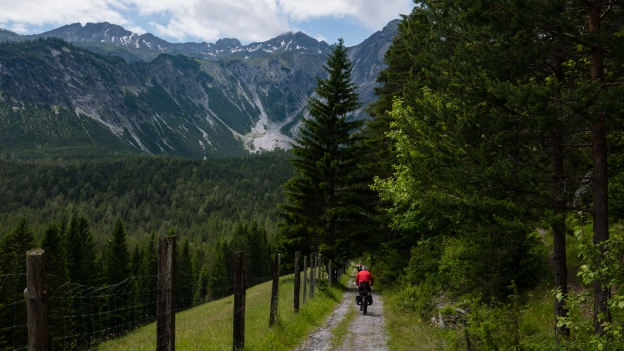 Cyclists on the Via Claudia descending from the Fernpass

Imst - The City of Fountains

The trail takes you through the passing through Nassereith (843m). Another enjoyable stretch takes you into Imst.

As you come into Imst, look out for the Pfarrkirche (church) on the right-hand side. Many of the frescoes on the side are faded, but there’s a well-preserved Saint Christopher.

Also look out for the fountains. Imst has more than fountains dating from the 18th, 19th and 20th centuries. The route takes you past a number of them. There’s lots of inform­ation on the local tourist inform­ation website: imst.at: City of Fountains . You can also download a pdf of the brochure (de only) about the brunnen ( imst.at: Brunnenfolder).

If you have the time you can also walk the Rosengartenschlucht (Rosengarten river gorge) which is just outside the centre of Imst. 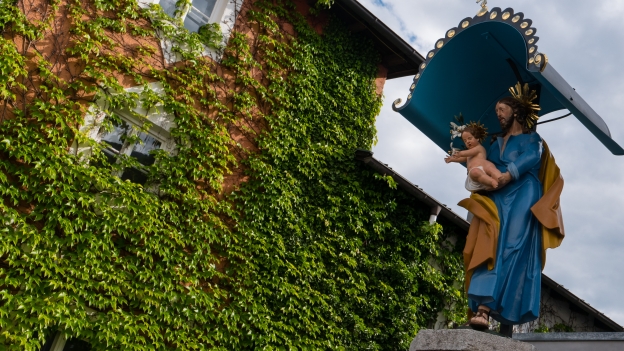 The reutte.com and imst.at websites have accom­mod­ation search and booking facilities:

So far as I know, there are no hostels on this section of the route.

In Reutte I stayed at the Camping Reutte on the outskirts of the town. Further on there’s a campsite a little way off the route beside the Heiterwangsee near, you guessed it, Heiterwang.

In Biberwier: I stayed at the Biberhof which is quite literally on the route itself. There’s another site nearby (the Alpencamp Marienberg). I think Biberwier is a better option than Lermoos to break for the night.

There are a couple of sites on the other side of the Fernpass: the Fernsteinsee which is right on the route as you descend from the pass, and the Camping Rossbach in nearby Nassereith.

In Imst I stayed at the aktivCamping Imst a nice site with a friendly, helpful owner. Also in Imst (and also a good site) is the CampingPark Imst-West

There’s a railway line between Landeck and Innsbruck, with a station near Imst.

Shuttle over the Fernpass

There is a shuttle over the pass. Please download the pdf timetable leaflet (see Resources section below). According to the timetable leaflet, the bus runs from the MPreis super­market in Biberwier and the Postplatz in Nassereith.

Booking your place on the shuttle

There is a booking system for all the shuttles, except for the bus to Nauders which is a regular public bus service. The pdf timetable leaflets give instruc­tions on what you need to do: it’s pretty straight­forward. The website says Bitte spätesten 24 Stunden vorher reser­vieren! (Please reserve at least 24 hours in advance!). The services are run by private companies, mostly local taxi firms, and if they have no bookings they probably aren’t going to keep the driver hanging around. If you leave it to chance, you may arrive and find that they have given the driver the day off, or found them something else to do. 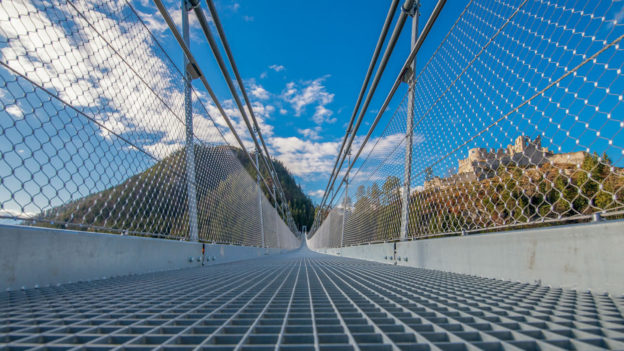