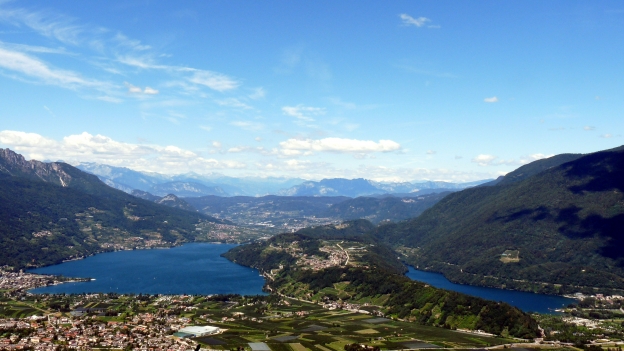 Verona or Venezia? Options at Trento

The Via Claudia divides here with one branch continuing beside the river towards Rovereto and on from there to Verona. If you’ve already decided to head for Verona then you can simply skip to part 13 of this series, The Via Claudia: Trento to Verona and Ostiglia.

Moderately challenging. There’s a 2.3-kilometre climb with an altitude gain of just under 200 metres. You can avoid this by taking the train or the Via Claudia shuttle.

Mainly quiet roads, but note that the official route has a climb out of Trento on a narrow and fairly busy road. I have suggested an altern­ative route that uses cycleways to avoid this bit, but if in doubt take the train or shuttle.

Mainly surfaced roads and cycleways. There is a short unsur­faced section which you can avoid.

This section is only partially signed. 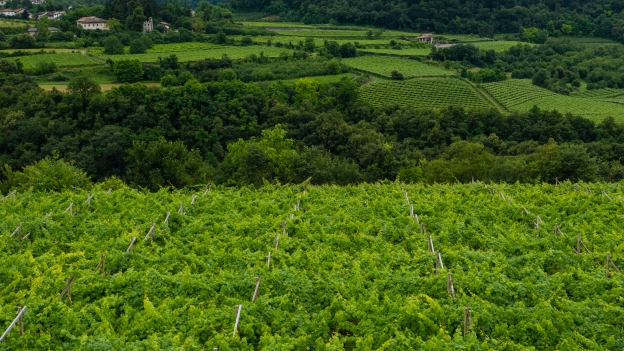 Vineyards in the hills above Trento

This section of the route climbs from to San Cristoforo al Lago on the Lago di Caldonazzo in the hills above the city. At San Cristoforo you pick up the Ciclabile della Valsugana, a top-quality cycleway that follows the Brenta river through the deep gorge of the Canale del Brenta. The only problem is that it starts at the Lago di Caldonazzo in the hills above Trento, and the climb to get there can be a little tricky. The Valsugana cycleway is one of the highlights of the Via Claudia so don’t be put off.

On this section there is defin­itely a case for consid­ering treating yourself to a ride on the shuttle or the train. There’s a Via Claudia shuttle that runs twice a day from Trento station to Pergine Valsugana. In July and August, there’s a special bike carriage with 32 bike spaces, but for the rest of the year there are 6 bike spaces.

I’ve ridden this route a couple of times. The first time was in 2011 and I can still remember the climb out of Trento on a narrow, busy road. The drivers were absolutely fine, but it was still a bit stressful. So I was pleased to see that the route out of Trento had changed. The only problem is that, as I discovered, it still involves the same bit of road. And to make matters worse, having made the horrible little climb on the narrow road, you then go back down the other side of the hill. The route I describe here is an altern­ative that uses cycleways to take you out of the centre of Trento and joins the official route at Centochiavi. I’ve included maps and gps track for both options in the downloads. You could also turn off the route at Lavis in the previous section and head direct for Centochiavi, but it would be a pity to miss Trento.

The route starts on the riverside and follows the river to the Ponte San Giorgio where you turn right onto the Via Giovanni Pedrotti and then at the round­about you turn left onto the via Ezio Maccani. The cycleway is on the right-hand side of the road. It’s surfaced with red asphalt so you can’t really miss it. This cycleway (shown on Open Street Map maps with a number 2) continues to a big round­about where it turns right and then beside the main road (but protected from it by a barrier) to another round­about on the Via Brennero where you join the route 1. You follow this along the Via Pranzelores until you get to a small park and the cycleway turns right. Stay on the cycleway on the Via Gilli until it comes to an end, and then turn left at the next junction onto the Via Centochiavi. You are now back on the official route.

The route goes from here to Centochiavi and another park (the Parco di Melta) and opposite it the Bar Melta. The route turns right here. the turning (the Via Melta) is directly next to the bar. There’s an initial very short sketchy, unsur­faced bit, that’s marked as a private road. If you prefer to avoid this you can take the turning before the Via Melta (the Via Carneri). From here it’s all fairly straight­forward although the lane climbs pretty steeply for the next couple of kilometres. The worst of the climb is behind you as the lane comes out onto another road where you turn right and head for Martignano and then Cognola. 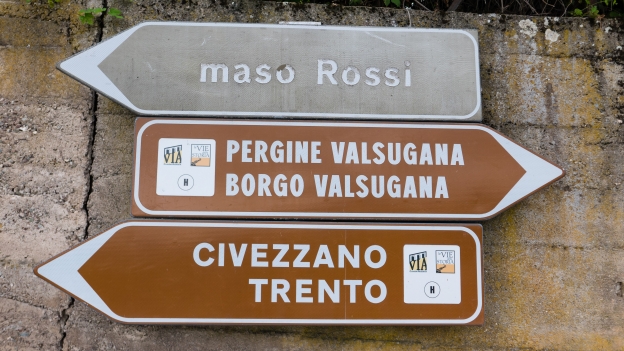 Signs on the Via Claudia in the Trentino

From Cognola the route heads for Civezzano. On the way it passes through the fortified complex (Forte Civezzano/Tagliata Stradale Superiore di Civezzano/Obere Strassenspere Civezzano). The complex is part of a system of forti­fic­a­tions built by the Austro-Hungarian empire in the nineteenth century to control its border with Italy.

A little further on from Civezzano itself you come out onto the SP83, and a little further on again there’s a round­about. Just after the round­about on the left-hand side of the road there are Via Claudia signs pointing to a track. Ignore them (and ignore your guidebook if it is saying go that way). The climb on the track is a complete pain. Just stay on the road as it heads for Madrano. 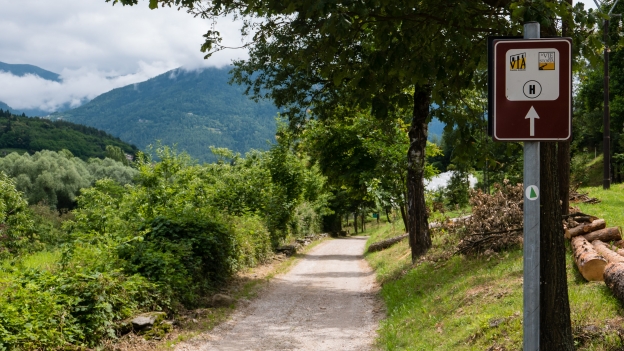 At Madrano you leave the SP83 and take a country lane (the Via Valdigola) which heads through a nature reserve —the Biotopo Lago Pudro turns into an unsur­faced track. I enjoyed it (and I’ll admit I’ve done a lot of whingeing about this section of the route so far), but if the words ‘unsur­faced track’ make you start to sweat then you can take the Via Tessara out of Madrano towards Vigalzano. From Vigalzano simply continue on into Pergine Valsugana and then to San Cristoforo al Lago and the start of the Valsugana cycleway.

So far as I know, there are no hostels on the route — although there is one in Trento.

There are lots of campsites around the Lago di Caldonazzo and the nearby Lago di Levico.

There is a train service with trains running at least once an hour. In July and August, there’s a special bike carriage with 32 bike spaces, but for the rest of the year, there are 6 bike spaces. You can reserve places by calling +39 0461 821 000 before 16:00 on the day before you plan to travel.

The train line from Trento continues through the Brenta river gorge to Bassano del Grappa and beyond.

There are a couple of shuttle buses a day - one in the morning and one in the late afternoon.

Both the train and the shuttle leave from the main Trento station (not the next-door Trentino Trasporti station).

Booking your place on the shuttle

There is a booking system for all the shuttles, except for the bus to Nauders which is a regular public bus service. The pdf timetable leaflets give instruc­tions on what you need to do: it’s pretty straight­forward. The website says Bitte spätesten 24 Stunden vorher reser­vieren! (Please reserve at least 24 hours in advance!). The services are run by private companies, mostly local taxi firms, and if they have no bookings they probably aren’t going to keep the driver hanging around. If you leave it to chance, you may arrive and find that they have given the driver the day off, or found them something else to do.

Information about shuttles and trains

You can check train times on trenitalia.com. You can also download a pdf copy of the timetables for the Trentino Trasporti trains from the train section of the company’s website: trentinotrasporti.it: train (look for the link that says Trento - Borgo V. - Bassano).