The third option at the Lago di Caldonazzo is to stay on the Valsugana, and continue on to Bassano del Grappa. A beautiful and historic Veneto town on the banks of the Brenta river. After Bassano del Grappa you can rejoin the main route at Treviso.

79 kilometres (but note that the traffic-free section section of the route is 55 kilometres long).

The final 24 kilometres of the route are on public roads. On the whole these are very quiet, but they get busier as you approach Bassano-del-Grappa.

Well signed. the local tourist promotion author­ities produce a handy little map that you can put in your pocket (although it really would be hard to get lost).

The Ciclabile della Valsugana (Valsugana cycleway) is one of Italy’s top cycleways and is rightly very popular. It starts at the Lago di Caldonazzo, high in the hills above Trento, and follows the Brenta river as it heads from its source to the Adriatic coast. It heads into the Canale del Brenta a deep river gorge that carves its way between the Altopiano di Asiago and the Massiccio del Grappa. At the deepest point of the Canale the walls of the gorge are over 800 metres high.

After Grigno there’s the bicigrill at Tezze Valsugana. A bicigrill is the cycling version of the autogrill on the Italian autostrade. For me this is an oblig­atory stop although there is another bicigrill a 8 kilometres further on at Piovega di Sotto. Or you could stop at both.

The section from Tezze takes you into the Veneto. This is perhaps the most scenic section of the route as the canale narrows and the walls of the gorge tower over you.

Further on, at Piovega del Sotto, there’s another bicigrill and the end of the traffic-free part of the cycleway. From here the route continues on a strada comunale into Valstagna. The road is very quiet and initially you won’t see more than the occasional car. 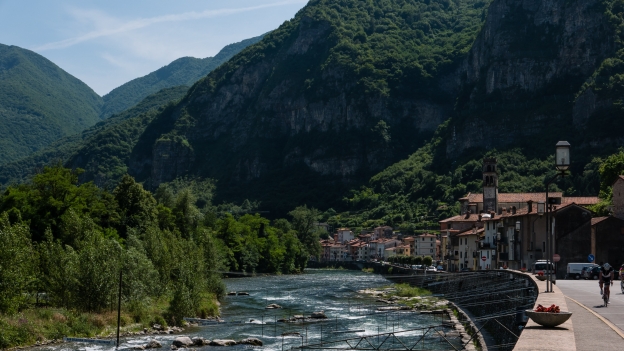 Valstagna is linked by a stone roadway - the Calà del Sasso (en.wikipedia.org: Calà del Sasso) to the village of Sasso — 810 metres (altitude), and 4444 steps, above on the Altopiano di Asiago. The Calà was used to transport logs down to Valstagna, and from there they were trans­ported by river to Venezia. According to the Italian wikipedia page (it.wikipedia.org: Calà del Sasso), in 1999, Alberto Limatore rode a bike up the Calà without putting a foot down even once.

The Calà del Sasso between Valstagna and Sasso (Veneto). Photo by fabyr

The local tradition is that if a couple walk the Calà hand in hand they will stay in love forever.

The logs were trans­ported from Valstagna by the zattieri (rafters) who sailed rafts of logs down the river . The opening of the railway in the nineteenth century was the end of the zattieri but they are commem­orated by the Palio delle Zattere The palio takes place on the last Sunday of July. Teams from nine contrade (neigh­bour­hoods), each consisting of three men and a damigella (damsel), get dressed up in medieval costumes and take to the river on rafts that don’t look much larger than a tabletop.

Flyer for the 2016 Palio delle Zattere

On its way into Bassano del Grappa the route passes the Grotte di Oliero . There are four caves - one that you visit by rowing boat - as well as three museums: one about caving, another about paper making, and an ethno­graphic museum.

The Ponte degli Alpini and the Grapperia Nardini

The town is famous for its bridge and for, you guessed it, grappa. The bridge was designed by the architect Andrea Palladio and is built in wood. The wooden construction and the striking design were intended to help the bridge withstand the force of the Brenta in flood. The present bridge is actually the third bridge built to Palladio’s design on the site. The bridge was rebuilt again in 1947 and is now commonly known as the Ponte degli Alpini (the Alpini are the military regiments recruited from the mountain areas). The bridge was blown up during the war and the Alpini raised the money to rebuild it: it had, and still has, a huge symbolic importance as the gateway to the Monte Grappa.

For more about what to see and do in and around go to the Places: Bassano del Grappa page.

There are several possible options from Bassano. The one I would recommend is to follow the Anello del Veneto (Veneto Ring) signposted regional route that takes you from Bassano del Grappa to Treviso where you can rejoin the main route.

The Anello del Veneto route takes you through the pretty hilltop town of Asolo. The list of famous residents includes the poets Robert and Elizabeth Browning, and the actor Eleonora Duse.

After Asolo, the route takes you to Maser and the Villa di Maser (also known as the Villa Barbaro). The villa was designed by the architect Andrea Palladio. It is one of 24 villas in and around Vicenza that have been recog­nised by UNESCO as a World Heritage site. 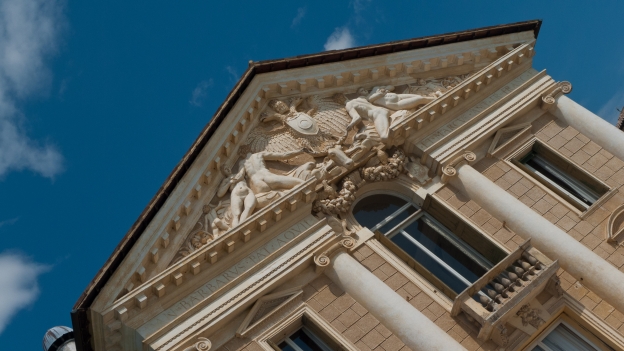 Part of the façade of the Villa di Maser (Palladio)

If you’ve never visited a Palladian villa, the Villa di Maser would be a great place to start. As well as the archi­tecture the interior is decorated with some fabulous trompe l’oiel frescos by Paolo Veronese. The frescoes are full of illusions and visual jokes: the most famous is the Stanza del Cane (room of the dog) which has, amidst all of the extra­vag­antly over-the-top fake columns, a little dog sat in front of a fake window. Check opening times on the villa’s website: villadimaser.it: inform­ation. 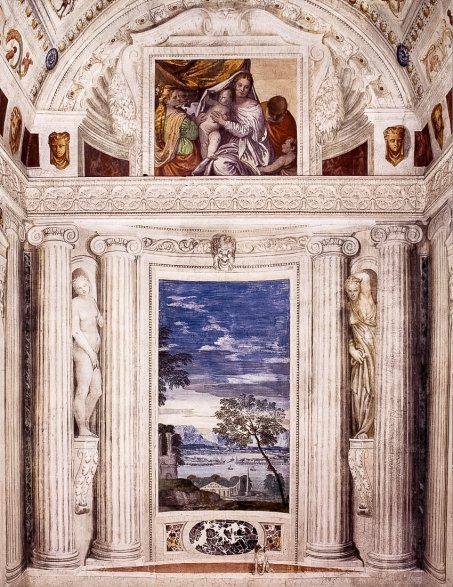 The Anello del Veneto route is signposted as the I2, although if you are using digital maps it may be shown on the map as the Bi-12. The route is circular, so you could head in the other direction to Vicenza. For more inform­ation about the route go to the veneto.eu website: veneto.eu: Veneto Ring.

So far as I know, there are no hostels on this part of the route.

The train line between Bassano del Grappa and Trento goes through the Valsugana, so you are never far from a station if you need one. There’s about one train an hour in each direction.

There are three bicigrill on the cycleway itself:

There are also cafes bars and restaurants in the villages that the route passes through: San Cristoforo al Lago, Caldonazzo, Borgo Valsugana, Valstagna and Bassano del Grappa. 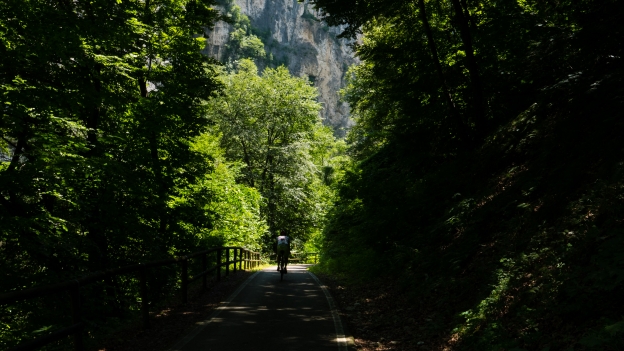 Cyclist on the Ciclabile della Valsugana cycleway near Enego (Veneto)