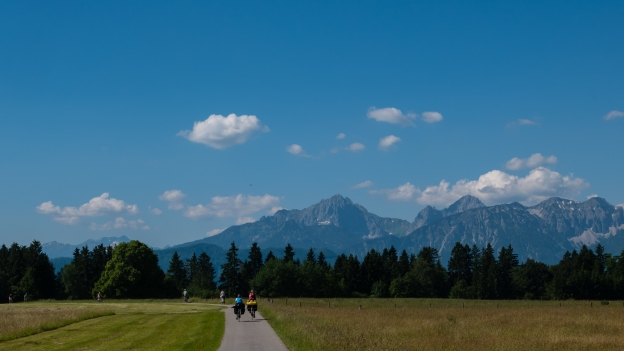 Cyclists on the Via Claudia near the Forggensee in Germany

326 kilometres (in Austria and Germany)

Fairly easy. If you are heading north-south there are some short climbs to the main passes but there are shuttles if you’d rather avoid these.

Mainly on traffic-free cycleways (although these may be roads that are restricted to agricul­tural vehicles so in summer expect to see tractors trundling round with trailers of freshly-mown hay).

Mainly on surfaced roads or cycleways. But note that there are some stretches on unsur­faced cycleways and forest roads.

Very well signposted. The route is signposted in both direc­tions. See note on signposting below.

May to September or October is probably the best time. The highest point on the route is 1512 metres so snow shouldn’t be a problem. Bear in mind that even in summer, the weather in the mountains can be unsettled.

The Via Claudia is an inter­na­tional cycle route that runs through southern Germany, Austria and Italy (with a brief section in Switzerland).

The route takes its name from the road build by the Roman emperor Claudius Augustus. The road became, and remained, one of the major routes for trade and travel across the Alps. The road linked the Donau (Danube) with the river Po and with the Adriatic coast near Venezia passing via Augusta Vindelicorum (modern-day Augsburg), Feltria (modern-day Feltre), Tridentum (Trento), Verona, and the river port of Hostiliae (Ostiglia) on the Po.

The route is about much more than the Roman remains - the route remains an important artery of commerce and cultural exchange for almost two millennia after it was built. In Austria you can visit the Ehrenberger Klause near Reutte and the Altfinstermünz near Pfunds which were both forti­fic­a­tions built to control, and tax, trade along the route.

The route through Germany and Austria follows the course of two major rivers:

From Martina you climb to the source of the third major river on the route: the Etsch/Adige which heads south through the Südtirol towards Verona. 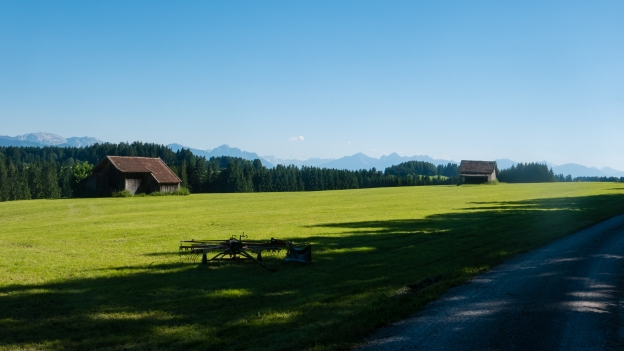 The Via Claudia near Burggen

In Germany probably the main must-sees are the cities of Augsburg (the former Roman city of Augusta) and Landsberg am Lech. As you get further south, there are the beautiful lakes of the Lechsee and Forggensee. Füssen at the end of the German section is an inter­esting city in its own right, but close to the iconic Neuschwanstein and Hohenschwangau castles which are some of the region’s major tourist attractions.

In Austria the natural scenery of the Alps is the star of the show, but along the route there are the attractive towns of Imst and Reutte and the villages of the Inntal. 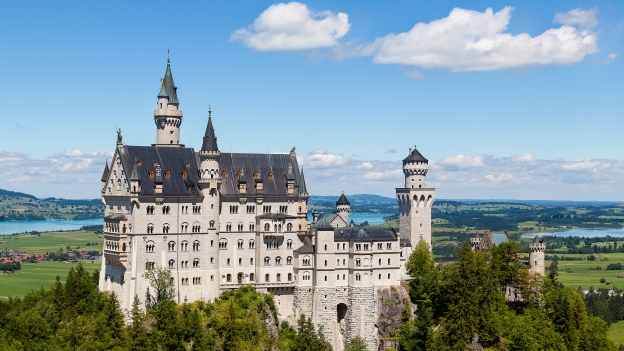 The Schloss Neuschwanstein near Schwangau. Photo by Thomas Wolf via Wikimedia Commons

There are a huge number of connec­tions with other cycleways along the route. At Donauwörth (pronounced “Donau-vurt’ by the way) it connects with the Donau Radweg (Danube cycleway) which from Donaueschingen in Germany to Budapest (and beyond).

The other major connection in Germany is with the D9 Romantische Straße (Romantic Road) cycle route which runs from Würtzburg to Füssen. In its southern part the Romantic Road goes through Donauwörth, Augsburg etc and at points the two routes coincide, but at others it offers an altern­ative option. The D9 takes you through both Augsburg and Landsberg am Lech while the VCA skirts round them - although it’s easy to make a side trip to visit them. You could of course use the Romantische Straße to reach Donauwörth - or to head north from there.

In Austria the major connection is with the Inn Radweg follows the Inn river from its source in the Engadine valley in Switzerland near Sankt Moritz to Passau on the Danube passing through Innsbruck and Rosenheim on the way. The Inn Radweg connects in turn with the München-Venezia cycle route, and so offers an altern­ative route into Italy or an altern­ative route to München. 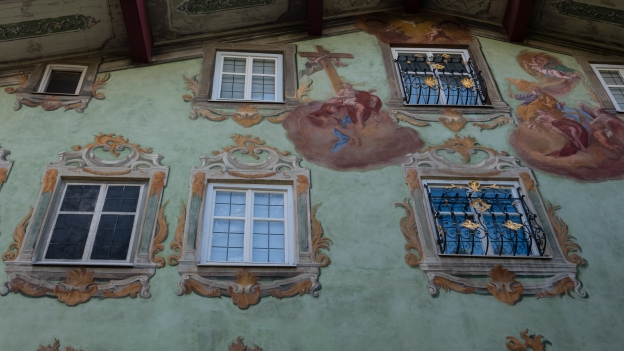 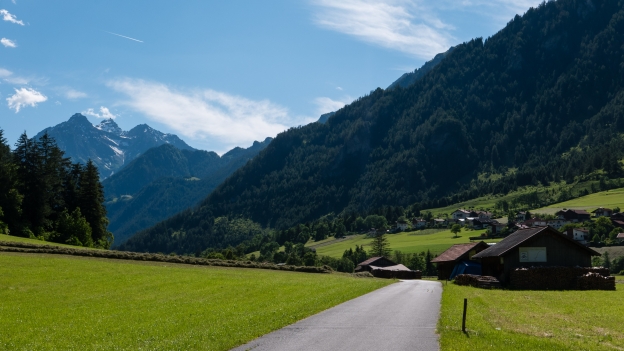 The Innradweg/Via Claudia near Pfunds

In Germany there are small panels with the VCA symbol to indicate the route. The only problem is that the same method is used for other cycling and walking routes, and the wealth of connec­tions means that at points there’s a bit of a risk of inform­ation overload. This is partic­u­larly true around Donauwörth and Füssen.

Click the photo below for a small slideshow of examples of signs from the German, Austrian and Italian sections of the route. 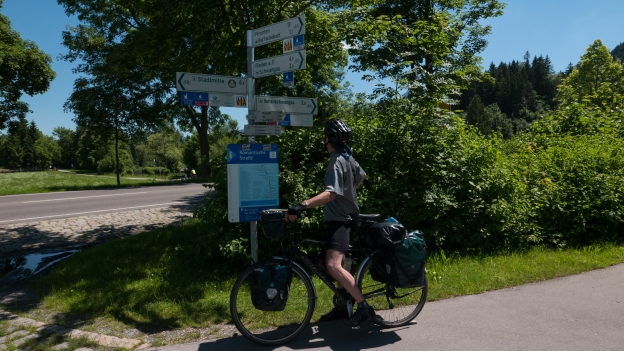 The Via Claudia Augusta is unusual in that there are 6 shuttle bus services provided to support the route. Two of these are in the Austrian section:

If you are travelling on a full-loaded touring bike or say with a child trailer, my advice would be to seriously consider taking the Fernpass shuttle. The route over the pass is signed as a mountain bike route, the road is fairly nasty and there are stretches where bikes are banned (I’m not to sure about exactly where - I think bikes are banned from the tunnels). I saw people doing it on trekking-type bikes but whether they did it thinking ‘I should have got the shuttle’ I don’t know.

Bikes are also banned from the road to the Reschenpass, however there is a pretty good road altern­ative via Martina in Switzerland. Take the shuttle if you feel like it, but if you’d rather carry on under your own steam then there’s no reason not to. The VCA shuttle from Pfunds also means missing out on the Finstermünz {internal link} which for me was one of the highlights. You can however have the best of both worlds and see the Finstermünz and then take the public bus from Martina which is equipped to carry bikes. 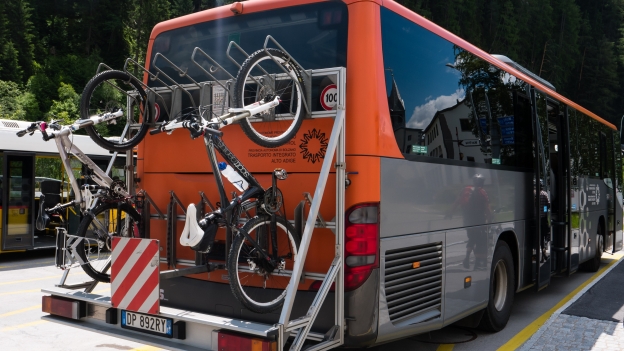 The SAD bus from Martina to Nauders and Mals in Italy

The official start of the route is a short ride from Donauwörth station. There seem to be frequent trains from München Hauptbahnnhof station, and trains from there to/from the airport.

Via Claudia in Germany and Austria: A4 maps

Via Claudia in Germany and Austria: A5 maps

There’s plenty of choice of accom­mod­ation options along the route. See the individual sections of this guide for more information.

In Germany there are hostels in Donauwörth, Augsburg and Füssen. I could only find one in the Austrian section of the route.

There are plenty of campsites on the Austrian section of the route, but relat­ively few on the German section.

The route has its own dedicated website viaclaudia.org (de/it/en)with inform­ation about accom­mod­ation and points of interest along the route as well as shuttle services to take you to the top of the major passes.

There are also many local sites — see the individual sections of the guide for more information.

Information about the shuttles

It’s perfectly possible to ride the Via Claudia independ­ently: the route is well signposted, and online services such as Booking.com make it really easy to book accom­mod­ation en route, but there are tour operators. These offer the option of a guided tour which means that you travel with a group, and ‘self-guided’ which mean that they organise your accom­mod­ation, transport your bags and provide backup in emergencies. The operators I know of are: 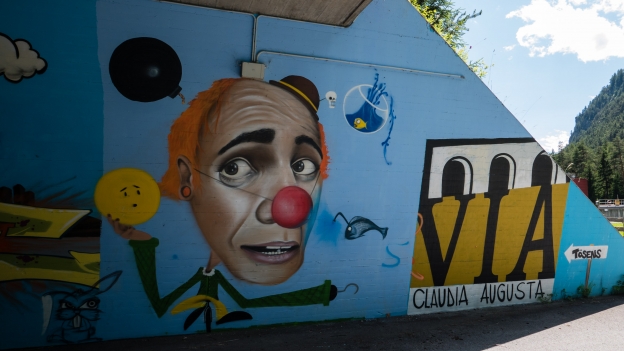