The Via Francigena is the tradi­tional pilgrimage route that runs from Canterbury in south-east England to Rome. The route was taken by Sigeric the Serious walked to Rome to meet the Pope in 990 following his appointment as Archbishop of Canterbury. Sigeric’s travel journal is the first record of the route.

The nearest equivalent to the Via Francigena is another great pilgrimage route, the Camino Frances to Santiago di Compostela. If you are looking for a great cycling exper­ience and if you are travelling light and staying in pilgrims’ hostels, then this could be a great choice. On the other hand, if you are simply looking for a convenient route to Rome then the Via Francigena routes may not be the best choice.

The Via Francigena and eurovelo 5

Duomo di Fidenza. Frieze showing pilgrims on the Via Francigena. Picture by ‘Clop’ via Wikimedia Commons

According to the viafrancigena.bike website, 30 per cent of the Italian part of the route is on unsur­faced roads or tracks. It’s also fairly challenging.

The Via Francigena and eurovelo 5 in Italy

There are three variants of the route:

Variants of the via Francigena and eurovelo 5 in Italy. Click on the lines for more inform­ation and links.   |  Show map in overlay    |    Show map in new window

The ev5/Ciclovia Francigena meets up with the Bike Francigena route at Pavia on the Po and then pretty much together they head for Piacenza and Fidenza before following the valley of the river Taro and crossing over the Apennines at the Passo della Cisa (1039m).

The Moncenisio variant on the other hand swings south of Torino and crosses the Apennines with the highest point at the Passo la Colla - or you can do what I did, and branch off at Scofera (654m). It then continues through Liguria towards La Spezia and meets up with the main route at the mouth of the Magra river and near where the now-abandoned city of Luni. Abandoned due to the combined effects of malaria and pirate raids, Luni was once an important centre and an oblig­atory stopping point for Sigeric.

The two routes part company for a short stretch with the Via Francigena Bike heading inland while the ev5/ciclovia Francigena follows the coast. They join up again at Pietrasanta before heading for Lucca.

From Lucca onwards the two routes more or less coincide and stick fairly closely to the historic Via Francigena. They take in San Gimignano, Monteriggioni, and Siena before heading for the Val d’Orcia and Radicofani an important landmark on the route and gateway to the final section through Lazio. 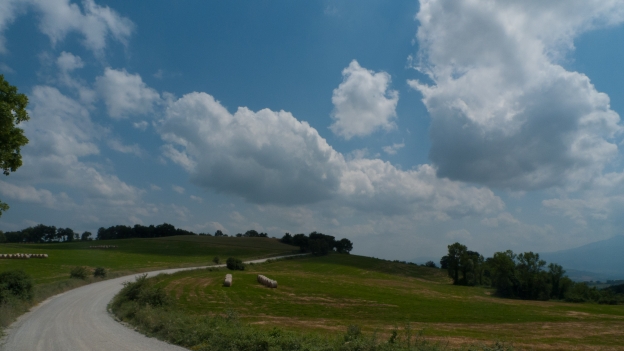 A section of the Ciclovia Francigena near San Quirico d’Orcia

Unfortunately the Ciclovia Francigena has only been mapped as far as Acquapendente, so from here on the main option is the Via Francigena Bike. This takes you from the Lago di Bolsena to Viterbo and Sutri and from there to the Lago di Bracciano practically at the gates of Rome.

Note that from Lucca onwards the route mainly follows strade bianche - unsur­faced roads. This is an enjoyable option, but also the most challenging and roundabout.

The link with the Swiss National Route 3

The link between Chiasso and Pavia for the ev5/Ciclovia Francigena hasn’t been mapped. There are a couple of routes on the Lombardia in Bicicletta site which take you to Milano and from there you can pick up the Naviglio Pavese to Milano.

If you don’t want to cycle across Milano my advice would be to turn off the N3 and go through Ascona, and then either continue along the shore of the Lago Maggiore (attention there’s a tunnel that’s off-limits to bikes) to Cannobio or Verbania, or take a detour through the Vigezzo and to Malesco (see: Into the Valley of the Painters … and Chimney Sweeps) and then drop down to Cannobio. I would then cross the lake to take the quieter road down the eastern shore of the lake (if you have the time it’s defin­itely worth making the short detour to the iconic Eremo di Santa Caterina). At Sesto Calende at the southern tip of the lake, you can then pick up the Ticino cycleway (Naviglio Grande) to Pavia.

Map and altitude profile for the Via Francigena

In Italy, the Via Francigena hiking route is well signposted, and in places I have seen cycling signs, but it will be important to know when you can follow the signs and when you can’t. I would defin­itely recommend carrying a gps with detailed OSM mapping is - the excellent viafrancigena.bike website has gps tracks and also gives you the option to download maps for printing or viewing on a tablet. 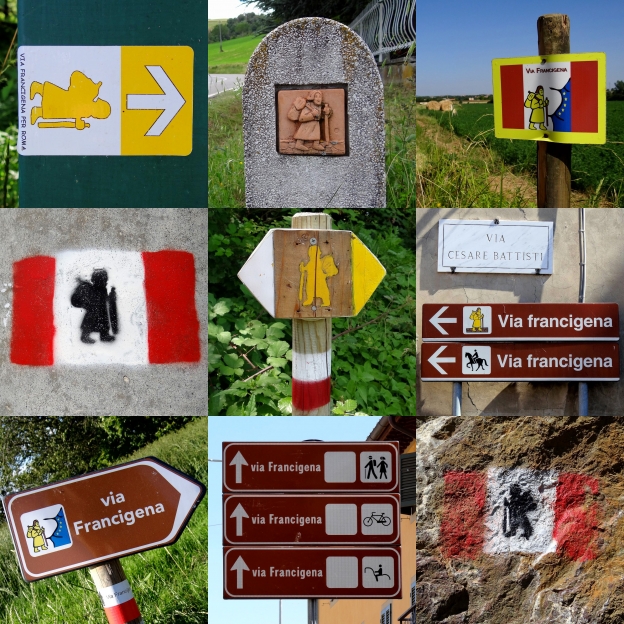 Montage of signs on the Via Francigena. Pictures by Bjørn Christian Tørrissen source: Wikimedia Commons

If you want maps for printing or viewing on a tablet, then your best choice is the excellent viafrancigena.bike. It also has gps tracks to download. 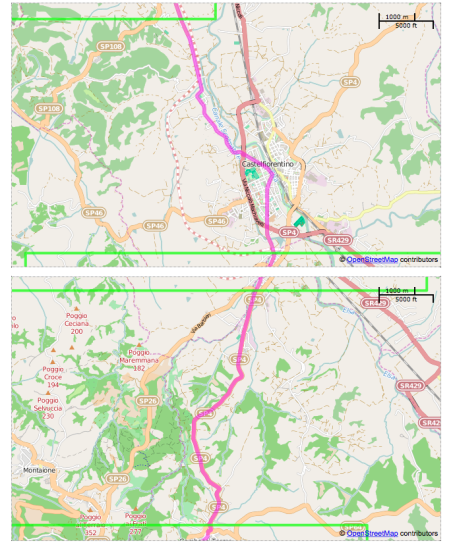 Sample of the mapping from the via Francigena Bike website. this screenshot show the medium detail maps. Click to enlarge or go to the site and download full version.

If you want maps and tracks for the Swiss Nord-Süd route (National Route 3) then head over to veloland.ch

GPS files for the Moncenisio variant

The creden­ziale is the document you carry with you and get stamped at tourist offices, bars, hostels, etc along the way. It’s a very useful document in that some accom­mod­ation is only open to pilgrims, and others offer special rates, and of course, it grows into a unique souvenir of your journey.

When you get St Peter’s you can also get a testi­monium - provided you have at least travelled from Lucca to Rome. For more inform­ation on how to get one see pilgrimstorome.org.uk: Testimonium.

Credentials are also available by post, or on the route - (list of places where you can get a creden­ziale).You can order a creden­ziale online from sloways.shop: Pilgrim’s Passport.

Websites for the whole eurovelo 5 or Via Francigena

If you’re planning to follow the eurovelo 5 then eurovelo.com may be your best starting point it has a section on the eurovelo 5 that has links to resources for individual country sections:

Websites for the Via Francigena and eurovelo 5 in Italy

viafrancigena.bike (it/en) is by far and away the best resource for cyclists wanting to follow the Via Francigena - there’s a guide to each section with maps and gps files.

For Ciclovia Francigena, the Italian section of the eurovelo 5, there’s the bicitalia.org website (it) which offers inform­ation, and gps files for part of the route. There’s also inform­ation about the Moncenisio variant.

There are a number of excellent websites from Italian local and regional tourist inform­ation bodies: 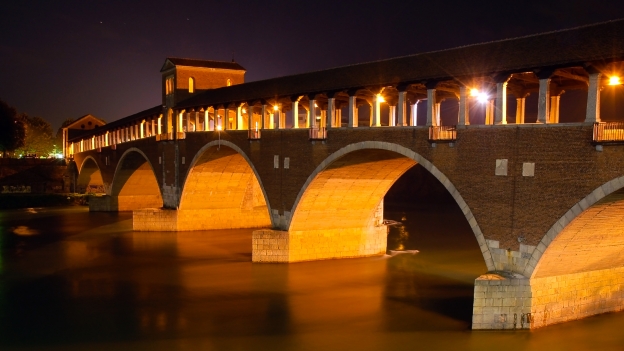 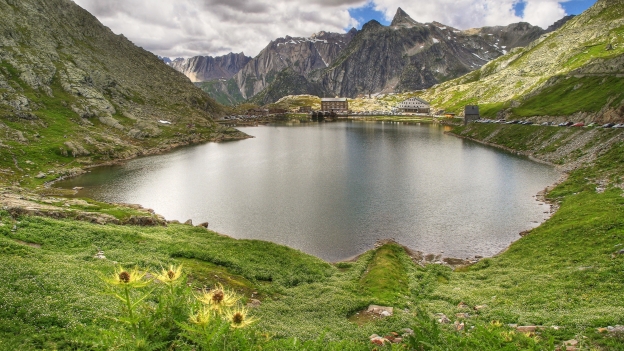 Other accom­mod­ation direct­ories and lists:

sloways.eu: cycling sloways.eu is the tour operator arm of the movimentolento self-guided packages with accom­mod­ation in *** hotels and B&B with breakfast, luggage trans­port­ation from hotel to hotel, maps and detailed description of the itinerary, travel insurance and phone assistance in case of emergency. Bike hire and transfers available as extras. 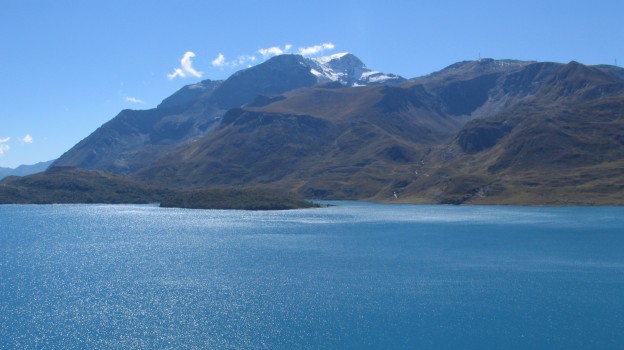