The town is famous for its bridge and for, you guessed it, grappa. The bridge was designed by the architect Andrea Palladio and is built in wood. The wooden construction and the striking design were intended to help the bridge withstand the force of the Brenta in flood. The present bridge is actually the third bridge built to Palladio’s design on the site. The bridge was rebuilt again in 1947 and is now commonly known as the Ponte degli Alpini. The Alpini are the military regiments recruited from the mountain areas. The bridge was blown up during the war and the Alpini raised the money to rebuild it. It had, and still has, a huge symbolic importance as the gateway to the Monte Grappa, the scene of historic battles during World War I.

Monte Grappa and the Ragazzi del ’99

Bassano is indelibly associated with the First World War. If you go up into the main part of the town there’s a statue of the General Gaetano Giardino looking out towards the massiccio of Monte Grappa. After the defeat at Caporetto in 1917 the Italian Army (and allied forces) fell back to the Piave river and Monte Grappa became a keystone of the frontline.

Both Italy and the Austrian-Hungarian empire suffered huge losses in the war of attrition on the Italian front. In the last desperate throw of the dice the Italian government called up the class of ’99 - the young men who turned 18 in 1917. Hastily trained, the ragazzi del ’99 (the boys of ’99) were thrown into the line in the autumn of 1917. The line held against the Austro-Hungarian attacks. Both sides then endured a terrible, bitterly cold, winter at almost 2000 metres.

The Austrian losses on Monte Grappa and the Piave were probably the final blow that led an exhausted Austria to seek to end the war, which in turn led to the Armistice.

The 1500-metre climb of the Monte Grappa regularly features in the Giro d’Italia. At the top there’s a huge sacrario militare with the remains of almost 23,000 soldiers from both sides (10,295 Austro-Hungarian and 12,615 Italian). The vast majority were never identified.

As you come into Bassano del Grappa you pass the Villa Ca’ Erizzo Luca. During the First World War this was a base for the American Red Cross, and the young John dos Passos was stationed here. Ernest Hemingway also served as a Red Cross ambulance driver initially a little way away at Schio, but after a few weeks, bored with inactivity, asked to be trans­ferred, and moved to Fossalta del Piave a few miles away from Bassano.

On July 8 1918 Hemingway was out on his rounds deliv­ering chocolate and cigar­ettes to soldiers in the trenches when the dugout he was in took a direct hit. Despite being seriously wounded himself, he managed to assist the more seriously wounded Italian soldiers and was awarded a Medaglia d’Argento al Valor Militare (silver medal for military valour).

The wounded Hemingway was taken to Milano where he spent 6 months in hospital. Coming out of hospital he came back to the area and to the Villa Ca’Erizzo.

Hemingway used his exper­ience of being wounded and hospit­al­isation, not to mention falling in love with one of the nurses, to form the basis for A Farewell to Arms. The book includes an evocative account of the Italian defeat at Caporetto - Hemingway wasn’t there but the recre­ation is so authentic that it feels like a first-hand account. He is also deeply critical of the brutal treatment of the Italian soldiers by their own high command. The book wasn’t published in Italy until 1948.

There’s a Museum in the Villa (the Museo Grande Guerra). The museum has a particular focus on the role of America on the Italian front including the American Red Cross and Italian-American pilots who flew with the Italian army (amongst them was a your Fiorello La Guardia who went on to become mayor of New York in the early 30s).

Resistance in the Second World War

This area was also the scene of bitter conflicts during the Second World War, especially as the front moved north­wards. The area was an active centre for the resistance and the city as a whole was awarded the Medaglia d’Oro for its role in the war. The resistance in turn met with reprisals and repression in particular in September 1944, there was the rastrel­la­mento (round-up) against the partisans in the area which led to 500 dead and 400 deported to concen­tration camps. The rastrel­la­mento culminated in the hanging of 31 young men from trees on what is now the Viale dei Martiri an esplanade planted with ornamental trees with a view out over Monte Grappa.

The ornamental trees have been replanted, but in many ways the esplanade is as it was that day. The dead are commem­orated with small plaques - most showing their photo­graphs, while others have the word ‘Ignoto’ (unknown)- many partisans fought under noms de guerre to avoid possible reprisals against their families. 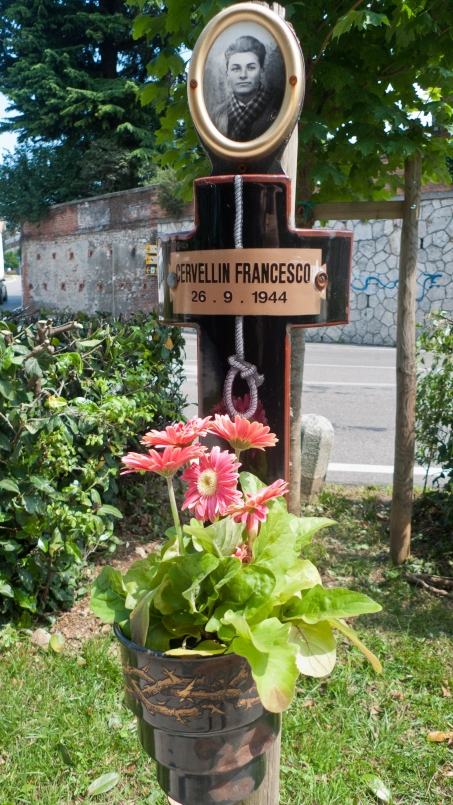 The city and the surrounding area were awarded a medaglia d’pro (gold medal). According to the citation:

Between the Brenta and the Piave, during the 20 months of Nazi occupation, its volun­teers fought and epic struggle against the enemy invader. The noble city and the territory of the Grappa sacri­ficed 171 young people on the gallows and and 603 before the firing squads. It bore the martyrdom of 804 deportees [ie sent to the concen­tration camps] and of 3212 prisoners, as well as the destruction of 285 houses. Bloodied by such inhuman ferocity, but unbowed, its people took up arms alongside the partisans and in the glorious days of the 25 to 29 April 1945 stopped the enemy forces on the Brenta forcing them to surrender.

The Ponte degli Alpini and the Grapperia Nardini

At the entrance to the bridge on the left bank is the Grapperia Nardini. Nardini are Italy’s leading brand of grappa and this is where the firm started. Production has moved to a distillery outside town, but the original grapperia is an atmospheric place to stop for a drink. There’s a photogallery on the firm’s website, and a video from italia.it (Italian only):

The walls overlooking the river still bear the scars for the grapeshot from the cannons of Austrian forces in 1809.

Among the grapperia’s famous visitors is the British Queen Mother. Passing by an official visit, she had her escort stop so that she could pop in for a drink ( picture of the Queen Mum outside the grapperia looking perky).

So far as I know, there are no hostels on the route - although there is one in Trento.

There is a campsite (the Camping Santa Felicita at Borso del Grappa a short-ish bike ride from Bassano del Grappa. There are a couple of campsites on the Lago di Corlo near Feltre (the Camping Gajole and the Camping al Lago ).

Map of bike-rental points on the Ciclabile della Valsugana. Click image to enlarge. For more inform­ation go to valsuganarentbike.com