The roads you choose can make all the difference to your exper­ience on tour. (‘Well duh’ I hear a lot of people saying). Italy has the highest rate of car ownership in Europe, combine that with mountainous terrain, and some roads can get very busy — but at the same time, there are others that stay bliss­fully quiet. So how do you pick the good ones and avoid the bad ones?

Picking the good roads and avoiding the bad ones

Avoiding the bad ones

The Italian road classi­fic­ation system has:

For the touring cyclist the strade provin­ciale and strade communale are usually the best bet. Although bear in mind that a strada provin­ciale between two towns is still likely to be busy with local traffic.

The strade statali can be the busiest roads, but they can be very quiet and scenic, especially in mountainous or remote areas,. There are also some strade statali where a new faster road (a super­strada or strada scorrevole) has been built alongside it, leaving the old road still with the same classi­fic­ation. (Strade regionali by the way are basically strada statali where respons­ib­ility for maintenance has been trans­ferred to the regional government).

The Touring Club Italiano and Michelin helpfully mark the major strade statale in red (OpenStreetMap and Garmin City Navigator also distin­guish these roads although they don’t use red). This isn’t an infal­lible guide — the SS1 for example, has stretches where it’s a motorway and stretches where you’ll see more bikes than cars — but as a guide to which roads to avoid it’s better than nothing.

When it comes to spotting the roads to avoid, there are two really important signals

If your proposed route includes this type of road my advice would be to be very wary — avoid them if you can. In some cases these roads are classified as Strade Extra-Urbane Principali — these are really autostrade by another name and bikes are banned from them. The fact that a road is a dual carriageway doesn’t neces­sarily mean that bikes are banned from that road, but it is a warning sign (there’s more inform­ation about these further on).

Note: Google Maps does not distin­guish between the different types of strada statale (although it does show E numbers) — unless you zoom in pretty close, and most people don’t. If you are planning your tour using Google Maps then I would strongly advise checking your route against another map.

If you’re in doubt, you can get a good idea of what a road is like by checking it out on Google Streetview. The coverage is close to 100 percent —although in some areas the imagery may be several years old. If you are worried about whether a road is off-limits to bikes you can use Streetview to check whether there are ‘no-bikes’ signs on the access roads.

The viamichelin.com website is a very useful resource for route planning as it enables you to enjoy most of the advantages of a tradi­tional map without having to buy maps.

Here’s a screenshot from the viamichelin site showing part of the Lago Maggiore and the roads around it. I’ve arrowed: 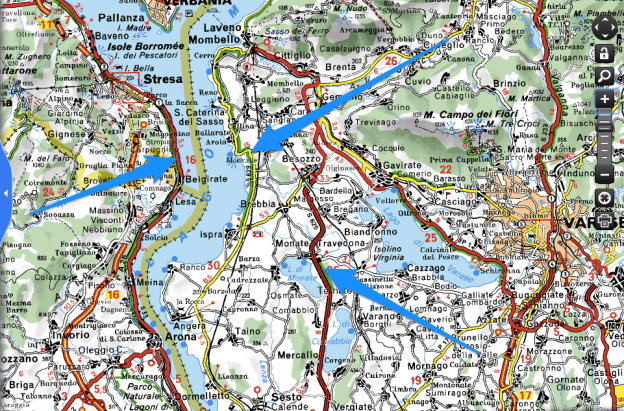 Screenshot from viamichelin.co.uk showing roads around the Lago Maggiore

Here’s a screenshot for the same area from Google Maps (in fairness I should say that if you zoom in far enough, the Google Map will show you that the SS629 is a dual carriageway): 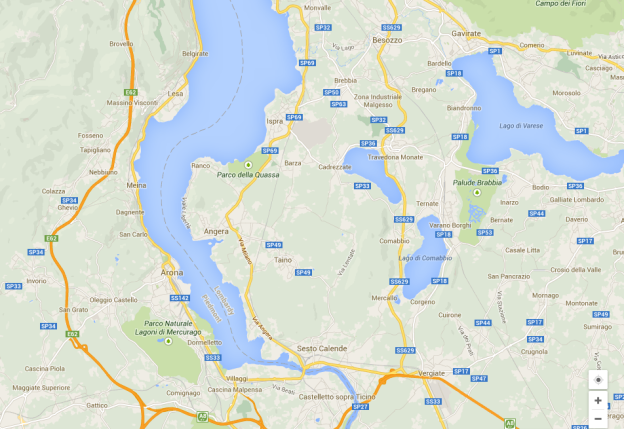 Roads where you can’t ride (even if you wanted to)

The dual carriage ways (divided highways) are strade statali that have been upgraded to super­strade. The names can vary (eg strada scorrevole, strada grande comunicazione, strada extraurbane principale and strada grande viabilita’), but often these are basically autostrade but with the crucial difference that motorists don’t have to pay to use them and bikes are banned. 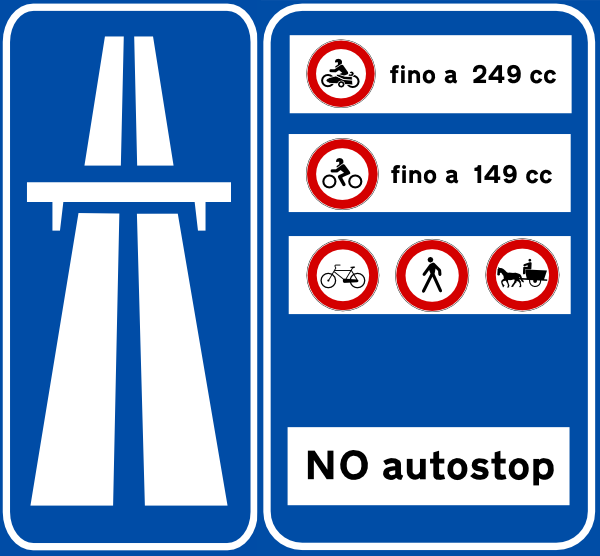 Example of a sign at the entrance to a superstrada

Even when bikes are allowed, as well as the obvious problems of heavy lorries, these roads may go via long tunnels or high viaducts, and on some stretches you may find yourself riding for several kilometres until you get to the next exit  — fine if that’s what you are expecting.

Update: here’s a map of roads, other than autostrade, where bikes are banned. Please note: there are almost certainly others (if you find one that I’ve missed please drop me a line).

Note: the red lines show non-motorway roads that are off-limits to bikes; autostrade are shown in orange on the Google map.

Some other roads to avoid

There are also other roads where bikes aren’t banned but you’d want to avoid them. I couldn’t possibly list all of them, but here are a few: 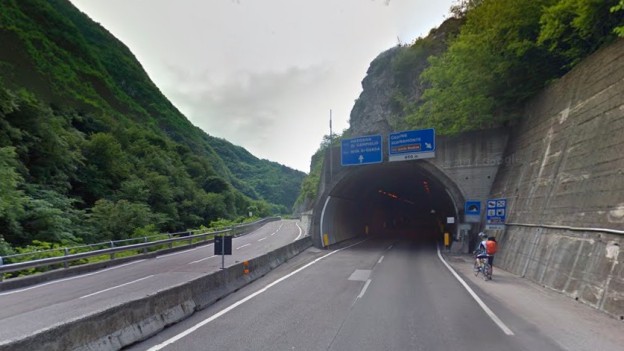 Cyclist has a ‘who-put-that-tunnel-there?’ moment. Photo from Google Streetview

If you are planning your own route, partic­u­larly through the more mountainous parts of Italy, then you’ll want to think about tunnels and how to avoid them

Here’s a map of tunnels on non-motorway roads in Italy. Again, I can’t guarantee that this is complete, and I’ve tended to ignore tunnels that are less than 100 metres long. If you find one that I’ve missed please drop me a line).

Zoom in on the area you are inter­ested in. Click on the tunnel icon for more inform­ation on the length of the tunnel and altern­atives (if there are any).

Tunnels generally aren’t off-limits to bikes, but there are a growing number of tunnels where they are banned (these should be indicated in the inform­ation about the tunnel).

Personally I avoid them where I can. Make sure your map shows tunnels —and avoid them when you can. If a road in a mountainous area is very straight: be suspi­cious. (Note: Google and OpenStreetMap maps show tunnels, but only if you zoom in quite close —it’s always worth checking your route in detail, but this is where cross-checking against a tradi­tional map is worth the extra time).

In some cases you can avoid the tunnel by looking for the old road around the mountain. My exper­ience in the Dolomites was that very often the road was still there —still serving as an emergency escape route. There are excep­tions of course where the old road has been blocked or swept away as a result of a landslide —which may be the reason the tunnel was built in the first place. If you’re in luck, a local cyclist may come along.

Tunnels may also be built as bypasses around towns and villages —so again, ask yourself where the old road would have gone.