The Eroica is an annual cycling event - mixture of a race and a cycling festival - that takes place in early October starting and finishing in the village of Gaiole-in-Chianti. To take part in the race you need to ride a vintage bike. The race’s other unique feature is that the course includes long sections of unsur­faced ‘strade bianche’ - ‘white roads’. The strade blanche are literally white and are a charac­ter­istic feature of the landscape of this part of Toscana. The race was actually started in the 1990s with the aim of helping to preserve them. (Scroll down for a map showing road surfaces). If you can’t come for the event itself, the 205-kilometre route (the ‘percorso permanente’) is signposted and you can cycle it at your leisure.

In addition to the 205-kilometre option parti­cipants in the race have the choice of a 38-kilometre, 75-kilometre 139-kilometre and 205-kilometre courses. Lots of people opt for the more relaxed options, so it isn’t just for the heroic. Many parti­cipants also get into the spirit of the event by dressing in retro clothes and there are ‘retro refreshment’ stops along the way.

Brooks, who are one of the sponsors of the event, have posted a couple of videos that will give you a flavour of what to expect:

If you’re inter­ested in taking part in the race you can find more inform­ation on the official website eroica.cc: Gaiole. In 2013 the race had about 5,000 parti­cipants. You have to pre-register to take part in the lottery for places. The lottery for men under – 60 takes place in March, while the lottery for women, men over 60 and certain other categories, takes place in June. In 2013 the regis­tration fee for lottery winners was 35€. A limited number of places were also available at a higher price (with the extra money going to charity).

More about the rules

The rules about bikes (quoted from the website) are:

“Bici eroiche are all road racing bikes built up to and including 1987 both with or without gears, such as those built in the late 19th and early 20th centuries. These bicycles most likely have a steel frame, but other types of rare frames are also permitted, such as the aluminium frames built by Alan and Vitus with screwed or glued joints and the Exxon Graftek frames of the late 1970s with carbon tubes glued to aluminium lugs. Regarding components, bicycles should adhere to the following general guidelines:

Obviously, early 20th century bicycles with single gear or flip-flop rear hubs don’t need to comply with the above criteria as long as they have their original components.”

The rules in full are published on eroica.cc: L’Eroica Gaiole Regulations. The site also has lots of inform­ation about the regis­tration process and require­ments. Probably the most important requirement that you need to be aware of is that due to a change in the law in 2015, you now need to submit a medical certificate. 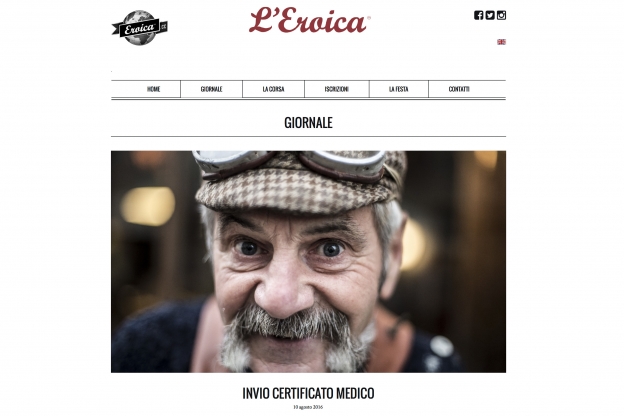 Eroica website (eroicaga.cc) with a reminder about the need to send a medical certificate

There are a number of companies offering holidays that include parti­cip­ation in the Eroica itself. However, prices are jaw-dropping: 3000 euros for 8 or 9 nights, based on a shared room. OK, a lot of people come to take part in the race but even so you should be able to arrange your own accom­mod­ation for a lot less than that. The tour-operator packages might be worth consid­ering if you are really desperate to take part and really want to guarantee yourself a place.

You can ride the 205-kilometre signposted route, or sections of it, at any time and on any type of bike. While the official route starts at Gaiole-in-Chianti, you can easily pick it up at any point - and as the route passes close to Siena you might find the city a convenient jumping-off point. There’s nothing to stop you doing it in either direction but the signposts only point one way.

There are a number of towns and villages either on the route or close to it, so finding food and water shouldn’t be a problem.

You can buy a roadbook and you can collect stamps from authorised hotels, restaurants and bars along the way, and, provided you get 6 stamps (and cough up 7 euros) you can get a person­alised certi­ficate that you completed the ride. For more inform­ation and a list of parti­cip­ating organ­isa­tions to eroica.cc: permanent route 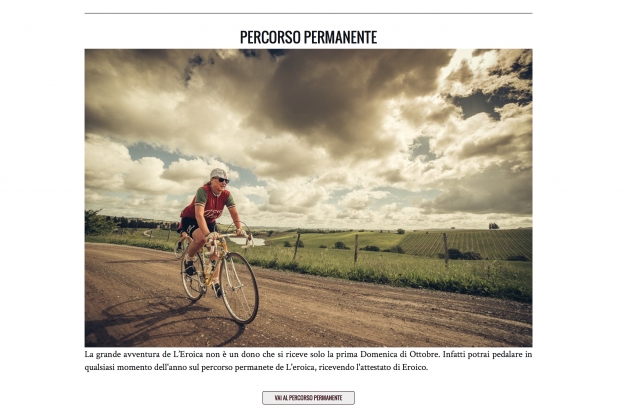 Eroica website (eroica.cc) - page about the signposted percorso permanente (the site is also available in English)

If you are planning on camping there are several campsites within striking distance of the course - although none are very close:

Siena is probably the best bet if you are arriving by train.

According to eroicaga.cc: permanent route a luggage transport service is available at weekends between April and November. The cost is:

There’s nice article by Mat Brett on road.cc with lots and lots of photos to give you a sense of the atmosphere, and another on totalwomenscycling.com focusing on women taking part in the event, and proving that no, you don’t need a big bushy moustache.