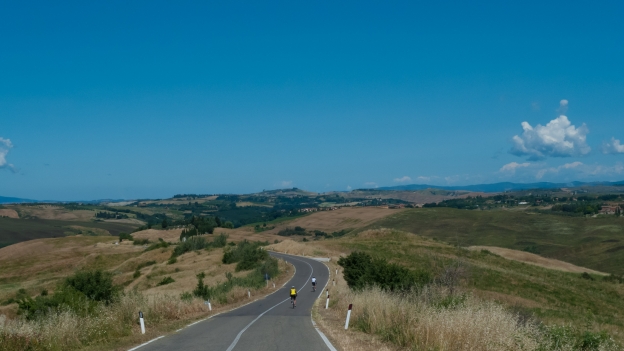 Cyclists on the road between Volterra and Siena

This route takes you through through the heart of Toscana: the Chianti, the Crete Senesi, and the Val d’Orcia. Great cycling between some of Italy’s great art cities. It links the UNESCO world-heritage listed cities of Firenze, Siena, San Gimignano, and Pienza, as well as the Val d’Orcia. It also takes you to Volterra another of the great Tuscan cities. There are lots of other places to see and visit in Toscana, these would probably figure on most people’s must-see list.

The route takes you to Radicofani on the border with the Lazio region, and almost to the gates of Rome, but a great altern­ative would be to see the other side of Toscana by linking this tour with either the Gran Tour della Maremma the Grand Tour della Val di Merse. Two excellent signposted routes through the south and west of the region, bliss­fully quiet roads and even more beautiful Tuscan hilltop towns and scenery.

There’s an option to take the direct route going from Firenze to Siena and then to Pienza. However, to my mind it would be a real shame to miss out on San Gimignano and Volterra - not just because the cities themselves are well worth seeing but also because there’s some lovely riding between them.

This tour is more suitable for exper­i­enced cyclists: I opted for the scenic roads, but inevitably during the summer they draw other tourists, so some of the roads used are relat­ively busy, although the traffic seemed to be mainly tourist traffic and there were very few lorries. It’s also inevitably pretty hilly: travelling through inland Toscana I counted on 1000 metres of climbing for every 50 kms I travelled. The reward for that climbing are big skies, views for miles and huge open spaces. 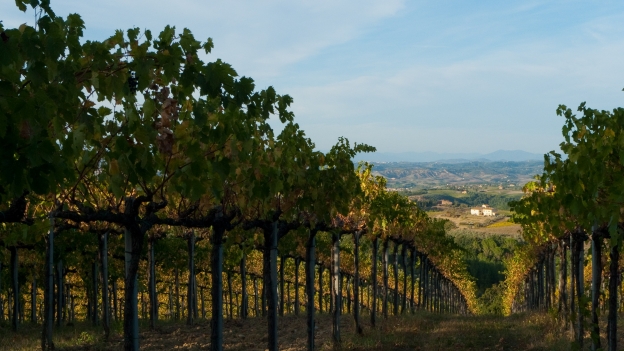 Bear in mind that in mid-Summer Toscana is hot, with temper­atures well into the 30s in the hottest part of the day. Add into that the fact that the main tourist cities will be very busy crowded and it really isn’t the best time to be there. If you have the choice, go in late-Spring and early-Summer or early-Autumn.

The Chianti area is, of course, famous for the wine. Helped, perhaps, by the most memorable piece of product placement in movie history (16 second video - plays in overlay). The original Chianti was the area around Radda, Gaiole and Castellina who together formed an alliance for mutual defence. The league evolved and became increas­ingly occupied with the regulating wine-growing in the area - the role that it continues to play today. The cockerel was the symbol for the alliance.

The Chianti wine-growing denom­in­ation has expanded to take in most of central Toscana. However, only wine from the central area has the right to use the term Chianti Classico and use the black cockerel symbol.

For three centuries this area was the cockpit for the fierce rivalry, and almost continuous warfare, between Firenze and Siena - and in turn a theatre for conflict between factions within the Italian peninsula and France and Spain. 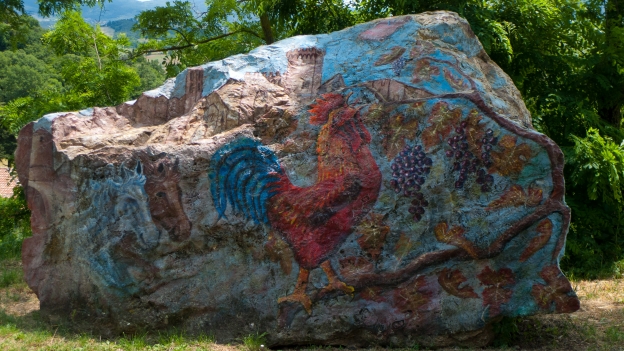 The Crete Senesi is the name for the area to the south of Siena. While north of Siena wine is king, in the Crete the main crop is wheat and other cereals and the impression of the landscape is one of rolling hills punctuated by hilltop farmhouses often approached by a strada bianca lined with cypress trees. The Crete get their name from the local dialect word for clay. If you visit the area in late summer of autumn when the fields have been ploughed you’ll see the pale sandy brown of the crete. At times the landscape is austere but at the same time it has a certain grandeur.

The Val d’Orcia has been listed by UNESCO The Val d’Orcia is the area between Siena and Monte Amiata on the border with Lazio. The area has been given UNESCO world heritage status. According to the UNESCO website:

“The landscape of Val d’Orcia is part of the agricul­tural hinterland of Siena, redrawn and developed when it was integ­rated in the territory of the city-state in the 14th and 15th centuries to reflect an idealized model of good governance and to create an aesthet­ically pleasing picture. The landscape’s distinctive aesthetics, flat chalk plains out of which rise almost conical hills with fortified settle­ments on top, inspired many artists. Their images have come to exemplify the beauty of well-managed Renaissance agricul­tural landscapes.”

Coming to Firenze from the north the best option is probably the Ciclopista del Sole (eurovelo 7) which links Firenze with Bologna and leads north to the border with Austria.

After this tour you could continue on to Rome. But, never mind the old saying, there are other options: you could head west into Umbria, or you could link this tour with the Gran Tour della Maremma or the Grand Tour della Val di Merse (or both of them) giving you the oppor­tunity to really get to know this region.

There’s a good choice of accom­mod­ation along the way, and a good selection of campsites and hostels if you are on a budget, although as you get into the more sparsely populated south of the region, things can get a bit more tricky. However, there are lots of resources to help you find somewhere to stay.

terresiena.it (it/en) is an excellent site for travelling cyclists (although I’m not sure whether it has been updated recently). It includes an useful accom­mod­ation search facility. This lists the 141 places that have signed up to the tourist author­ity’s hospit­ality for cyclists scheme.

There’s an even more compre­hensive searchable directory on terresiena.it (it/en) the main tourism website for the area. There’s a list of tourist inform­ation offices. look out for the brochure downloads for the individual areas within the provincia (equivalent to a county).

There are three campsites in, or near, Firenze:

The Camping in Town Firenze is the most centrally-located with some beautiful views of Firenze and close to the Piazza Buonarotti from with a grand­stand view over the city. It can be a bit noisy on the side nearest the road. The Panoramico offers views over the city that truly justify the name, but at the end of a long day, you may not relish the climb of the hill from central Firenze. the Internazionale is a fair way out from the city near the motorway. If you did opt to stay here your best bet might be to head for Impruneta and then pick up the Via Chiantigiana further on.

You can get flights to Firenze airport, but Pisa airport is the regions leading airport. It’s a shortish train journey from Firenze.