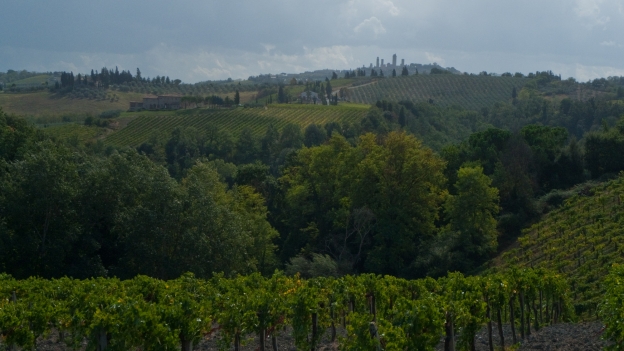 First sight of the towers San Gimignano in the clouds

A classic ride through the Chianti wine country (this is the area where Chianti Classico is produced) following the Via Chiantigiana (SR222) before turning off towards San Gimignano - a medieval Manhattan. San Gimignano is famous for its towers - like medieval Manhattan (if Manhattan had been built on a hill). Your first sight of the towers of San Gimignano on the horizon will be a memorable moment. The town is on UNESCO’s list of World Heritage sites (UNESCO’s reasons). At the height of its glory, the city must have been a truly amazing site: the 14 towers that we see today are only a fraction of the original 72.

There’s quite a lot of climbing but the views defin­itely repay the effort. The best time to go is early autumn as the leaves in the vineyards are changing colour from green to gold, orange and red. If you’re in a hurry you could continue along the Via Chiantigiana direct to Siena.

The first challenge is getting out of Firenze and over the A2 autostrada. The route suggested here is the way I went, which involves a bit of a detour via Bagno a Ripoli and from there following the Strada Comunale Ritortoli as it starts to climb into the hills. There are other more direct options, but like most of the routes I’ve taken into and out of Firenze they involve narrow roads between high walls and no pavement - which personally I find a bit unnerving.

The aim is to pick up the Via Chiantigiana on the outskirts of Firenze near Ponte a Ema, just before it goes under the motorway. From here you continue through Grassina which is really still a suburb of Firenze, before starting to climb into the hills on towards Strada-in-Chianti and then on to Greve-in-Chianti. 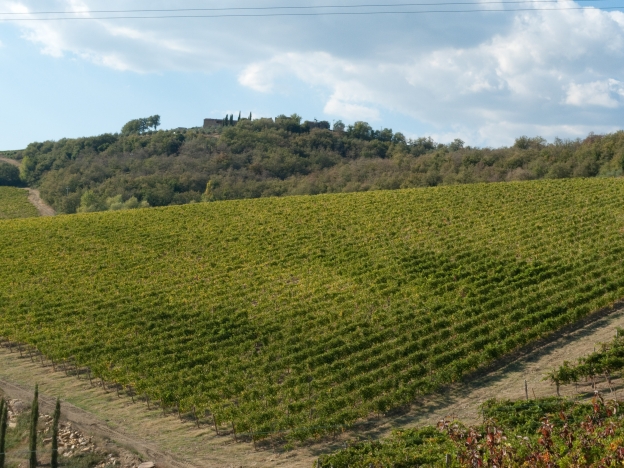 In the Chianti countryside

Greve-in-Chianti: home of two of the great navigators

You’ll see the Castello da Verrazzano a few kilometres before reaching Greve. The castello (castle) was the birth­place of Giovanni da Verrazzano, the explorer who discovered the Hudson Bay and who was born just to the north of Greve (see verrazzano.org for more about his. There’s a statue of the explorer in the main Piazza Matteotti. The piazza, with a portico on three sides with artisan shops, workshops and restaurants is worth the detour. Look out for the Antica Macelleria Falorni a butcher’s shop that’s been on the piazza since 1729.

From Greve you could go in search of another great Italian navigator Amerigo Vespucci who is thought to have been born in nearby Montefioralle, a fortified village a couple of kilometres and a bit of a climb away. The Vespucci family home is in the main street - the house is identified by a V and a wasp (vespa is the Italian word for wasp). 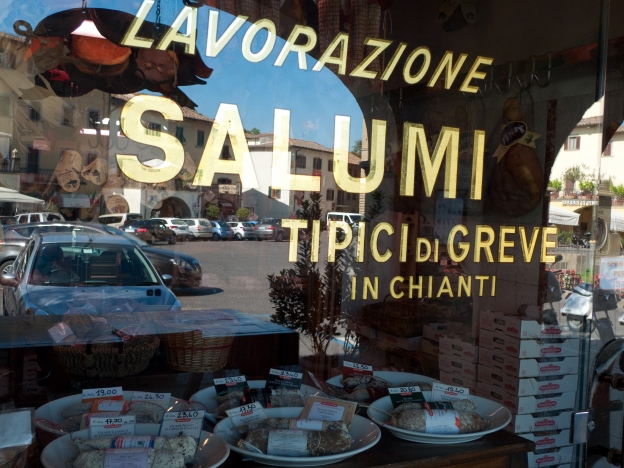 Panzano in Chianti and ‘the world’s most famous butcher’

The next village along is Panzano in Chianti. Panzano is home to celerity butcher Dario Cecchini who runs another antica macel­leria. He has been described by the International Herald Tribune as the world’s most famous butcher (although of course you have to wonder how many other famous butchers there are in the world). The village is a bit of a mecca for foodies - or at least a meat-eating foodies. There’s a good article and interview on independent.co.uk and other articles on girlinflorence.com, and divingandtravelling.com.

I have to admit that I passed through Panzano (twice) without knowing anything about him, and initially, I was a bit sceptical, but watching this video, I started to be won over. Dario Cecchini ‘Carne e Spirito’

The video is a 26-minute talk he gave in Copenhagen. His argument is basically that if we are to eat meat we should value it and make use of every part of the animal: as he explains, growing up as the child of a butcher he lived on the cuts no one else wanted to buy. The talk is in Italian but with trans­lation (by his American wife). It’s not for the squeamish though. It ends with him declaiming a stanza or two of Dante and a Shakespeare-related pun.

If you’re curious you can also read Heat: An Amateur’s Adventures as Kitchen Slave, Line Cook, Pasta-maker and Apprentice to a Butcher in Tuscany by Bill Buford and enjoyable account of his time with Cecchini in Panzano. It is also offers some inter­esting insights into the area.

You could pay 200€ to be a Macellaio per un giorno - butcher for the day.

Cecchini has three restaurants in the town, with the cheapest, is Dario Doc which offers the Mac Dario, burger menu at 10€. Just to prove that the to beef or not to beef line was not a flash in the pan there’s a Super Dario menu at 15€). (Open lunch­times only Mon-Sat). Just in case you’re wondering, they also do a veget­arian menu. The other restaurants in the village are Solociccia and Officina della Bistecca.

After Panzano comes the Conca d’Oro - the bowl of gold. The name comes from the fact that this was once a wheat-growing area. Now, it is dominated by vineyards. The route goes down into the bowl and at the ridge over the Fiume Pesa (river Pesa), you have the choice of turning off and heading towards San Gimignano, or starting the climb towards Castellina-in-Chianti.

If you are heading for San Gimignano you need to turn off the Via Chiantigiana, just after it crosses the Fiume Pesa (river Pesa) - about 40 kilometres out of Firenze. If you are planning to continue to Siena you stay on the road for the route description read the next part of the series The Heart of Toscana: Firenze - Siena direct.

After Barberino there’s a long cruisey descent down towards Certaldo in the valley. Again the road will take you past the centro storico if you let it - you can see the old part of town on a small rise. The route then crosses the main Via Cassia which, at this point, is pretty horrible - it seems to be a cut-through for lorries. Fortunately, you only have to get across it.

After crossing the road the route climbs on very quiet roads through vineyards and olive groves towards San Gimignano. San Gimignano is surrounded by vineyards: unusually for Toscana, the leading wine is a white wine: Vernaccia di San Gimignano. Look out for the city on the skyline. The first sight of it should be an unfor­get­table moment.

If you don’t do anything else in San Gimignano, climb the Torre Grossa (‘Big Tower’) (opening times and prices) and the nearby Piazza della Cisterna.

If your day’s cycling is behind you, you could end your sight­seeing by enjoying a glass of Vernaccia, and the view, from the terrace of the Museo del Vino Vernaccia (Vernaccia Wine Museum). They do wine-tastings as well. For a short article (in English) about the museum see winetrailtraveler.com

There’s a hostel/guest house near to Certaldo: the Fattoria Basseto, they offer private rooms as well a dorm beds. There’s no hostel in San Gimignano itself.

There’s an excellent campsite just outside San Gimignano (the Boschetto di Piemme). A bungalow at the site might also be a good option if you are looking for budget accom­mod­ation. There’s a bus service to the town (although you could also walk it pretty easily) - so you can visit without having to worry about your stuff.

There’s also a good campsite (the Semifonte) at Barberino Val d’Elsa, if you want to break your journey there. There’s another good site nearby, the Camping Panorama Chianti.

The nearest train station to San Gimignano is at Poggibonsi, with services to Siena and to Empoli

The main tourism website for the area is the terresiena.it site (it/en) which has a section dedicated to the Chianti. For general tourist inform­ation about San Gimignano, including accom­mod­ation listings there’s sangimignano.com (it/en).

Check bandierearancioni.it (en) for inform­ation about what there is to see in Certaldo and Barberino Val d’Elsa. Both towns have been awarded a Bandiera Arancione by the Touring Club Italiano. The flags are awarded to small inland towns that have “an historical, cultural and envir­on­mental heritage of merit and are distin­guished for an offering of excel­lence, but also for offering tourists a quality welcome”. 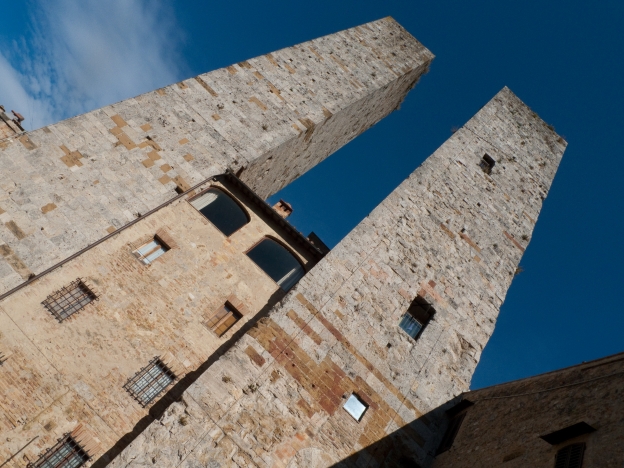