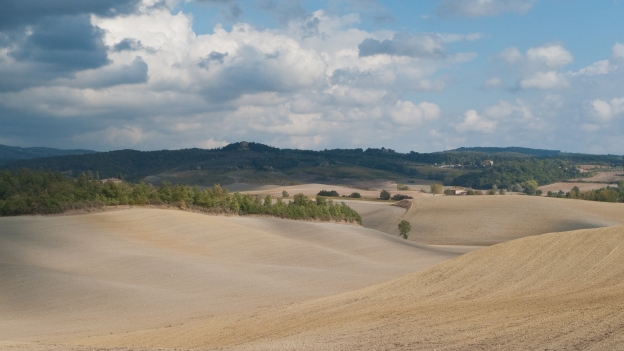 Countryside between Volterra and Siena

While the larger Tuscan cities like Siena and Volterra are deservedly big attrac­tions, it would be a big mistake to ignore the smaller towns and villages. This section of the tour takes you to Casole d’Elsa and Monteriggioni - both have been awarded Bandiera Arancione (orange flag) status by the Touring Club Italiano.

Another fairly short section - but as is often the case in Italy, the key statistic is the amount of climbing.

Coming out of the city you take the street that takes you past the hulking great fortress built by the Medici, which today is used as prison (Casa di Reclusione). It’s best known as home to the renowned theatre company Compagnia della Fortezza (it).

As you come out of the gates on your left-hand side there’s a plaque commem­or­ating the liber­ation of the city in 1944 with a photo of the GIs coming up the street towards the gate.

There’s then a descent past some glorious scenery, followed by a 9-kilometre stretch on the main road between Siena and Cecina this is relat­ively busy - but the road is reasonably wide and the views from the road are excep­tional. You then turn off onto a much quieter, in fact practically deserted, road to Casole d’Elsa (402m) 11 kms further on at the 25-kilometre point.

Casole is a great place to stop for a break, but if you do nothing else, park your bike and climb to the top of the belvedere(viewpoint) for an excep­tional view over southern Toscana. Casole also has its own palio which takes place on the second Sunday in July, for more inform­ation see ecomuseovaldelsa.org - Palio di Casole d‘Elsa.

The next stop is the walled city of Monteriggioni at the 45-kilometre point, a tiny village with an almost perfectly-preserved set of medieval walls. You walk along the walls and enjoy the views (opening times and prices). 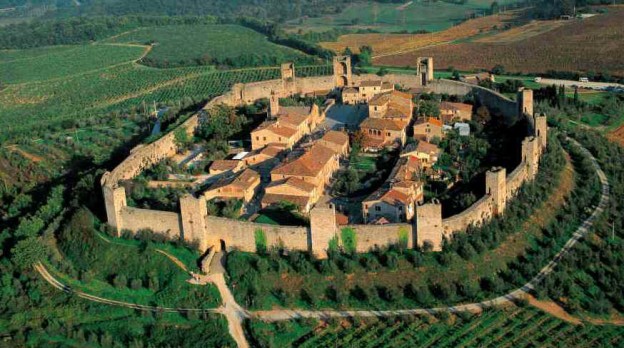 Dante Alighieri used the towers of Monteriggioni to evoke the sight of the ring of giants encircling the Infernal abyss.

“As with circling round
Of turrets, Monteriggioni crowns his walls;
E’en thus the shore, encom­passing the abyss,
Was turreted with giants, half their length
Uprearing, horrible, whom Jove from heaven
Yet threatens, when his muttering thunder rolls. ”

When I visited Monteriggioni the first thing that struck me, after the view of the city walls, was the size of the nearby car park: in the peak tourist season it clearly attracts a lot of visitors.

From Monteriggioni there are 8 kilometres alone the Via Cassia to the Siena ring road. In complete contrast to the section at Certaldo, this is relat­ively quiet and scenic.

From the ring road the route follows the Ciclovia Francigena (until recently called the Ciclovia dei Pellegrini) (eurovelo 5) into the centre of Siena. Note that if you are planning to stay at the campsite it’s probably best to turn off before the centre.

The central piazza that hosts the annual Palio horse race. The piazza is big but you wonder how you could stage a horse race there. and why anyone in their right mind would want to be a jockey in the race.

With the Torre del Mangia, Siena’s major landmark and visible for miles around. One of the civic towers that was built in the middle ages by the comuni as expres­sions of civic pride and asser­tions of independence from Pope and Emperor. Siena’s at 88 metres is almost but not quite the tallest in Italy (it’s beaten by Bologna and Cremona). It’s called the Torre del Mangia after its first guardian Giovanni di Balduccio, who was nicknamed Mangiacquadagnior simply ‘Mangia’ because of his reputation as a spend­thrift - literally trans­lated the name means ‘eats earnings’.

You can climb the tower. (opening hours and ticket prices).

While you’re there, visit the Museo Civico. There’s lots of great art in Siena but if you don’t see anything else go here. Highlights include Sala del Mappamondo (Hall of the World Map), where you can admire Simone Martini’s Maestà (Virgin Mary in Majesty) (image opens in overlay). Picture from Wikimedia Commons (Google Art Project). On the other side of the room is another work attributed to Martini, a fresco of Guidoriccio da Fogliano, a captain of the Sienese army.

In the next room are the frescoes Allegories of Good and Bad Government by Ambrogio Lorenzetti. At the end of the room the central fresco shows Justice, Wisdom, Virtue and Peace on the walls on either side are contrasting scenes depicting (you’re probably ahead of me here) the results of good and bad government. The good depicts a sunlit, idyllic, serene city, with joyous citizens and a countryside filled with crops and a contadino (countryman) coming to town to sell his pig; the bad city is filled with vices, crime and disease. Sadly, the fresco of the results of bad government is in fairly poor condition. 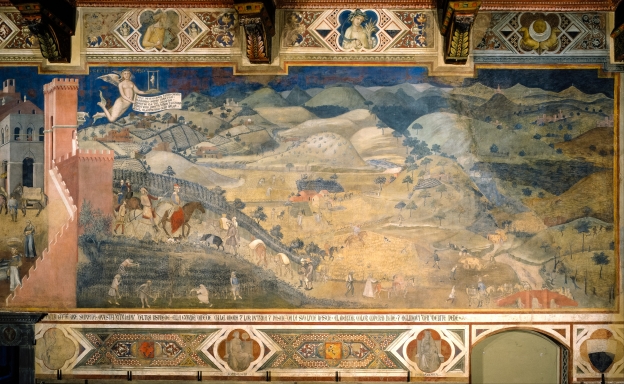 Siena’s other must-see is the Duomo. For me the exuberant gothic façade is one of Toscana’s greatest sights. It’s certainly one of the greatest things you can see for free. But it’s worth stumping up for the admission to go inside. There’s the cupola by Bernini, statues by Donatello and Bernini, the excep­tional mosaic floor, and the Libreria Piccolomini (Piccolomini library). The library frescoes, are by Pinturricchio - one of his assistants was the young Raphael (Raffaelo Sanzio). They celebrate the life of the young Enea Silvio Piccolomini who worked as a diplomat before going on to become Pope Pius II. Piccolomini was also responsible for the rebuilding of Pienza - his home town and birth­place as an ideal Renaissance city.

From Siena you could head for Sovicille and the Grand Tour della Val di Merse. You could do this as a circuit and resume this tour as it heads for the Val d’Orcia, or you could link with the Gran Tour della Maremma which will take you all the way to the coast and back. These areas may not be as well known as the area between Siena and Firenze, but it has every bit as much to offer.

You could also do all or part of the Eroica signposted route which follows a 205-kilometre figure of eight to the south and east of the city. 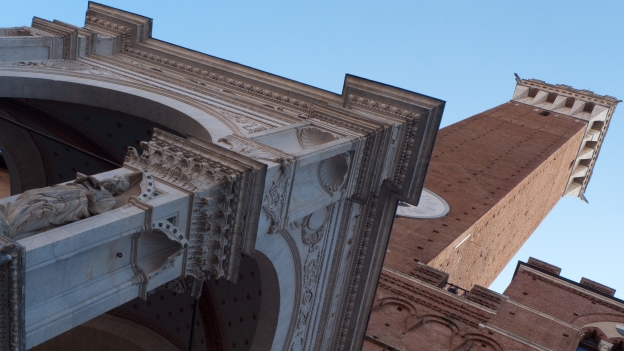 In addition to the campsite and hostel in Siena, there’s a hostel in Strove on the Via Francigena. There’s more inform­ation and pictures here (monteriggioniturismo.it - Sosta di Strove. Note that the hostel gives priority (and reduced prices) to pilgrims with a credential.

At Siena there’s the very good Camping Siena Colleverde a little way out of town.

There’s also another campsite near Monteriggioni, the improbably-named, Camping Luxor. This is on the other side of the motorway but accessed from the Via Cassia between Monteriggioni and Siena. Keep an eye out for the sign the turning is easy to miss.

There are train stations at the Saline di Volterra down the hill from the main town, and in Siena.

bandierearancioni.it for more about Casole d’Elsa and Monteriggioni. There’s a section devoted to Siena on the terresiena.it 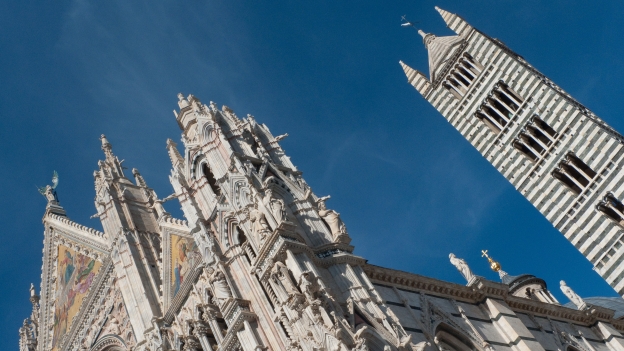