On the Via Lauretana between Pienza and Siena

This section of the route heads from Siena to Pienza. Through the memorable landscapes of the Crete Senese and the Val d’Orcia. The Crete Senese is the name for the area to the south of Siena. While north of Siena wine is king, in the Crete the main crop is wheat and other cereals and the impression of the landscape is one of rolling hills punctuated by hilltop farmhouses often approached by a strada bianca lined with cypress trees. The Crete get their name from the local dialect word for clay. If you visit the area in late summer of autumn when the fields have been ploughed you’ll see the pale sandy brown of the crete. At times the landscape is austere but at the same time it has a certain grandeur. 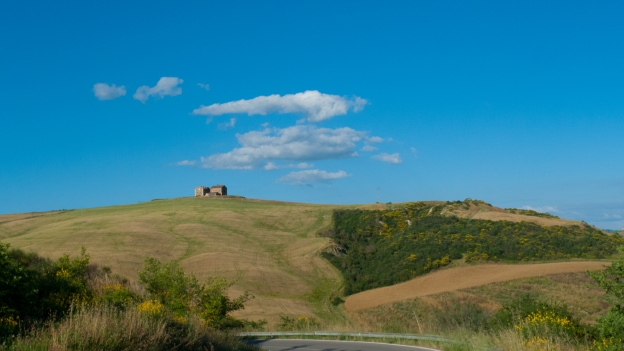 On the Via Lauretana between Pienza and Siena

As with the ride from Firenze, the main challenge is to find a way over the major roads that pass to the west and south of the city.

If you are leaving from Siena itself you need to head for the Porta Romana with its splendid crenel­lated double gateway left over from the old medieval walls. (If you are staying at the campsite then you may want to pick up the route a little later - see the gpx file in the download pack).

You then continue on towards for Le Ropole and then Arbia. From here the Via Lauretana (SP438) climbs out to the town of Asciano (177m) 27 kms from Siena. Asciano is your last chance for something to eat or drink.

This really is a great area for cycling and pretty much any road will give you a great ride. Which makes it a tough task to just picking one. Your choice may spend on where you are heading for.My suggested route takes heads for Pienza via Chiusure, Montisi and Castelmuzio. If you prefer, you have the option of heading from Trequanda on the road towards Montepulciano. 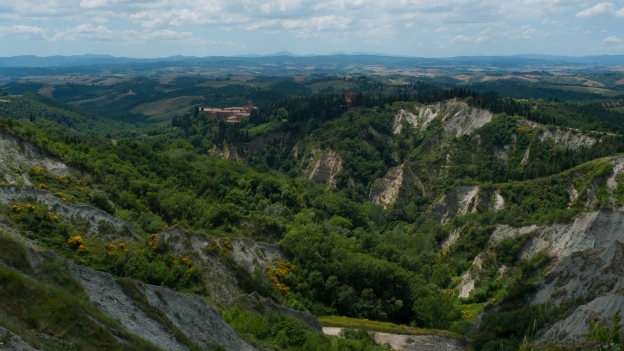 One the major place of interest in the area is the Abbazia di Monte Oliveto Maggiore (it/en). This is a couple of kilometres off the route near Chiusure. The abbey is most famous for the Chiostro Grande (great cloister) with a cycle of frescoes depicting the life of Saint Benedict. The frescoes were begun by Luca Signorelli who did 9 frescoes on the west side and completed by Il Sodoma who painted a further 28. 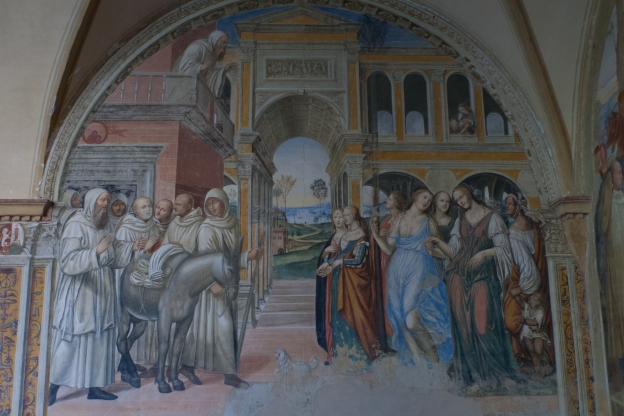 The frescoes also include a self-portrait of Il Sodoma - who is pictured with a couple of pet badgers (image opens in overlay), completely upstaging the official subject of the fresco: Saint Benedict’s first miracle.

At San Giovanni d’Asso there’s the Bosco della Ragnaia a woodland park and garden created by the American artist Sheppard Craige. this was something I didn’t know about when I passed through the area, but it seems like it might be an inter­esting stop. From the website:

“Under tall oaks one may find many inscrip­tions that gather moss while waiting to be noticed by a visitor. Some will be familiar, others enigmatic, while yet others merely express Sheppard’s sense of whimsy. Notable built features include: an Altar to Scepticism, the Center of the Universe, and an Oracle of Yourself. The Bosco does not offer a meaning, but is, on the contrary, open to all inter­pret­a­tions. ”

Pienza was built by Pope Pius who decided that he was going to completely rebuild and remodel his home town as a model renais­sance city - and rename it in his own honour. It’s a lovely place to walk around. The main attraction is the Palazzo Piccolomini where the family lived until the 1960s when the the last count died without a successor, his son having died in the war. The loggia has a superb view towards Monte Amiata. The only problem is that there’s a rather tedious guided visit where you go round, stop, listen to the audio guide then continue to the next stop and listen to the next bit - and so on. 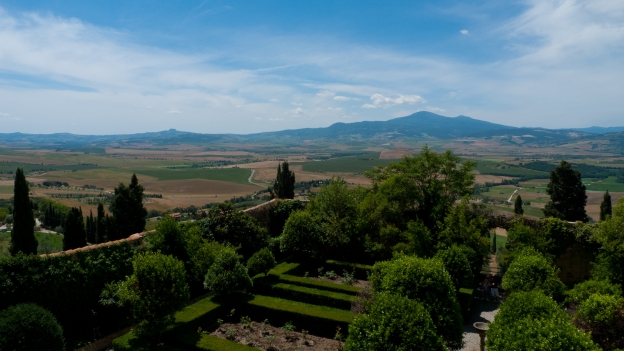 Rather than heading for Pienza you could head towards Montepulciano and Chiusi where you can pick up the Ciclopista del Sole (eurovelo 7).

After the Abbazia di Monte Oliveto you could continue down the hill to Buonconvento and then head for Pienza, via Montalcino and San Quirico - a longer, but more scenic route than taking the main Via Cassia. You could even detour to another abbey the Abbazia di Sant Antimo (en.wikipedia.org).

The Ciclovia Francigena (until recently called the Ciclovia dei Pellegrini) passes through San Quirico, before heading for Radicofani. 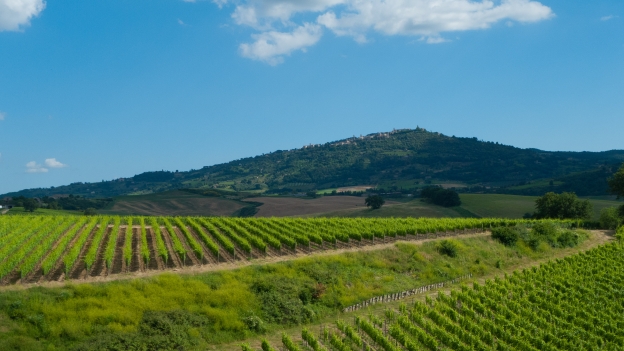 The Val d’Orcia near Montalcino

In Castelmuzio there’s the Locanda Casalmustia.

Camping is a little trickier, but there are sites:

I stayed at the Podere Il Casale. There are superb views from the Podere towards the Monte Amiata. The owner of the agrit­urismo is a Swiss cheese­maker —as in a cheese­maker who happens to be Swiss, rather than someone who makes Swiss cheese (although he may also make Swiss cheese). There are also a couple of peacocks who act like they own the place. 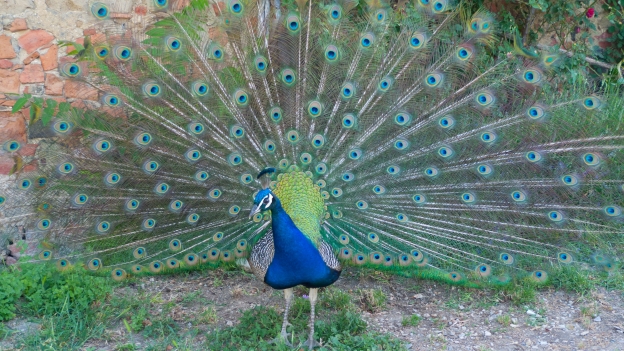 Peacock from the Podere Il Casale

There are train stations at Asciano and San Giovanni d’Asso, although your best bet may be to head for Chiusi on the main line between Rome and Firenze.

For general tourism inform­ation the terresiena.it has sections dedicated to the Crete Senesi and the Val d’Orcia.

The Ufficio Turistico has a website with an accom­mod­ation listing. 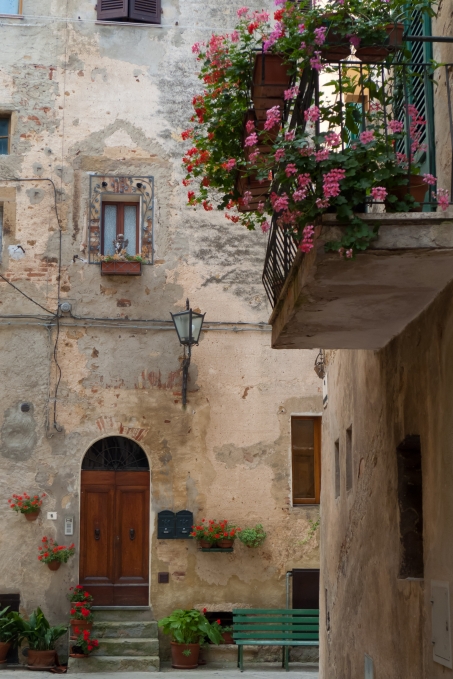