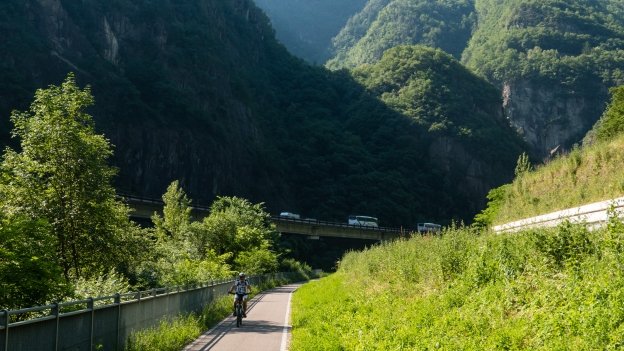 Easy. The route is almost all downhill.

The cycleway connects with the Etschradroute (part of the Via Claudia Augusta) a little way south of Bozen (Bolzano).

This route is also known as the Eisacktal Radweg. It forms part of the Ciclopista del Sole ( eurovelo 7). 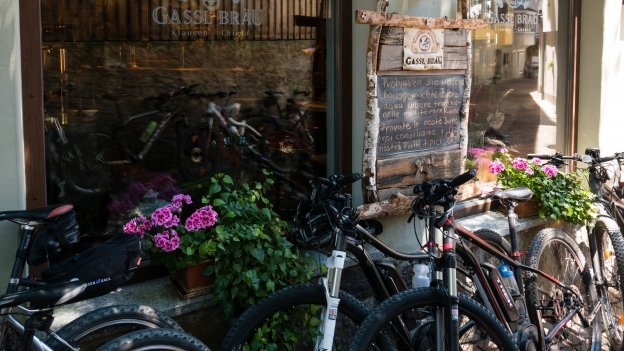 Bikes parked outside a restaurant in Klausen (Chiusa) 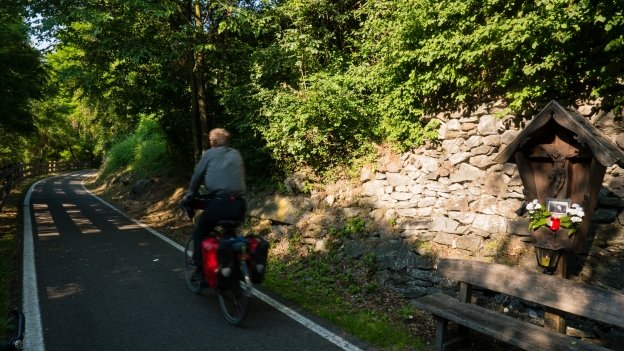 Cyclist on the Brennerradroute near Klausen (Chiusa)

The cycleway follows the river out through the outskirts of Brixen, and continues to Klausen (Chiusa) 13 kilometres further on.

The next section of cycleway is quite magical: riding accom­panied by birdsong, and the sound of the river, with trees on both sides, it feels like you’re in the middle of the country. The railway line, the autobahn, and the main road are within a very short distance, and occasionally you can hear the sound of passing traffic.

In the footsteps of Albrecht Dürer

The cycleway follows the route once taken by Albrecht Dürer when he visited Italy. Along the way there’s an inform­ation panel showing a water­colour that Dürer painted showing the views from this stretch — except that the water­colour was a bit of a composite: further on there’s another inform­ation panel which notes the spot where he added a couple of mountaintops that weren’t visible from the original position

The cycleway brings you into Kollman. Look out for the Schloss Freiburg painted in a pink and cream chequer­board decor­ation. (It’s now a pension). There’s also a picnic area and playground here.

Coming out of the village, the cycleway runs beside the SS12 before it descends to a bridge over the river and continues on the other side. This stretch of the cycleway follows another section of the original railway line to Brenner, made redundant with the opening of a new tunnel in 2007. 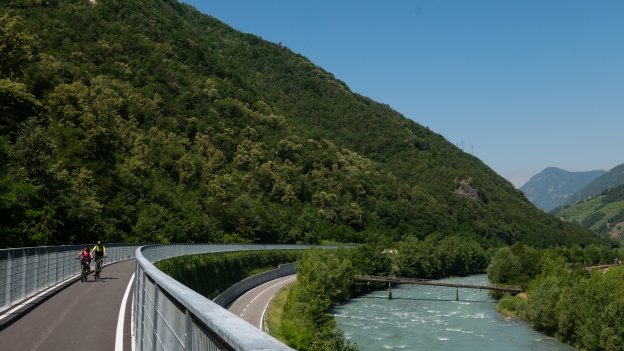 A little further on, you cross over an old railway bridge, the Röthele Brücke (Ponte Röthele), that takes you back over the river. You then continue on the right bank of the Eisack, with the SS12 on your right and the autobahn on the other side of the river. Look out for the fabulous old wooden bridge on your left-hand side. A little further on, on the left-hand side, there is a café-restaurant: the Radstation Bios.

A short (180-metre) stretch of old railway tunnel brings you out under­neath the feet of the motorway viaduct.

At Steg (Passo di Fiè) there is an attractive shady picnic area with water, and across the river, according to the sign a hundred metres away, is a gasthof.

This section on the old railway line is inter­rupted as the railway line comes out of the tunnel at Blumau (Prato all’Isarco). In compens­ation, there’s a hotel-restaurant (the Schlosshof) with a nice biergarten just on the cycleway. It resumes a little further on when the rail line goes into another tunnel. 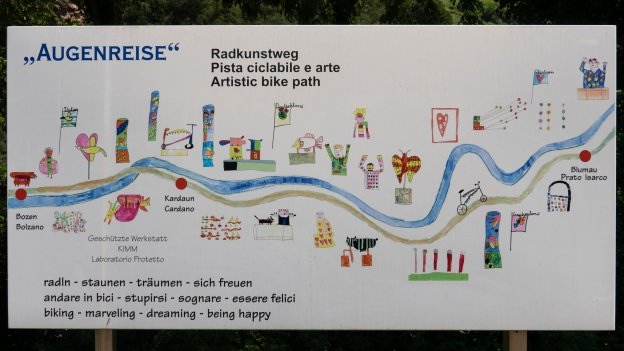 For the next 6 kilometres into (Kardaun) Cardano, there is an ‘artistic bike path’ with 12 sculp­tures along the route. radln - staunen - träumen - sich freuen (biking - marveling - dreaming - being happy) the sign says.

And on the subject of cheering things up, look out for Rudilandia, where somebody (presumably the eponymous Rudi) has taken over a scrap of wasteland between the road and cycleway and turned it into a little garden complete with a model railway. Sadly, when I pass by it was locked, and there were no trains running.

The cycleway then goes into a 500-metre long old railway tunnel.

If you look up, you can see the steep sides of the valley covered with vineyards.

Things get a lot more urban after you pass the autobahn toll gates. The cycleway threads its way under­neath the various motorway and road viaducts before coming to an underpass that takes you under the main road and into the surpris­ingly quiet and peaceful centre of the village of Kardaun (Cornedo). Look out for the mural on the sides of the Rathaus. In the little square, there’s a charming water fountain depicting St Christopher. The Bistro Rathaus (Rathauscafe) opposite is a good place to stop for a drink or something to eat. It’s very popular with locals at lunchtime.

Coming out of Kardaun there’s a surpris­ingly peaceful cycleway running between the river on the one side, and vineyards on the other. If you have a moment, take a moment to look back, and in the far distance, you should be able to see the gleaming peaks of the Dolomites. This stretch is decorated with flags that are part of the Kunst Radweg (artistic cycleway) project. The artwork shows the world as seen by the children of the village. Look out for the flag depicting Scotland which seems to show what I think is the Loch Ness monster in the rain.

A little further on the Kunst Radweg comes to an end, and there is a sign welcoming you to Bozen (Bolzano) city of the bicycle. 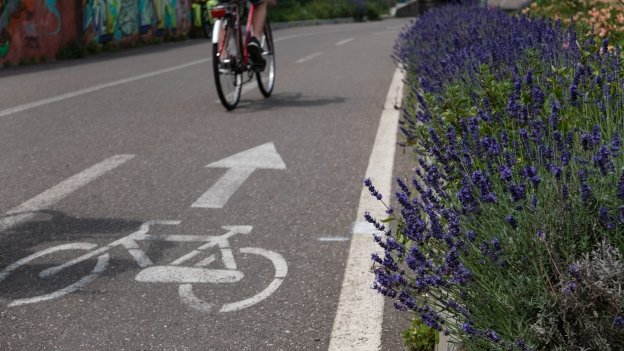 Flowers beside the cycleway on the way into Bozen (Bolzano)

Bozen: The City of the Bicycle

Bozen has one of the highest rates of cycling in Italy with over a quarter of people using bikes as their regular means of transport. The city has recently announced plans to spend almost a million euros on further improving its network of cycleways.

For more about what to see and do in Bozen see: Visiting Bozen.

The route takes you through the city centre of the city of Bozen (Bolzano) passing the Gothic Cathedral, city theatre, the University and the Museion – the city’s elegant modern contem­porary art gallery, followed by two curvy bridges, one for pedes­trians and the other for cyclists.

After the bridges, the cycle route continues through a beautiful riverside park towards its endpoint at the junction with the Etschradroute part of the Via Claudia Augusta close to the point where the Eisack river flows into the Etsch (Adige) river. 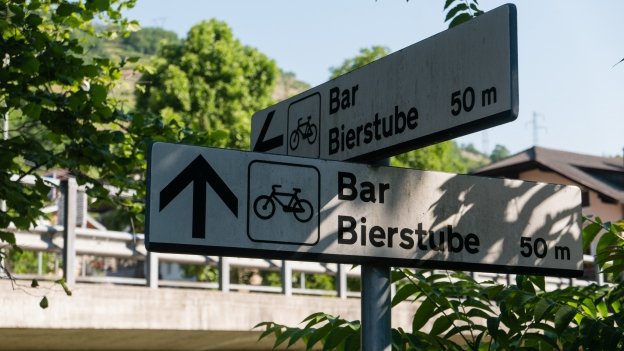 Signs on the Brennerradroute near Kollmann (Colma)

There’s a hostel in Bozen: the Jugendherberge Bozen.

There are surpris­ingly few campsites in this part of the Südtirol, and because they are close to the autobahn, they can get very busy with camper­vanners making an overnight stop on their way south. Saturday nights can be partic­u­larly busy. Fortunately, campsites also tend to have an area for tents which means that you should be able to find somewhere to sleep.

A few kilometres further south is the Hotel Camping Gamp, a small friendly family-run campsite that is combined with a hotel. The restaurant is good value, and you can get breakfast there as well. For children, there’s a small petting zoo with Shetland ponies.

At Bozen there’s the Camping Moosbauer. The campsite is located among orchards and vineyards on the outskirts of town. It has a restaurant, shop and pool. I partic­u­larly like the way that the owners are trying to offer some insight into the history and culture of the Südtirol. In particular, there’s the ‘Learning Sanitary Block’ where you can read about the area while you clean your teeth, or read about the local wines while you do the washing up.

But, please note that the area for tents is tiny, and in high season there’s a big demand, and, as they say, themselves, it can at times be ‘squeezy’. The site does seem to try to squeeze everyone in, but they also say that they cannot guarantee space. They say that you can ring them in the morning and, depending upon demand, reserve a space for that evening. If you are planning to stay for three nights or more you can reserve a pitch of your own. If you are planning only to stop for the night, and not explore Bozen, then it may be worth looking at one of the campsites further south of the city.

The Camping Steiner, a few kilometres south of Bozen, offers more space, and as it’s a short bus or bike ride from the city, it’s also a good base for sightseeing.

The line between Brixen, Brenner to the north, and Bozen to the south, is served by three train companies:

You must have a bike ticket to travel on the Trenitalia and SAD services, and sadly the tickets for one company aren’t valid on the others’ services. To travel on the Eurocity services you need to reserve a bike place (cost 10€) in advance. 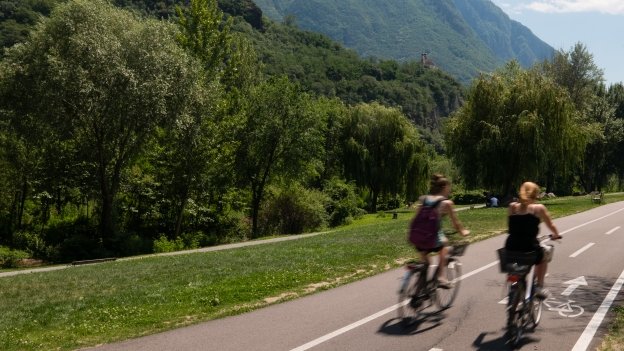 Cyclists on the Brennerradroute as it passes through Bozen (Bolzano)