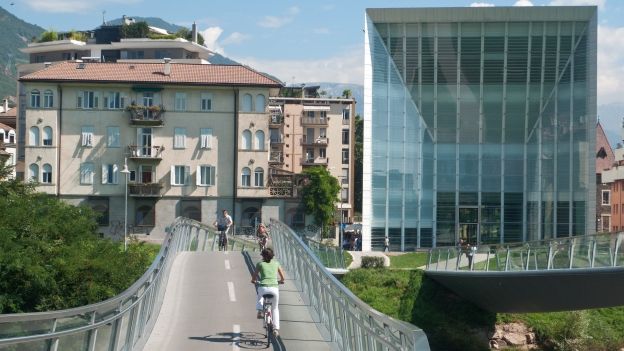 Cycleway in Bozen. In the background is the Museion

Bozen is about 100 metres in altitude below Meran - so enjoy the last bit of downhill. From Bozen to Trento it’s pretty much all flat. You could bypass the centre of Bozen (Bolzano) but again it would be a pity to miss out on it. The city has one of the best networks of cycleways of any city in Italy and it’s defin­itely worth taking the time to wander around. (download a pdf map of the city’s cyclepaths ).

What to see in Bozen

One of Bozen’s star attrac­tions is Ötzi the Ice Man - Ötzi’s body was found high in the glaciers near the border with Austria. It was originally thought that had been a soldier in the Great War but it turned out that he had died nearly five thousand years ago and his body had been effect­ively freeze dried.

The mysterious life and death of Ötzi the Iceman (™)

Ötzi (pronounced somewhere between ‘Urtzi’ and ‘Ertzi’) is the name that’s been given to the man who died about 5,000 years ago, whose body was found frozen in the ice high in the mountains near the border with Austria. While other skeletons have been found. Ötzi’s body, freeze-dried, is unique in its state of preser­vation. It’s also unique in that so much of his clothing and posses­sions have been preserved intact. There is something touching about seeing his clothes and posses­sions. This wasn’t a Bronze-age prince buried in state with jewellery, but an ordinary traveller.

Not surpris­ingly given the state of his body, Ötzi, has been x-rayed, scanned, his teeth and the contents of his stomach and guts analysed. We know what he had for breakfast, and for dinner the night before he died. If this all sounds a bit CSI, the story that was pieced together is a story of a crime committed a very long time ago.

By contem­porary standards he was tiny - 150cms tall and weighing 50kgs. We know he was about 45 years old - in those times, an old man, one knee badly affected by osteo-arthritis, he had a heart condition and on top of all that the researchers found worms among his faeces which would probably have been causing him acute stomach pains.

But the most dramatic discovery of all was that the was killed, shot from behind, by an arrow that ripped a hole in an artery in his shoulder.

So what was an elderly guy with a gammy leg and heart condition doing high in the mountains? The mystery deepens: Ötzi was carrying a longbow (and this bow was long - taller than the man himself) together with a sheaf of arrows in a beauti­fully-crafted sheath?. But the bow wasn’t finished and only two of the arrows have tips.

The researchers have also discovered that Ötzi had what seemed to be defence injuries to his hands suffered a day or so before he died. So was he a fugitive whose pursuers caught up with him? Of course no one knows, and for all of the CSI-comes-to-Bozen hoopla no one will ever know, but certainly that’s how I picture him, limping painfully, heart pumping, with his pursuers on his trail.

The exhib­ition, marking the twentieth anniversary of the discovery of his body, has been extended and extended and now has become permanent. As well as talking about the man, and the research, it also talks about the whole Ötzi phenomenon. Ötzi attracted worldwide interest and in the Tirol was adopted as the first Tiröler (although ironically, he belonged to a genetic group which is widespread among the Ladin-speaking minority in the region). There were also attempts, with various degrees of taste, to cash in: the prize for the most tasteless cash-in has got to go to the chocolate manufac­turer who produced chocolate bars in the shape of Ötzi’s mummified body, but the ‘does-anyone-else-think-this-is-weird-or-is-it-just-me?’ award goes to the picture of Brad Pitt displaying his Ötzi tattoo for the camera.

There’s a glorious section devoted to Ötzi and the nutters of the world: the medium who wanted to commu­nicate with Ötzi (didn’t work because Ötzi has appar­ently been reincarnated); and the woman who thought she was Ötzi reincarnated - the caption dryly notes that nothing in her dreams of her alleged previous life ‘is in accordance with the results of the research to date’. Then there’s the guy who wrote to the researchers to suggest helpfully that Ötzi had been struck by lightning because he was carrying a metal axe - Ötzi, may not have had a lot of luck, but even he wasn’t that unlucky. The numer­o­lo­gists have also got in on the act: Ötzi’s body was found on the 19 September 1991 - 1991991 - spooky huh?

And then there’s the letter (we are going back to the days before email) from Nigeria offering to provide inform­ation about Ötzi - in return for $5000.

The exhib­ition records that since 1997 ‘Ötzi’ has been a registered trademark and there’s even a video interview with the head of marketing for the Sud-tirol tourist authority talking about Ötzi as a brand (‘Ötzi’ has been trade­marked).

As well as being analysed “Ötzi the Iceman” has been recon­structed, in the perfectly under­standable effort to give him a human face, but the results seem, to me at least, just a little bit weird: poor Ötzi looks like a member of a 1970s English heavy metal band who’s look a bit the worse for wear. and although he wasn’t a hunter, and was wearing a very decent jacket, he’s shown topless and wielding a spear. 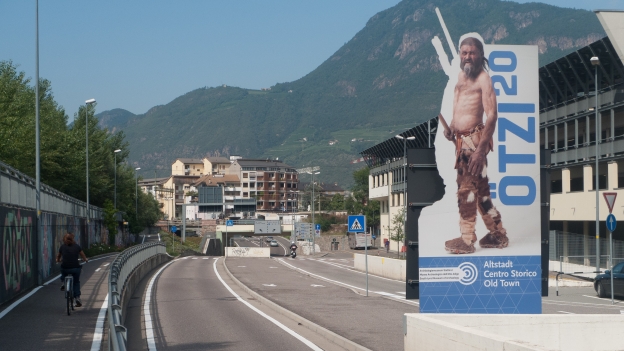 Ötzi the Iceman on one of the roads into Bozen

Bozen often figures in the list of Italy’s hottest cities. If things do get too hot you can catch one of the cable cars which will whisk you in minutes to the cooler heights above the city. The Rittner Seilbahn Funivia del Renon to OberBozen (SopraBolzano) will take you to, and, if you want, your bike, in 12 minutes to the Ritten (Altopiano di Renon) almost a thousand metres above the city. From the top of the cable car you can take the Rittner Schmalspurbahn  (Trenino di Renon). If you have hiking shoes you could also walk to the earth pyramids. Or you could visit the Plattner Bienenhof beekeeping museum.