Jump to the Map and altitude profile or the gps download. 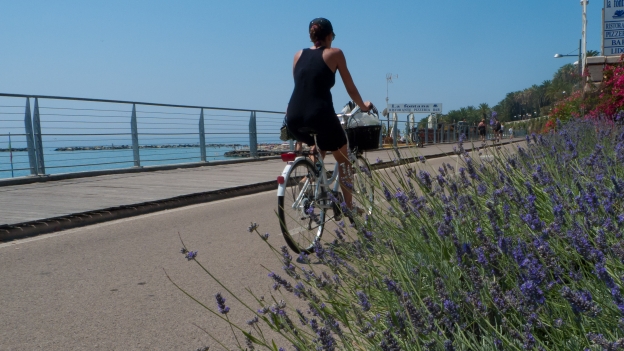 The best of Liguria’s cycleways is undoubtedly the Cycling Riviera (Parco Costiero del Ponente Ligure) cycleway which runs for 24 kilometres between San Lorenzo al Mare and Ospedelettti passing through San Remo. The cycleway is one of the very best in Italy, and probably in the whole of Europe. It follows the course of the old railway line that ran along the coast. It is entirely traffic-free. It has opened up areas of the coast that were previ­ously completely cut off by the railway line. Built to a high standard with imagin­ative planting, it is a delight and deservedly very popular.

The final four kilometres to take the cycleway into Ospedeletti were due to be completed in November 2013 with the opening ceremony scheduled for the 22 March 2014.

Look out for the Villa Nobel at Sanremo which has an entrance onto the cycleway. The villa is where Nobel spent the last years of his life. The villa is open to the public, or you could just visit the gardens.

Work has started to extend the Cycling Riviera cycleway from San Lorenzo al Mare to Imperia, a distance of seven kilometres. The extension will reuse the track bed of the rail line that used to run along the coast, which has now been replaced by a new section modern rail line in tunnels inland. The new section is planned to open in 2021, and should be every bit as scenic as the existing cycleway.

The new section of rail line continues to Andora, about 11 kilometres further on. Again the plan is that the redundant rail line will be reused as a cycleway.

The stations at the two ends of the cycleway were closed and not replaced. If you are arriving by train the best train stations are probably Sanremo and Taggia.

There are also car parks at either end of the cycleway (San Lorenzo al Mare and Ospedeletti) as well as San Remo and Arma di Taggia. The waypoints file in the gps download package includes waypoints for the stations. 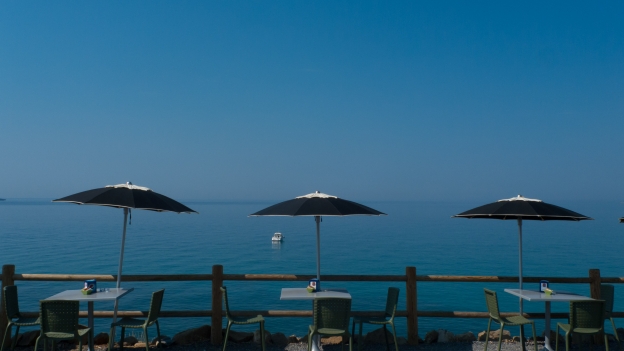 Café on the Cycling Riviera cycleway

There are a number of campsites close to the cycleway including: 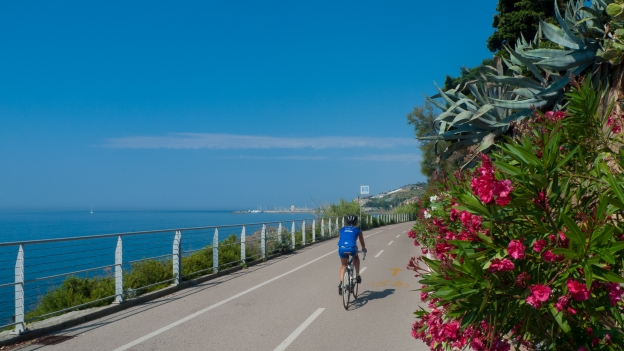 There’s a very compre­hensive site dedicated to the cycleway: pistaciclabile.com (note the spelling of the site name - there’s a national website with a very similar name).

The cycleway has also inspired this video. Videos of cycleways are useful but generally pretty dull and I watch them with the sound turned off and at double speed. This one is defin­itely an exception. The two tracks used in the video are Bartali by Paolo Conte, about one of Italy’s cycling legends, the other is Bellezza in Bicicletta (beauty on a bike) by Trio Lescano. turn up the sound and enjoy (4:01). The second video is a more conven­tional promo­tional video from the Riviera dei Fiori tourism promotion organ­isation (English subtitles) (2:00).