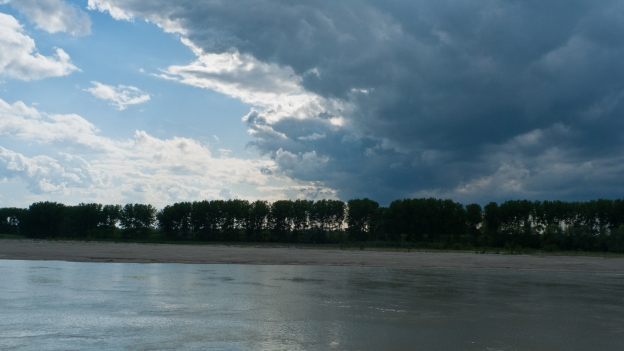 The Destra Po cycleway (also referred to as the Fe20) follows the right bank of the river Po as it heads towards the sea at Gorino on the Adriatic coast. It’s a high-quality surfaced cycleway along the top of the argine, the massive 10 metre-high flood defences along the river’s banks.

The cycleway forms part of the inter­na­tional eurovelo 8 cycle route. This guide takes the city of Ferrara as the starting point. However the complete cycleway runs for 120 kms along the northern border of Emilia-Romagna from Stellata del Bondeno in the west to Gorino on the Adriatic coast. At the western end it connects with the cycleways in the neigh­bouring provincia of Mantova, and at the eastern end you have the option of heading south towards Ravenna, or heading north along the coast of the Veneto towards Venezia.

As you’d expect, this section is almost entirely flat - with the climb to the top of the embank­ments probably the only climbing you’re likely to do.

The major sights are at either end of the route: the city of Ferrara itself and then at the east the Parco del Delta del Po nature reserve, with the Castello Estense. Together these are included on the UNESCO World Heritage list. 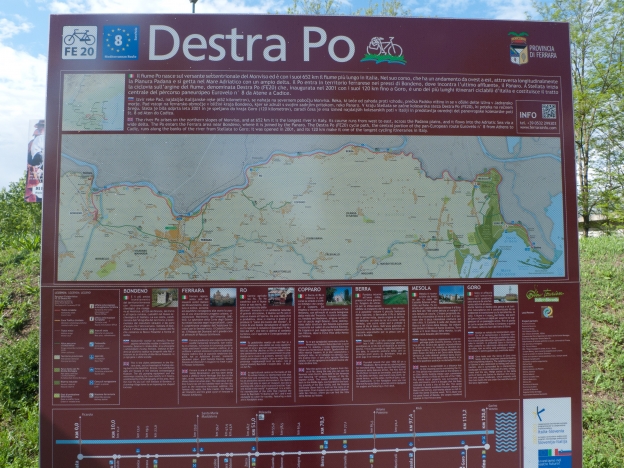 Information board on the FE20/Destra Po cycleway near Ferrara

Ferrara is not only a World Heritage-listed site, but also claims proudly that it vies with Copenhagen for the title of the European city with the highest proportion of cycling citizens. Here’s an extract from the UNESCO citation:

Ferrara is an outstanding planned Renaissance city which has retained its urban fabric virtually intact. The devel­op­ments in town planning expressed in Ferrara were to have a profound influence on the devel­opment of urban design throughout the succeeding centuries. The brilliant Este court attracted a constel­lation of artists, poets and philo­sophers during the two seminal centuries of the Renaissance. The Po Delta is an outstanding planned cultural landscape which retains its original form to a remarkable extent.

Among the great Italian cities Ferrara is the only to have an original plan that is not derived from a Roman layout… developed from the 14th century onwards and, for the first time in Europe, on the basis of planning regula­tions that are in use nowadays in all modern towns … Ferrara [is] the only planned Renaissance town to have been completed. ”

Read the rest on unesco.org

Ferrara’s highlights include the great fortress of the Castello Estense in the centre of town. But if you only go to see one thing I would make it the Salone dei Mesi in the Palazzo Schifanoia (opening hours). You can have a little look around using Google Street View (yes really, and no, I don’t know how they got the car in there either) - although the best pictures are on the Web Gallery of Art. Sadly many of the frescoes are now very badly faded. The ones that there are are left are truly magnificent.

For the darker side of the life of the Este court you can visit the dungeons of the Castello. According to Wikipedia:

Parisina Malatesta was the second wife of Marquis Niccolò III, who was something of a rake and a great deal older than her. After seven years of marriage that had been generally quite calm, she ended up falling in love with her stepson Ugo, son of the Marquis and Stella dei Tolomei, and he with her. The two young people were discovered, subjected to a rapid trial and finally beheaded. It was 1425; Parisina was 20 years old, Ugo only 19.Coming down the stairway, on the left was Parisina’s cell. Following the corridor is Ugo’s one, having, on the ceiling, prisoners’ writing done with candle smoke. ” 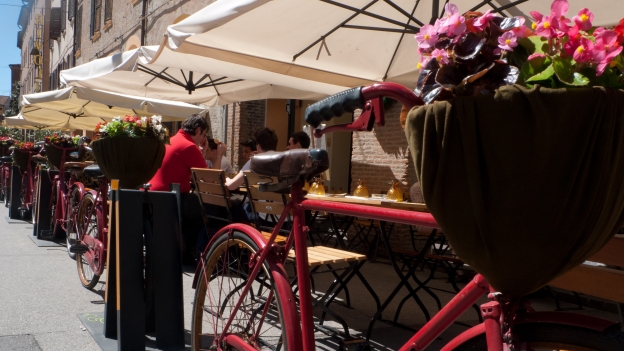 If you fancy getting out into the sunshine you could also take a cycle ride around the city walls as well as its centro storico or explore the medieval centro storico. 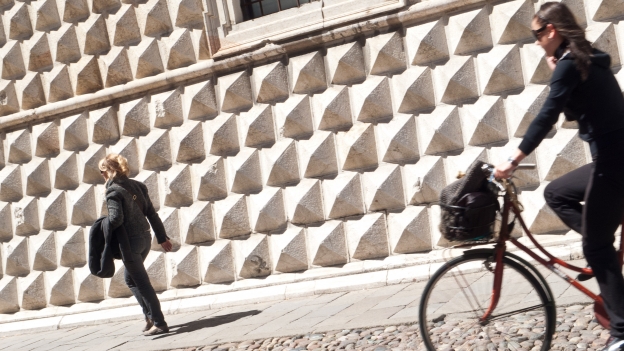 Cyclist in Ferrara (in the background is the Palazzo dei Diamanti)

From Ferrara to Mesola

The ride starts at the Castello Estense in the centre of town, and heads out to towards the Po following the Corso Ercole d’Este. The road takes you past the major palazzi including the Palazzo dei Diamanti, named after the diamond-shaped patterns on its façade. The bad news is that the road is cobbled with small stones - you can do what some local cyclists do and follow the paved strips on either side of the road. At the Porta degli Angeli the FE203 takes you to the banks of the Po at Francolino where you join the Fe20 itself.

There’s not much in the way of services along this section of the route, although there are a couple of fontanelle. However, enter­prising local businesses have put signs up giving inform­ation about bars etc within striking distance of the route.

The next main point of interest on the route itself is the Mulino del Po - a recon­struction of a historic watermill used for grinding flour. The name also recalls a famous Italian novel set in the area (Il Mulino del Po by Riccardo Bacchelli. There’s a picnic area, drinking water source and a restaurant at the Oasi Mulino del Po. Alternatively there are a couple of restaurants and fontanelle in Ro itself.

At Mesola, there’s the Castello Estense della Mesola. The Fe20 continues along the Po, to the little fishing ports of Goro and Gorino, but you also have the option of heading along the Canal Bianco to the Torre Abate, a much-photo­graphed landmark. The Oasi Torre Abate nature reserve is also home to a hostel and restaurant.

South from the Torre Abate is the Bosco della Mesola nature reserve. the woodlands (‘bosco’ means wood) are the remains of a vast hunting reserve.

There are lots of altern­atives on traffic-free or quiet roads, but I’d advise steering well clear of the SS309 Romea - a busy road that when I’ve encountered it, seemed almost to be one long convoy of lorries. 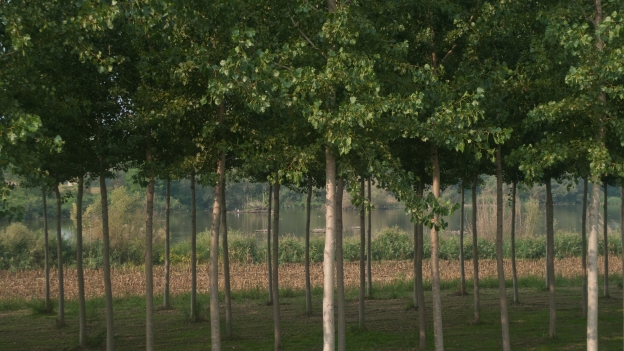 Trees on the Po riverside

If you have the time you could swing further south to visit the Abbazia at Pomposa and the Chiesa di Santa Maria - you could even go as far south as Comacchio and Ravenna. 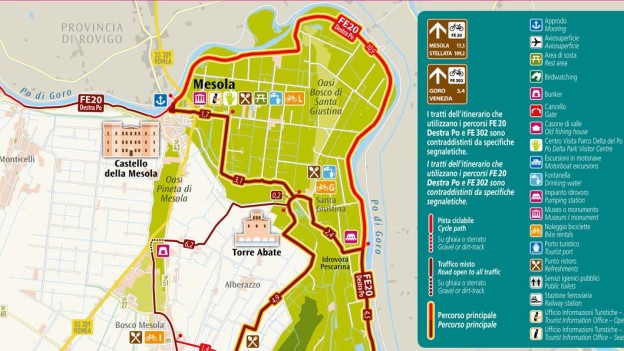 View hotels and other places to stay available on Booking.com:

There’s a regular Trenitalia train service to Ferrara. For the return journey, there’s also a train service between Codigoro and Ferrara operated by the regional transport company TPER (Trasporto Passageri Emelia-Romagna). According to Trenitalia timetable service you need to reserve a place for your bike by ringing 840 151 152. You can check the train times on trenitalia.com or download a timetable from the TPER website tper.it.

Useful websites about cycling in the area 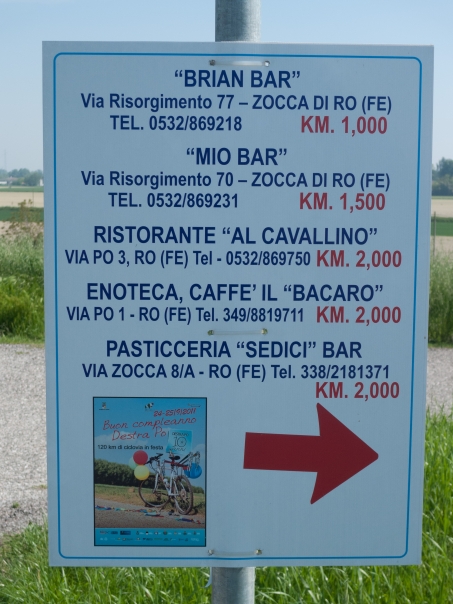 Sign on the Destra Po cycleway showing distances to cafes, restaurants and bars near to the route