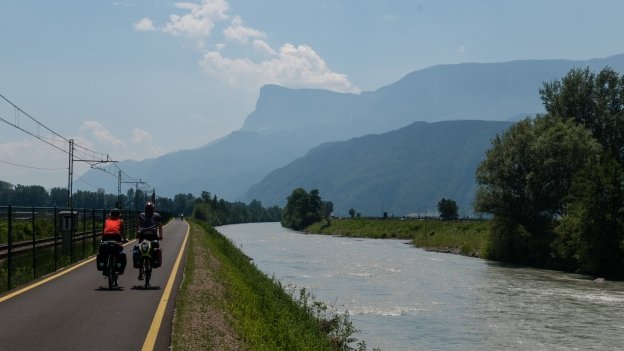 Cyclists on the Etschradroute (Adige cycleway) near Burgstall (Postal)

This page is the intro­duction to a series of articles, it is intended to provide an overview of the route, together with inform­ation on how to get to and from the start and finishing points. The downloads section at the bottom of the page includes downloads of GPS files as well as maps in PDF format.

The route is described in more detail in the articles in the series. You can navigate between them using the Next/Previous arrows at the end of the main article, or the list of links at the bottom of the page (and in the sidebar if your screen is wide enough).

After Meran the main Etschradroute follows the river as it flows south and joins with the Eisack (Isarco) near Bozen (Bolzano). The ride changes too: the cycleway continues on the top of the high flood-protection embank­ments and you ride looking over the vineyards and fields of apple trees that fill the wide, flat, floor of the Adige valley.

Almost all on traffic-free cycleways.

Entirely on asphalt-surfaced cycleways or roads..

The Etschradroute connects with the Brennerradroute just south of Bozen. Further south it continues as the Ciclabile dell’AdigeAdige valley cycleway.

The main altern­ative option is to turn off the cycleway at Sigmundskron (Ponte d’Adige) and follow the Überetsch cycleway as it climbs to Kaltern (Caldaro).You then rejoin the main route again near Auer (Ora).

Bozen (Bolzano) is 5 kilometres off the route following the Eisack (Isarco) river. It’s well worth consid­ering as a side-trip, or if you’re planning on heading north along the Brennerradroute.

Distance: this guide isn’t divided into daily stages, as people differ in how fast and how far they want to travel each day.

‘Traffic-free’: many cycle routes include sections with roads with restricted access for residents or people working on the adjoining land. You may, very occasionally, encounter an agricul­tural vehicle like a tractor pulling a trailer of hay, but most of the time there is no motorised traffic. They are often indis­tin­guishable from the cycleways that are legally set aside for the exclusive use of cyclists and pedestrians.

The table doesn’t neces­sarily show the distances from one city centre to the centre of the next town — if a route skirts around a town the distances are measured to the nearest point on the route from the centre. 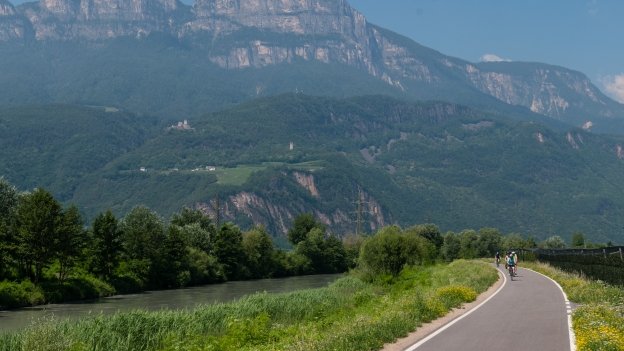 The route through Meran is well signposted. Look out for a sculpture with a bike wheel surrounded by padlocks. The padlocks were left on a nearby bridge by young soldiers at the end of their military service. When the bridge was refur­bished the locks that left were moved to this the sculpture here. One typical inscription reads:

From Meran, the cycleway continues along the left bank of the river. This isn’t the most inter­esting part of the route as you have the river on your right-hand side and the rail line on the other. On the other side of the river is the SS38 road. The SS38 is off-limits to bikes, but the cycleway has good links to the villages along the way.

Unfortunately, there are very few shady places on this section of the cycleway. There are some picnic tables that have been planted with trees, but these are still quite young and offer very little shade. However, near the Lana-Burgstall train station, there’s an old railway bridge that takes you over the river and to a rest area with shade and water and a specially-constructed green cupola which is about as shady as you can get. Next door to the bridge is an old electric locomotive, the Apfel Express (Apple Express) that used to transport apples on a branch line. There’s also a bridge over the railway line which gives you direct access from the cycleway to the train station.

At Gargazon (Gargazzone) there is an underpass that takes you under the railway line and to the open air swimming pool (naturbad) just on the other side of the tracks. 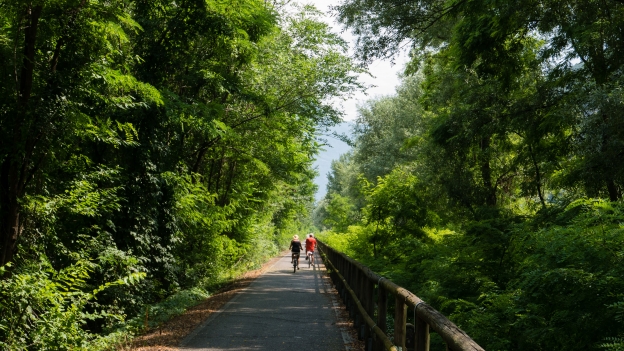 The Etsch/Adige cycleway near Bozen (Bolzano)

At Sigmundskron (Ponte d’Adige) you have the option of taking a variant of the Etschradroute that follows the Überetscher Bahn railway as it heads for Kaltern and the heart of the Südtirol wine country around the Kalterer See (Lago di Caldaro).

Even if you are planning on heading south, the Überetsch cycleway is well worth the effort. You could either do it going to Kaltern and then coming back the same way, or going to the Kalterer See and then rejoining the main Etschradroute near Auer (Ora).

As you come into Sigmundskron you come to a junction with the road, and a sign indic­ating that you need to turn right and cross over the bridge. My advice is to ignore the sign, and instead turn left following the sign for the Radstation Wiesl . There’s a short stretch on the road before you bear right. The road then takes you past the Radstation, over a level crossing, and to an old steel rail bridge. This is the start of the Überetscher cycleway. Go over the bridge if you want to take this variant, otherwise stay on the left bank of the river. 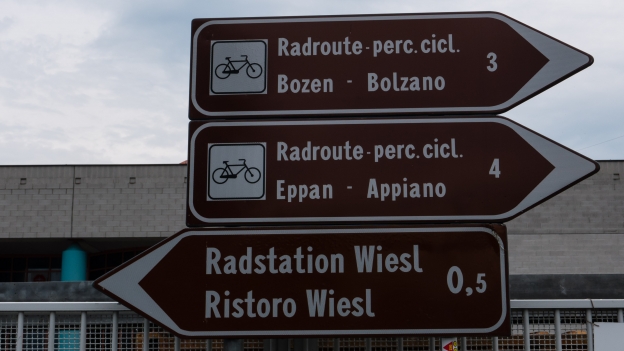 In front of you should see a castle on a hill —⁠ ⁠this is the Schloss Sigmundskron (Castello Firmiano).

A kilometre or so further on, you come to the point where the Etschradroute meets the Brennerradroute. Turn left for Bozen (Bolzano) a bit more than 5 kilometres from here, or turn right to continue south.

The next stop is Auer 16 kilometres further on along the Etsch/Adige. For a little over 3 kilometres, the cycleway follows a narrow strip of land between the Etsch and the Eisack as they flow in parallel before they merge to become the Etsch. At the Bozen city boundary, the route crosses a bridge over the Etsch and picks up a quiet country lane. On the outskirts of Auer you make a short detour to go under the rail line. Turn left if you want to go into Auer, which is a little over a kilometre away, otherwise turn right. 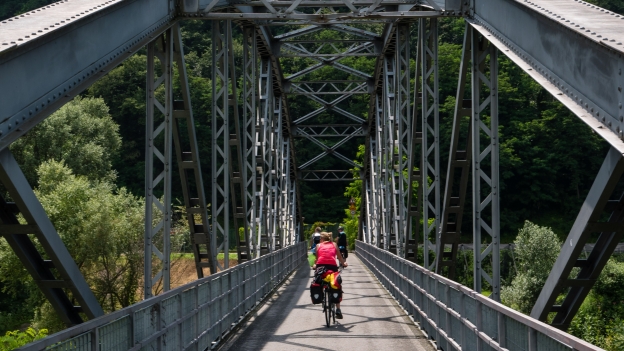 From Auer, the cycleway continues towards the end at the border with the Trentino region. It’s an enjoyable cruise, but by this point, you may have decided that you’ve seen enough vineyards and apple trees. If you want a bit of a change of scenery or a stop for an ice cream, then the Neumarkt (Egna) with its attractive altstadt (old town) is a short detour off the route.

You could also stop off at the nearby Klösterle Sankt Florian once a hospice for pilgrims (including Albrecht Dürer on his way to Venezia).

The cycleway brings you to the bicigrill at Salurn (Salorno). A bicigrill is a café beside a cycleway —⁠ ⁠the name comes from the Autogrills on Italy’s autostrade. The bicigrill by the bridge at Salurn is, for me at least, always a welcome sight and an oblig­atory stop. It’s something of an insti­tution, although it now has a rival for your affec­tions a a few kilometres further on: the Bicigrill Faeda aka Bike Break.

The bicigrill is pretty much at the end of the Etschradroute (or at least before the cycleway crosses into the Trentino and becomes the Ciclabile Valle dell’Adige). Look out for the Schlöss Haderberg on a rocky spike above Salurn. In an area with so many castles, this has perhaps the most dramatic location. 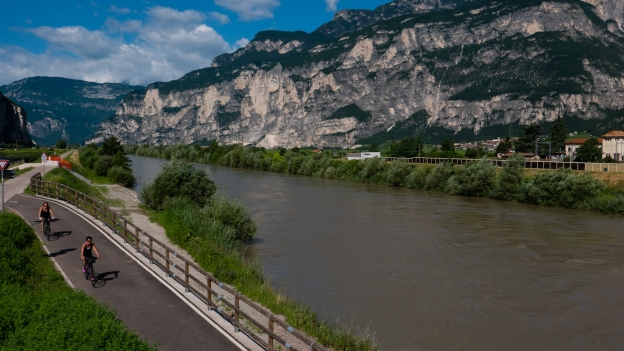 This is a popular tourist area so that there are a lot of accom­mod­ation options —⁠ ⁠although in high season there is also a lot of demand. The main towns are Meran and Bozen, but almost all of the villages along the way will have at least one hotel or gästehaus .

There are hostels in Meran (Jugendherberge Meran) there’s also a jugend­her­berge in Bozen (Jugendherberge Bozen) and Salurn (the Jugendhaus Dr Josef Noldin ). There’s also the Gästehaus Castelfeder but it’s tricky to get to without going on the busy SS48.

Campsites on this section of the main Etschradroute:

Campsites at the Kalterersee

Places to eat and drink

South from Meran, there are far fewer places along the cycleway itself and you may need to make a detour into the villages along the way.

Distances are from the start of the cycleway at the border with Austria. Distances are (roughly) to the nearest point on the route.

Meran, and the stations on the route after it, is served by trains from both the national Trenitalia, as well as the regional SAD company (and you may also see trains operated by Trentino Trasporti). Trenitalia tickets are valid for travel on services operated by the regional train companies.

If you catch a train from one of the smaller stations it may only have a ticket machine for the SAD company, and stations outside the Südtirol may not be listed. Don’t worry; you can sort it out with the train manager when you get on the train. 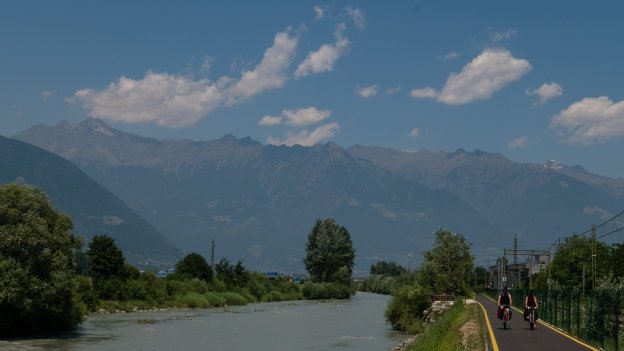