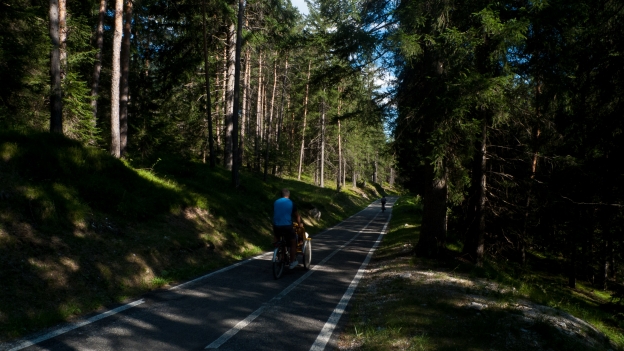 The Ciclabile delle Dolomiti cycleway (formerly known as the Lunga Via delle Dolomiti cycleway) follows the course of an old rail line and connects Toblach (Dobbiaco) with Cortina d’Ampezzo with Calalzo di Cadore in the Veneto. It is almost entirely traffic-free, and provides a handy route into heart of the Dolomites.

The route is very scenic (possibly the most scenic of Italian cycleways), as well as the natural scenery look out for the lovely old stations along the routes.

Tourism promotion bodies for the area covered by the cycleway have got together to commission a video to promote the cycleway. It will give you a very good idea of what the cycleway is like, although you may want to mute the soundtrack. (Lasts 14 minutes).

From Cortina to Calalzo di Cadore the surface is tarmac. Before that that the surface is fine aggregate. The first part, from Toblach to Cortina is well worth doing and I would only avoid it if you have really skinny tyres on your bike.

The cycleway crosses the old pre – 1918 border - you can see the old customs post just before Cortina.

The soldiers buried here were injured fighting on on the Monte Piana (the mountain that you can see towering above the Dürrensee) and died in the nearby field hospital. Originally some 2,000 soldiers were buried here. The Austro-Hungarian empire was a multi-ethnic empire and as well as Austrians and Germans, soldiers from other countries in the empire, were buried here, along with the bodies of prisoners from Romania, Poland, and Russia. 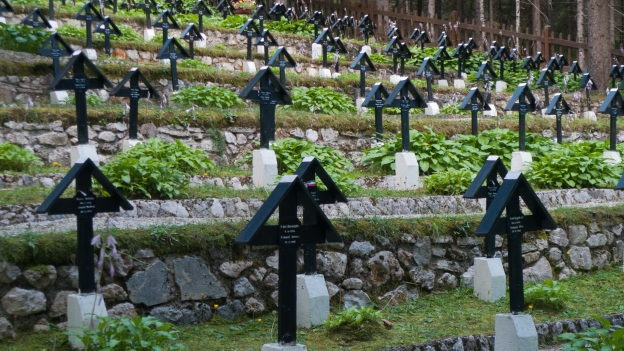 However, even in death, the Nazi government’s racial policies continued to operate so the bodies of soldiers from the other countries that had made up the empire — who were now regarded as Untermensch — were left behind, and, judging from the names on some of the crosses, so were Austrian and German Jewish soldiers.

The cemetery was then effect­ively abandoned. Fortunately, in the 1950s, a local woman, Waltraud Fuchs, took respons­ib­ility for caring for it. Today, it is cared for by her son Hanspeter. It has been declared a national monument — although there are also signs appealing for donations for the cost of its upkeep.

The cycleway provides an extremely useful connection with the Pusterbike (Val Pusteria) and the Drauradweg (Ciclabile del Drava) cycleways which both form part of eurovelo 7. The Pusterbike cycleway enables you to travel to Brixen(Bressanone) or Bozen (Bolzano) as well as the Brenner pass. The Drauradweg connects with Lienz in Austria and from there on to Maribor in Slovenija (where it connects with the eurovelo 9.

At the Veneto end you can follow an older version of the Lunga Via which follows quiet roads to Feltre. You can connect at Feltre and Cesiomaggiore with the Via Claudia Augusta. 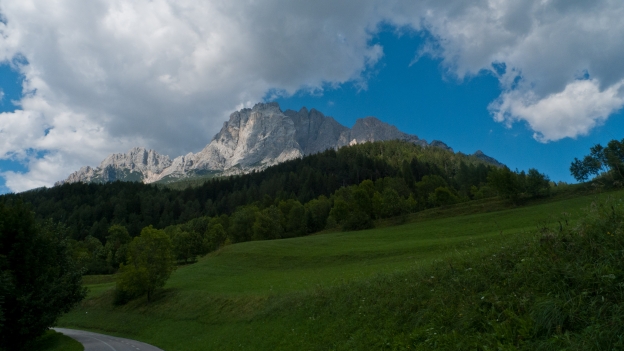 There are lots of hotels along the way. There are campsites at Toblach, Cortina d’Ampezzo and near Calalzo di Cadore:

There’s also a hostel at Calalzo; the Ostello Lunga Via Delle Dolomiti

There’s a train stations at Toblach with frequent bike-friendly services either to Lienz in Austria or to Fortezza Franzensfeste, where you can join the main national rail network. There’s also a train station at Calalzo di Cadore, however you can’t take a bike on most of the services — the exception is a weekly service which runs direct from Venezia. Update: this has now all changed. Travelling in 2018 there were several trains a day. The one I travelled on had space for eight bikes. It leaves Venezia at 7:50 on Saturdays (and public holidays) and returns from Calalzo at 17:40. Download the timetable:  trenitalia.com: Venezia-Calalzo di Cadore timetable.