The Ciclabile del Mincio is a 35-kilometre cycleway along the river Mincio linking Peschiera del Garda in the Veneto and Mantova in Lombardia. The cycleway is an important link in the Ciclopista del Sole (eurovelo 7) but is also a very popular day-ride.

There’s also a video on youtube (courtesy VeronaReport). It’s worth a look even if you don’t speak Italian:

I must admit that after watching this video I was kicking myself for not having made a stop at Borghetto - although I have stopped at its close neighbour, Valeggio sul Mincio which I’d also defin­itely recommend 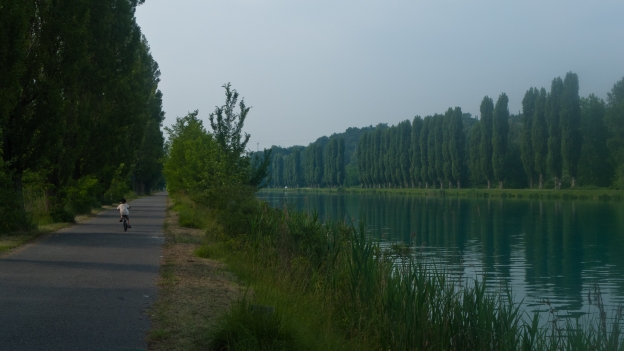 Peschiera del Garda is lovely little place but probably it’s chief attraction is the Gardaland theme park. Borghetto on the route is a great place to make a stop, as is its larger neighbour Valeggio.

Mantova is one of those places that is easy to bypass, but it would be a shame to do so. In particular there’s Andrea Mantegna’s Camera degli Sposi - which, because it was a fresco is one of the few gems that wasn’t bought by the agent of the British king Charles II when Mantova’s ruling family fell on hard times . 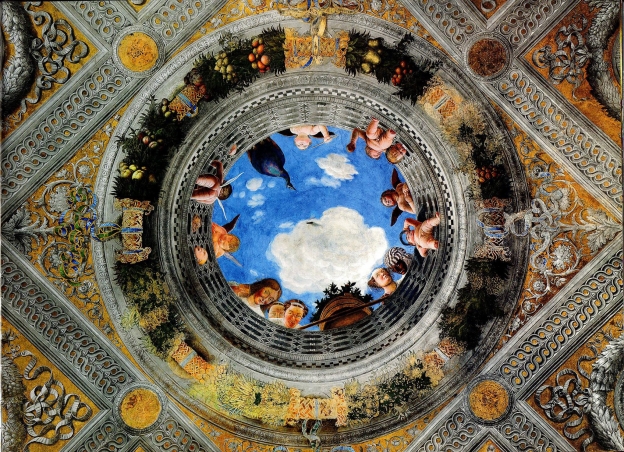 If you are cycling in the area there are plenty of options. The excellent Mantova in Bici map/leaflet shows you all of the cycleways in the area, including the network of cycle routes in the Parco Regionale del Mincio - which mean you could make the journey there and back without having to retrace your steps.

As well as being part of the national ciclopista del sole route, the cycleway also connects to national east-west routes the Ciclovia del Po e delle Lagune (eurovelo 8), which follows the river Po to the coast, and the Laghi di Lombardia route (see Lakes of Lombardia and Piemonte on this site).

It also inter­sects with the the Ciclovia Tirrenica a national route that starts in Verona and heads via Mantova to Parma and then the coast of Toscana. 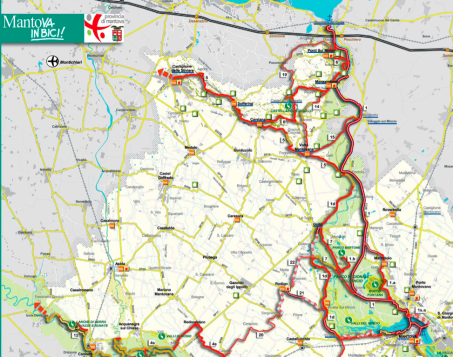 There’s a hostel at Rivalta sull Mincio (the Ostello del Mincio). There may also be one in Mantova itself, the Rocca del Sparafucile - however I’ve not been able to confirm this so best ask at the tourist inform­ation office.

There are loads of campsites in and around Peschiera del Garda. But the Lago di Garda can also get very busy - it’s one of the few places where I’ve been turned away from campsites (top tip everybody goes to the sites nearest the centre of town so they fill up first).

Heading south campsites are few and far between: I didn’t know about it at the time, but the Agricampeggio Borghetto near Valeggio sul Mincio looks like it might be a good bet. Near Mantova there’s the Agriturismo Corte Chiara.

There are stations at both Peschiera del Garda and Mantova. It takes about 75 minutes to travel between them (changing at Verona). Note that you can only take bikes on the regional trains (see Getting around: local and regional train services for more information).

The turismo.mantova.it website isn’t brilliant but the provincia produces some useful paper guides that are also available for download:

There’s also a map of the Peschiera-Mantova cycle path along the Mincio river: