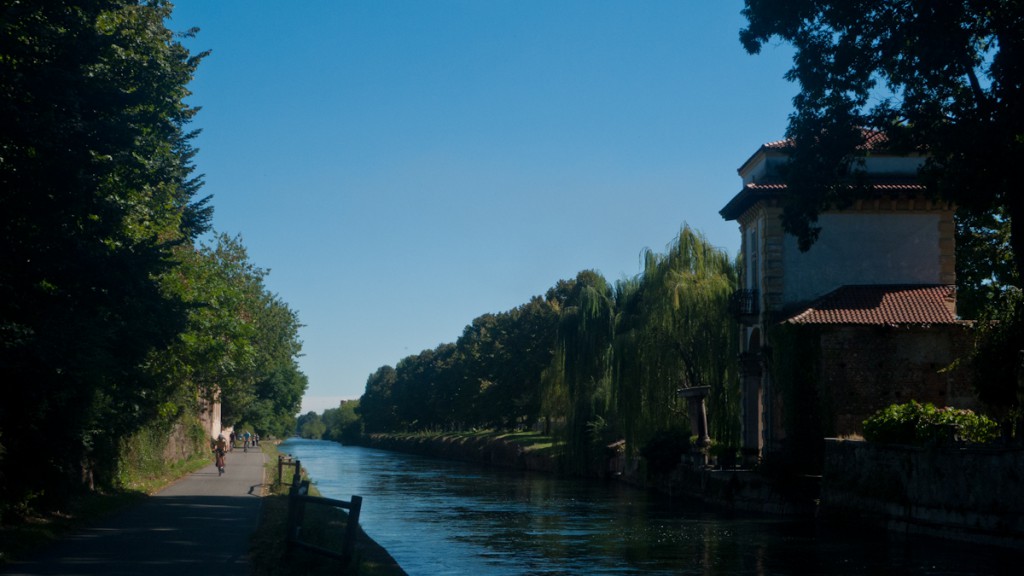 One of my favourite river rides and quite possibly one of the nicest in Italy. If you’re riding south-to north you’ll gradually start to see the mountains appearing on the skyline.

The route is mainly traffic free and on asphalt - although there are a few sections on the first half of the route (if you’re starting from Pavia) where the tarmac has deteri­orated and is a bit rough.

As well as being a great ride in its own right the route provides a useful connection between the Po and the lakes - as well as an option if you are riding to or from the Milano Malpensa airport.

The Ticino cycleway follows the course of the Ticino river between the city of Pavia on the Po and the town of Sesto Calende on the Lago Maggiore. While it’s named after the Ticino, for most of its length the cycleway runs along the banks of the Naviglio Bereguardo and the Naviglio Grande.

The section from here is the most beautiful. The Naviglio takes almost all of the way into Sesto Calende, with a short but very scenic section by the river into the town itself.

At Pavia the route connects with the Ciclovia Francigena (until recently called the Ciclovia dei Pellegrini) part of the eurovelo 5 - the cycling version of the Via Francigena. At Sesto Calende you can pick up my Tour of the Western Lakes or the Lakes of Lombardia and Piemonte tour.

There is a hostel in Pavia (the Ostello Santa Maria in Betlem as well as a number of hotels - although some of the hotels claiming to be in Pavia are in fact a few kilometres out of town.

There’s a campsite in Pavia, the Camping Ticino. However, when I went there in 2012 it was closed for refur­bishment and due to reopen in 2013. The website is up and running with a 2013 price list so it looks like it is indeed due to reopen, but it might just be worth a phone call in advance. There are a number of campsites in the area around Sesto Calende. I stayed and can recommend the Camping Italia Lido.

There are train stations at Sesto Calende and at Pavia. The route also passes close to the Milano Malpensa airport - Google Street provides a handy way to check your approach route