The main train line through the region runs through the Adige valley — with Verona to the south and Bozen (Bolzano) to the north (and after that, the line continues to Innsbruck and beyond).

There are three companies running services along the line:

Trenitalia operates services to Brenner on the border from Verona and Bologna. These can get very busy, and you may find that there’s no space left. Don’t forget that you need a ticket for your bike (3.50€, or the single fare).

The Deutsche Bahn/ÖBB Eurocity services have a dedicated wagon for bikes. However, you have to have a bike reser­vation, which costs 10€. They are a good option if you are planning to head for, say, Innsbruck or München, but less handy if you are only planning a short hop.

Bike tickets on these lines cost 2€.

I don’t know whether the Trenitalia passenger and bike tickets are also valid on Trentino Trasporti trains, and vice versa. So it would be worth asking, or taking the safety-first approach by buying additional tickets for this part of your journey.

Note that in Trento the Trentino Trasporti station is next door to the main Trento station.

The Valsugana cycleway is supported by a train service between Trento and Bassano del Grappa. Trains run every hour and can carry up to 6 bikes, but in July and August there’s an extra carriage for bikes giving a total capacity of 32 bikes.

If you don’t want to go all the way to Bassano del Grappa, you can catch a train back from one of the inter­me­diate stations, the most convenient are Borgo Valsugana, Primolano, Grigno, Tezze di Grigno, or Cismon del Grappa.

The trains with special coaches can take up to 36 bikes, but the normal trains have space for six. Trentino Trasporti says that it’s advisable to book for these trains. You can reserve bike places by ringing Trentino Trasporti (+39 0461 821000) before 16:00 on the day before travel.

The trains run from the main Trento rail station and not from the next-door Trentin-Trasporti station.

The trains are operated by the regional train company Trentino Trasporti. The normal trains have spaces for four bikes, but in summer there are special services that have spaces for 18 bikes. These run a couple of times a day in either direction. In addition to the trains from Trento, there are also trains that run from Mostizzolo, close to the end of the route, to Mezzana. During the summer there are four trains a day with a carriage that takes up to 60 bikes. 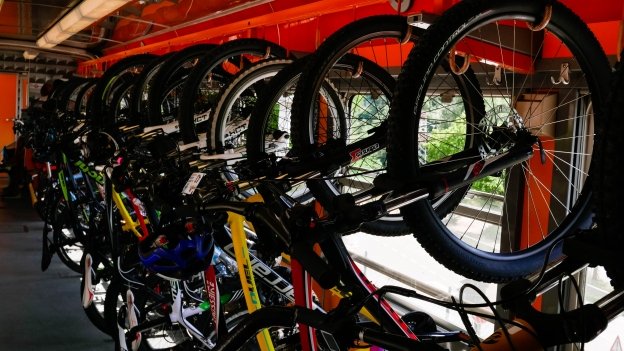 Bikes on the Trentino Trasporti train between Mostizzolo and Mezzana

Access to the station at Mostizzolo is a bit tricky, as it involves a left turn onto a main road and then a short section on the road. If you’re planning on catching the train back, the most accessible altern­ative stations are at Croviana and Malè.

Bike tickets cost 2€ (2018). So far as I know, you can’t reserve bike spaces. If you’re staying in the area, ask your accom­mod­ation provider about a Trentino Guest Card. These give you free transport during your stay.

Note that the Trentino Trasporti station is next door to the main station in Trento.

There are also bike buses that run between Mezzana and Passo del Tonale and between Dimaro and Carisolo. Note that these don’t run every day, so be sure to ask at a tourist office, or download the Find your bikebus & biketrain leaflet (valdisole.net: Find your bikebus & biketrain .). Both bus services connect with the Trentino Trasporti train services. 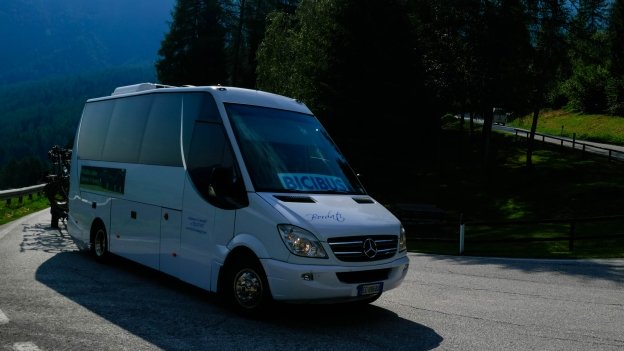 Bicibus on the way from Dimaro to Madonna di Campiglio

You can download a pdf copy of the timetables for the Trentino Trasporti trains from the train section of the company’s website: trentinotrasporti.it: train.

The Fiemme-Fassa Express bicibus service serves the Val di Fiemme-Val di Fassa cycleway. It runs three times a day between mid-June and the middle of September. The timetable only gives the times running uphill from Molina di Fiemme — which is, of course, the easiest way to go — I am assuming that this means they only run in one direction. 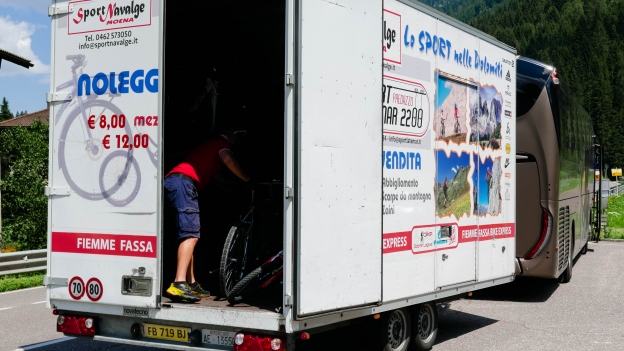 
For more inform­ation on the Fiemme-Fassa Express bicibus service see:

Between mid-June and the middle of September, there’s a network of five bicibus services in the north-western part of the region (the area between the Lago di Garda and the Brenta Dolomites). In general, the services run four times a day in each direction; three of the lines run every day, while the other two run five days a week.

The five lines are:

Fares depend on the distance travelled, plus a flat 2€ per bike, but you can travel for free with the Trentino Guest Card or one of the other local guest cards. You can buy the tickets on the bus.

The buses (or at least all the ones I’ve seen) have trailers that can carry 28 bikes.

According to the English-language leaflets advert­ising the service you have to book before 18:00 for buses the following morning, and by midday for services in the afternoon, but the Italian-language version of the leaflets says booking is advised; it’s probably a good idea to book, but even if you don’t have a booking it may be worth turning up anyway. 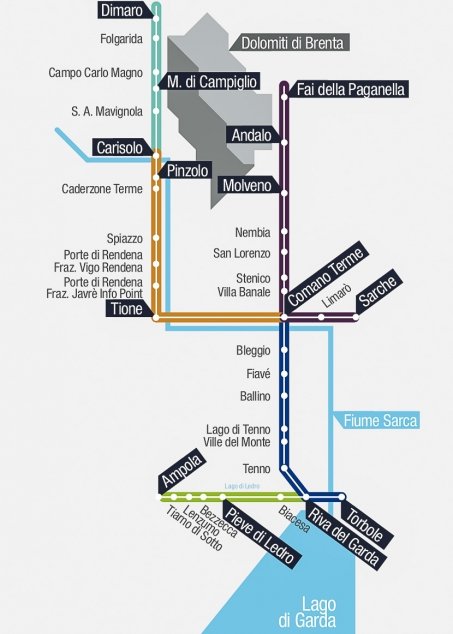 
For inform­ation on the BiciBus services around the Lago di Garda see:

The train and bus services are supple­mented by several bicibus services. These are buses with bike trailers — in most cases these can carry at least 28 bikes, and sometimes more.

The cycleways with bicibus support are:

In addition, there are bicibus services that provide transport to or from cycleways. These include a bus that runs between Dimaro in the Val di Sole and Carisolo in the Val Rendena.

Boats on the Lago di Garda

During summer the towns on the Lago di Garda are served by frequent boat services. You could use these to connect with the mainline train network at Peschiera del Garda. The most bike-friendly option are the two old car ferries, which have a huge amount of space for bikes. These sail a couple of times a day in either direction, giving four sailings in total. The smaller boats (batelli) have only limited space for bikes, and bikes aren’t allowed on the fast hydrofoil services. 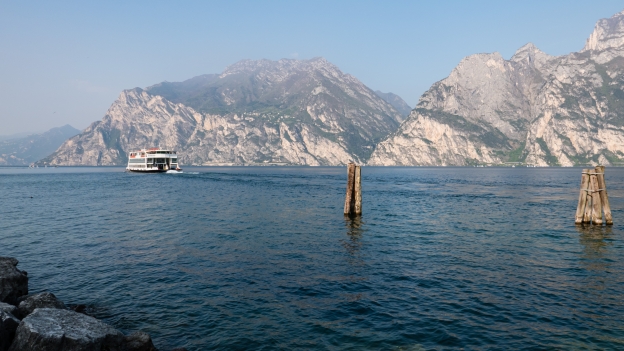 Ferryboat coming into shore at Torbole on the Lago di Garda. The picture shows one of the larger boats with more capacity for bikes

If you’re spending time in the region, it’s worth checking out the Trentino Guest Card. The major benefits for cyclists are free use of the train and bicibus services, as well as free entry to many museums and other attrac­tions.

The card is available from parti­cip­ating accom­mod­ation providers (including hostels and campsites). For a list see: visittrentino.info: Guest Card: parti­cip­ating accom­mod­ation providers . You need to be staying for a minimum of two nights — but the website also suggests that you ask about the card even if you are only staying for a single night, as you can buy it for a very special price. If you’re planning on doing a lot of sight­seeing, you can also buy the card for 40€ for a week.

There’s a pdf map/brochure if you want to find out more. There’s also an app for Android/iOS.

Most of the holiday areas in the region have a local Guest Card that offers similar benefits.

You can download a pdf copy of the timetables for the Trentino Trasporti trains from the train section of the company’s website: trentinotrasporti.it: train.