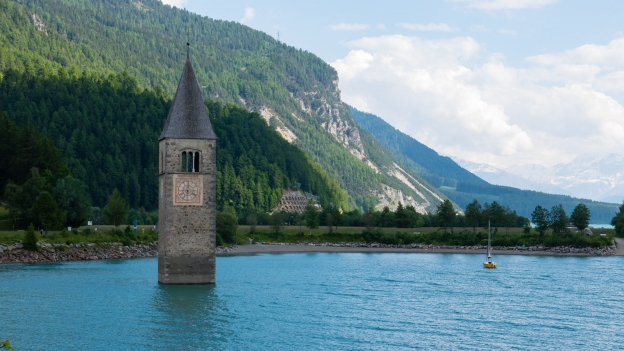 Through the Vinschgau (Val Venosta) to Meran

The Vinschgau cycleway (Vinschgau Radweg or Ciclabile della Val Venosta) runs for 78 kilometres between the Lago di Resia (Reschensee) at 1504m and Meran (altitude: 325). You could do it from Meran to the Lago di Resia, but the train to Mals (Malles) provides an easier option (but make sure to read the inform­ation in the Getting there section further on.

You could simply cycle from Mals, but for my money the climb to the Reschensee (Lago di Reisen) is well worth the effort. Not just to see the lake with its iconic sunken church tower but also for the glorious ride down to the village of Sankt Valentin auf der (Sant Valentino all Muta) Heide, which is one of the prettiest villages in the area. The climb involves a 400 metre altitude gain over 17 kilometres.

Equally, you could do this cycleway in a single day, but equally there is so much to enjoy along the way, and lots of places to stay, that it would be a shame to rush it.

You can cycle on either the west or the east banks of the Reschensee (Lago di Resia), but you may well want to make a detour to see the submerged bell tower at Graun in Vinschgau which has become a symbol for the whole area. 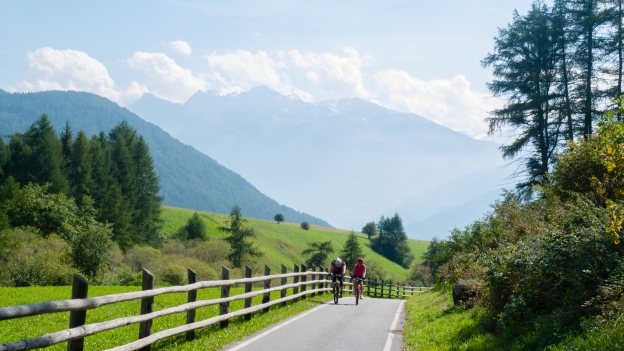 Beyond Mals is the medieval town of Glurns (Glorenza) - officially Italy’s smallest city, and defin­itely worth a brief stop. Look out for its porticoed streets, the massive fortified gatehouses and the wooden bridge over the river.

From here the cycleway takes you to the lovely village of Sankt Valentin auf der Haide a little way further on. Look out for the Kloster Marienburg on your right-hand side as you cycle towards Mals (Malles). The Abbey also owns the nearby Castel Fürstenberg - now a college for agriculture and forestry. 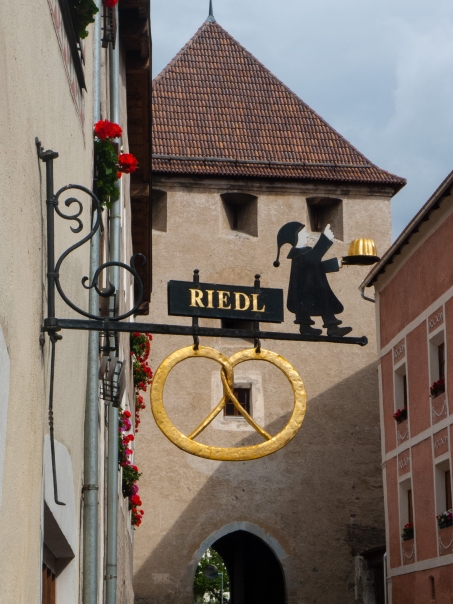 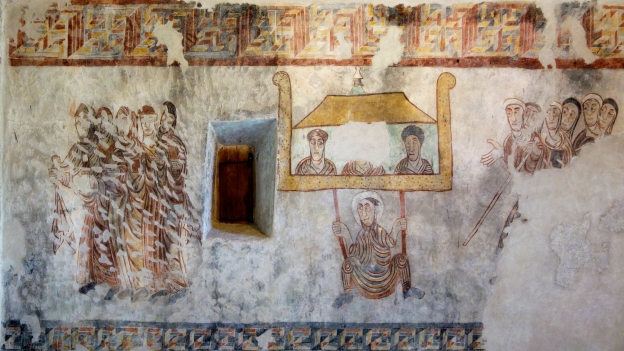 After Naturns comes the spa town of Meran. I would defin­itely advise detouring off the cycle route to explore the city centre. If you have the time and the inclin­ation you might want to visit the spa itself (opening times and prices). (You may also want to check out the link for the Piscina Naturale/Naturbad at Gargazzone (photogallery | opening hours and prices). Take the underpass that links the cycleway with Gargazzone and then follow the signs.

You could also visit the Schloss Tirol castle - home to the dukes of Tyrol until they moved their capital to Innsbruck, or the gardens of the Trauttmansdorff Castle. 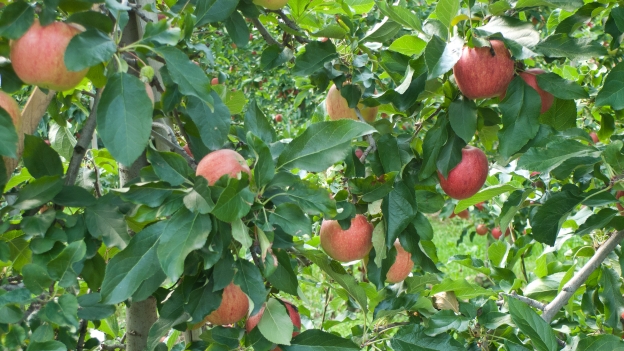 Apple trees in the Südtirol

You are now in the heart of Italy’s Apple country. This area accounts for half of Italy’s apple production and if you add in neigh­bouring Trentino they produce three-quarters of Italy’s apples (1.5 million tonnes). If you’re imagining orchards I’m going to have to disap­point you - ‘apple plant­a­tions’ might be a better term as the apple trees are trained along steel wires strung between concrete posts. Sadly, while many native varieties of apple face extinction, the apples produced in the apple plant­a­tions are the same varieties you’ll find on super­market shelves the world over (with the same names too).

You’ll see people drinking local apple juice in the bars, but strangely, they don’t make cider (or at least it seems strange to someone who comes from Britain’s West Country where cider has always rivalled beer).

The Vinschgau cycleway also connects at Meran with the Etsch Radweg/Ciclabile dell Vall’Adige (together they form part of the Via Claudia Augusta) that takes you to Bozen (Bolzano). Most people head south from Bozen on towards Trento but you could also north towards Brixen (Bressanone) and from there take the Pusterbike through the Pustertal (Val Pusteria). See Südtirol cycleways and the Pusterbike cycleway for more information.

Vinschgau Radweg, looking down towards the Vinschgau (Val Venosta) and your reward for making the climb

There are plenty of campsites along the route.

The cycleway through the Vinschgau (Val Venosta) has become so popular that, during the summer, there are restric­tions on when you can get on a train with your bike. There’s also a bike transport service.

At Merano train station you can load your bike on a truck and use the transport service for bicycles until Malles. The bike can be collected in the dedicated area areas at the following train stations: Naturno, Laces, Silandro, Spondigna and Malles.

Groups can book their own back transport service also outside the above-mentioned time schedule by calling: +39 0473 201 500. Daily ticket for bikes: 7 euro.

ATTENTION: in order to carry your bike on trains in South Tyrol you need an additional ticket. A daily bike ticket costs 7 euro and must validated before each ride. In case of overcrowded trains the access with bike on board can be denied.

Transport of bikes is in wagon A and there is a maximum of 15 bikes. ”

The wording on the website is slightly ambiguous: it says that the cost of the transport service is the same as the cost of a day bike-ticket. I don’t know whether that means that, your 7 euros gets you a ticket that is also valid on the train for the return leg. The tickets for the bike shuttle are available at the ticket offices or at shuttle service departure point. 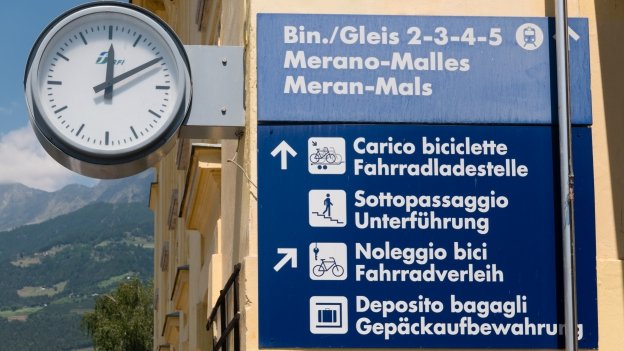 If there’s a group of you, bikeshuttle.at, based just over the border in Nauders, taxi services aimed at cyclists. They also offer a bike return service from Verona, the Lago di Garda and Venezia.

The BikeMobil Card and bike rental

The Südtirol government also seem to have worked hard to make renting a bike a convenient option with rental points at many stations. The BikeMobil a card that is valid for transport on the region’s rail and bus services, as well as some cable lifts and the Swiss Post Bus service to Müstair. The card (available for 1, 3 or 7 consec­utive days) includes a day’s bike rental. Note though that you are not allowed to take your rental bike on public transport — the idea is that you rent your bike from one of the rental points in the scheme, go for a ride and then drop it off at another rental point

There’s a dedicated website (suedtirolbike.it it/de/en) with all the inform­ation you need about the 22 rental shops in the area and the range of bikes on offer. They offer one-way rental as well as sports road bikes and electric bikes.

The Südtirol has excellent regional tourist inform­ation website and this are the ideal starting points for planning your trip:

There are also useful independent websites (see the useful websites pages for the regions). 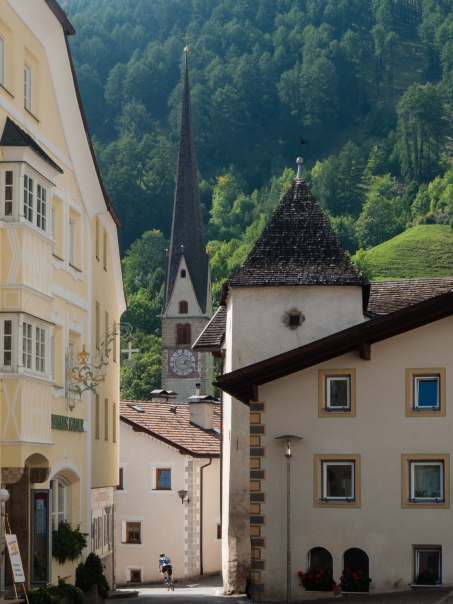