There’s nothing in the Book of Rules that says you have to cycle every inch of the way. Italy has good public transport links and they provide a useful way to get to or from the starting point of your tour, visit different parts of the country, combine the mainland with one of the many islands, island-hop along the Venetian lagoon or simply avoid a dull detour.

The main train company in Italy is trenitalia (or Ferrovie Statale - FS). As for most rail networks in Europe, there’s a difference between regional and long-distance train services. 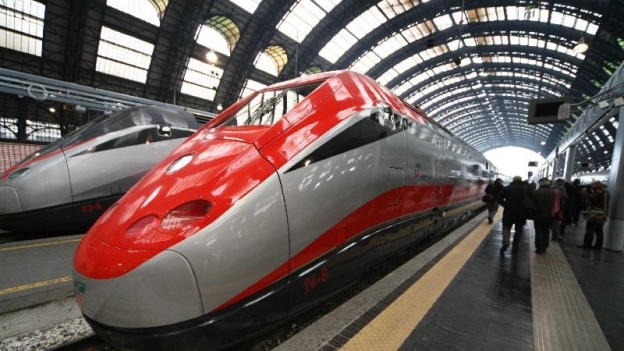 These normally have spaces for carrying an undis­mantled bike. On the older trains, there is a large compartment behind the driver, on newer trains bike spaces are in the middle. Look for the big white-on-blue pictogram. Bikes hang on a hook with another holder for the back wheel which may be under­neath a folding bench seat. Sometimes, although the train officially has a bike compartment you may not see one - you should still be able to put the bike in the compartment (bagaglio) where the guard has a little desk.

The ‘regional’ trains can, in fact, cover quite long distances — eg there’s a regional train service between Verona Porta Nuove and Milano (or at least there was in March 2017 when I updated this. Hopefully, I’m not tempting fate.

For long-distance journeys there are:

I’ve made several journeys with my bike in a Ground Effect Tardis which is very slightly over that size, without any problem. Provided you don’t leave your bike bag where it’s going to be in anyone’s way, the capo di treno won’t take any interest. If you can’t find anywhere then it’s a good idea to go in search of her and ask if there’s somewhere where you can leave it.

In addition to the Trenitalia there are other train companies operating long-distance trains in Italy.

Italo are a new train operator offering high-speed train services in compet­ition with trenitalia. I’ve not travelled with Italo but their trains are built by Alstom who also build the French TGVs and the Freccierosse - and the internal layouts seem pretty similar. They don’t have bike-carriage facil­ities. According to the English version of the FAQs:

“ Prams, pushchairs and folding bicycles are classified as standard luggage. They should be folded away and placed in the relevant spaces on board.
Oversize luggage, standard bicycles and bulky items are unable to be trans­ported.

For the safety of all passengers and to protect your bicycle, we strongly recommend that it is enclosed in a protective bag or cover.. ” 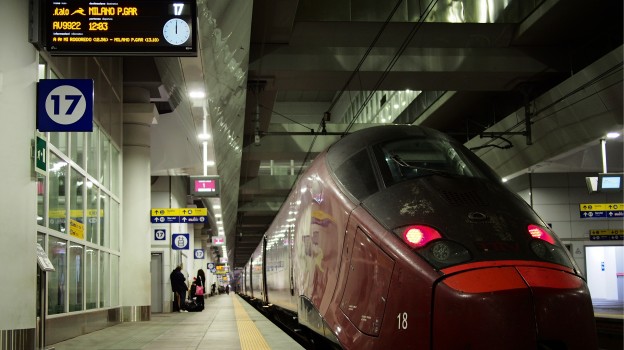 Another operator is a joint venture between Trenitalia and the German and Austrian railways. It operates services between Munich, Innsbruck and a number of northern Italian cities including Bologna, Verona and Venice. All of their services now have space for at least 16 bikes, and some have dedicated carriages for bike transport. This is an option that is well worth consid­ering even for travel within Italy, at least for longer distances. It costs 10€ to book bike spaces.

For more inform­ation your best bet it to go to the Italian-language section of the Deutsche Bahn website bahn.com.ÖBB also has its own website for its services to and from Italy obb-italia.com (de/it). 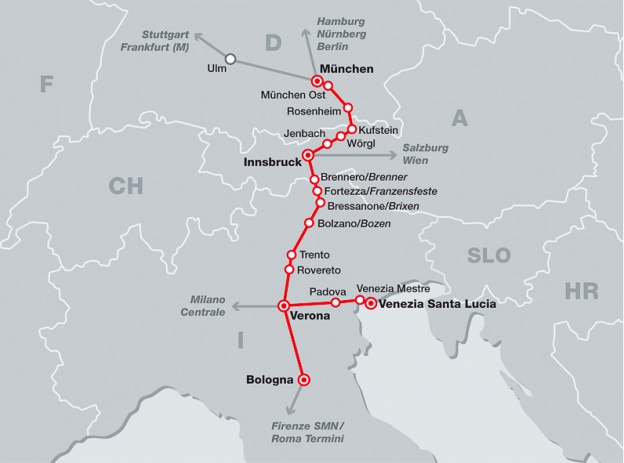 All of the larger lakes in Italy have boat and ferry services. These can be an extremely useful altern­ative in avoiding busy roads or simply cut out a dull road. If you are travelling in the Italian Lakes a boat-trip you really should take at least one ride on a vaporetto. In my exper­ience, the boats and ferries are bike-friendly, although carriage may be at the discretion of the captain and subject to the avail­ab­ility of space. There’s plenty of space on car ferries but the space on boat services may be more limited. It’s important to note that you cannot take bikes on most of the boat services around Venezia (there are a couple of excep­tions - see my article on island-hopping along the Venetian lagoon: from Chioggia to Punta Sabbioni).