In Italy the regional govern­ments have a major role in public transport, including train services. In some regions, there are local train companies owned by the region, while in others the national rail company may manage the services, but under an agreement with the regione, and in a number of places, you’ll find a combin­ation of the two.

This started out as a brief roundup of the local train companies I knew about. But it turned out that there are a lot more than I thought. You can use the list, or the map, to jump to the region you’re inter­ested in.

The metro­pol­itana in Torino and the rail services in the Piemonte region are run by SFM (Servizio Ferrovia Metropolitana). This company is a joint operation between the national trenitalia and GTT (Gruppo Torinese Trasporti). Trenitalia are responsible for 6 lines while GTT are responsible for two (including the line that serves Torino airport).  Show map of the SFM rail network in overlay (design by ‘Arbalete’ source: Wikimedia Commons)

Information about taking your bike on the SFM-operated trains is set out (in Italian) on the FAQs page sfmtorino.it: FAQs). The main points are:

You can take a bike on all of the lines except the FM2 line that runs from Pinerolo in the south-west to Chivasso in the north-east via Torino.

You’ll need to buy a bike ticket. On the SFM lines (1 and A) you simply buy a second ticket for your bike. On the Trenitalia trains the cheapest option is usually to buy a bike day-ticket for 3.5€.

The SFM website gives the sensible advice to avoid rush hours if possible.

Trenord is the company that operates 42 regional lines in Lombardia, as well as 10 suburban lines, around Milano and the Malpensa Express. Download network maps from this page: trenord.it network maps.

You may transport up to a maximum of 5 cycles per carriage on trains without cycle compart­ments, provided that this does not adversely affect the normal rail service. During peak periods in particular, restric­tions may be placed on the carriage of cycles, including those bearing the appro­priate symbol, at the discretion of staff on board.

You need to buy a ticket for your bike which costs 3€ and is valid for 24 hours from the time you stamp it. 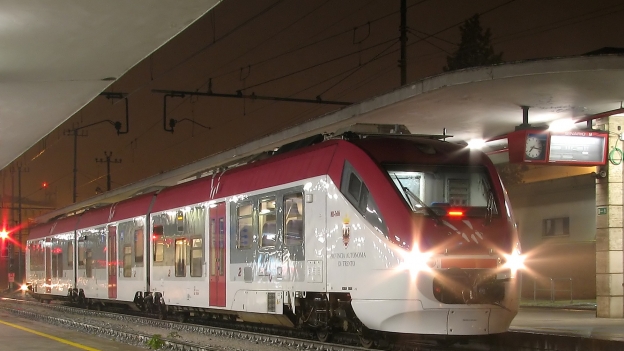 In the Trentino local train services are operated by trentino trasporti they operate services between Trento, Cles, Malè and Marilleva (these serve the Val di Sole cycleway). You can get timetable inform­ation from the trains page of the website ttesercizio.it: trains). So far as I can see all the trains carry bikes, and indeed, during the summer, they are equipped to carry 18 bikes. There’s even one train a day (leaving Trento at 8:30 and returning from Marilleva at 17:30) that can carry up to 60 bikes.

The Trento-Bozen trains operated by the provincia between Verona and Bolzano, can carry between 6 and 18 bikes (note that tandems and trailers are specifically excluded from these services).

You should usually be able to take your bike on extra-urban bus services (see this page: trasporti.provincia.tn.it: trasporto bici - although this depends on the type of bus, and there’s a limit of two bikes. And while I’m passing on good news, you can also take your bike on the Funivia between Trento and Sardana.

You can get more inform­ation about taking your bike on Südtirol Bahn trains from their website (ferroviavalvenosta.it: bike and train). You have to scroll down past the inform­ation about bike hire - in summer cycling is very popular so even though the trains have the capacity for up to 18 bikes, the region seems to be working hard to encourage people to rent rather than carry their bikes on the trains.

Capacity has been a particular problem on the line between Bozen, Meran and Mals. When I rode on this cycleway it, you could just get on the train with your bike and head for Mals. It looks like this option was too popular and now during the summer bikes are trans­ported separ­ately by road and you pick them up at the following stations: Naturn, Latsch, Schlanders, Spondinig or Mals. The regional train company’s website ferroviavalvenosta.it: train and bike (also at vinscherbahn.it), says that from May until the end of October, between 8:00 - 13:00 and 15:00 - 17:30 you cannot board the Vinschgau train with a bike at Merano, Marlengo or Lagundo. The radwegvinschgau.org site says that the bike transport trucks leave from Meran at the following times: 09.16, 10.16, 11.16, 16.16, and 17.16. The price is 4€ per bike. For more inform­ation, you can phone the Vinschger Bahn on 0473 201500. 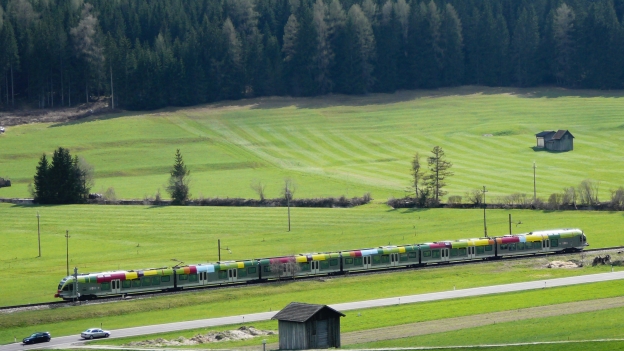 There’s only one train line in the Veneto that isn’t operated by Trenitalia. The Linea Adria-Mestre links Venezia Mestre station with Adria at the mouth of the Po. Each train can carry up to 5 bikes and a bike ticket costs 2.60€

Again trains can carry a maximum of five bikes. You need a bike ticket - the ticket costs the price of a ‘tariffa ridotta’ ticket for the journey (for Udine-Cividale the 2014 price is 2.35€).

The regional transport company is TPER (Trasporto Passageri Emilia-Romagna) ).  show TPER network map in overlay. According to Trenitalia’s timetable service you need to reserve a place for your bike by ringing 840 151 152. You can check the train times on trenitalia.com or download a timetable from the TPER website tper.it 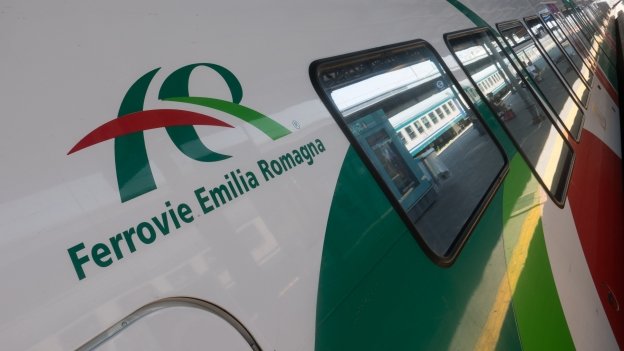 The Ferrovia Centrale Umbra operates a line that runs north to south through Umbria linking Sansepolcro, Perugia, Terni   show network map in overlay.Update: this line has now been trans­ferred to the RFI, the state company that owns most of the Italian rail network. Most of the services seem to have been replaced by buses. There seems to be only one bike-friendly train a day between Perugia and Città di Castello. For timetables see this page: busitalia.it: Umbria servizi ferroviari or the regional timetables page on the Trenitalia website: trenitalia.com: orari regionali

Trenitalia operate the Ferrovie Regionale del Lazio on behalf of the Lazio region. The network comprises the eight commuter lines that converge on Rome.   show Lazio railways network map in overlay (design by ‘Arbalete’ source: Wikimedia Commons). According to Trenitalia, 70 percent of the trains on the FL lines carry bikes. The bike-friendly trains are spread across all services, so it’s best to check the trenitalia website for the specific service you are inter­ested in (see my article: using the trenitalia website to search for bike-friendly trains).

Metropolitana underground and other services

According to the Roma Capitale website at Saturdays and on weekdays after 8 pm (the site doesn’t mention Sundays) you can take a bike on the two lines of the Metropolitana as well and the Roma Lido (Ostiense - Ostia) service. The website includes this notice:

Local trains out of Napoli are operated by the Circumvesuviana. Circumvesuviana means ‘around Vesuvius’ - the lines that run along the coast to Sorrento and to the north and east of the mountain.  show network map in overlay (source Wikimedia Commons).

You can’t take a bike on the Circumvesuviana services, however, according to the Cicloverdi (the local cyclists’ organ­isation), at quiet times the ticket inspectors often turn a blind eye.

However, I suspect that in summer you’ll be unlikely to find a quiet train on the line along the coast that goes to Sorrento via Paestum and Pompeii.

Update: this has now changed, and you can take bikes on these trains.

Puglia has about 1500 kilometres of rail line with almost half owned and operated by local companies. The good news is that the regione is investing heavily in new, bike-friendly trains, the bad news is that there a still a few older trains about which aren’t equipped to carry bikes, so in the meantime, you need to check which trains you can take your bike on. 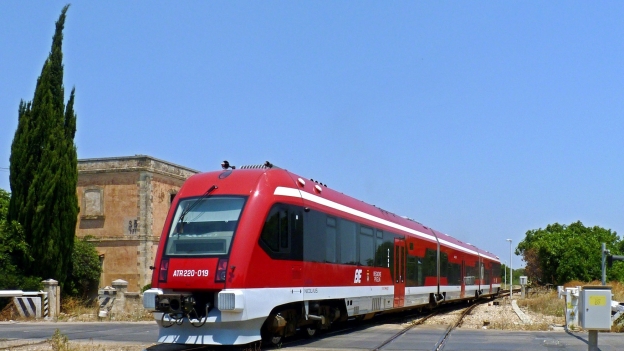 I would recommend downloading the Puglia-Basilicata pdf timetable booklet from from the Trenitalia website: trenitalia.com: orari regionali). This covers the Trenitalia services together with the train services offered by the regional train companies.

The rules for trans­porting bikes are set out in Italian on the fseonline.it: Diritti e doveri dei viaggiatori (Rights and duties of travellers) page.

The FSE is in the process of modern­ising its fleet and many, if not most, trains are equipped to take bikes, but it’s possible that there are still a few that aren’t. According to the FSE website, for inform­ation you need to phone either:

You also need a bike ticket - but these are free.

Another point to bear in mind is that the FSE trains are replaced by buses on Sundays - presumably to allow for maintenance and upgrading work.

Like the other train companies in Puglia the Ferrovie Nord Barese is modern­ising its fleet and the newer trains are equipped to take bikes. You can read the detailed rules here:
ferrovienordbarese.it: transport of luggage bicycles and animals.

Again you need a (free) ticket for your bike.

The company operates trains between Foggia and Peschici on the Gargano peninsula and between Foggia and Lucera. all their trains are now equipped to take bikes and there’s no charge for taking your bike on the train. Ferrovie del Gargano (it/en). For more detail on the rules for carrying bikes see: ferroviedelgargano.com: bike transport on board the train. 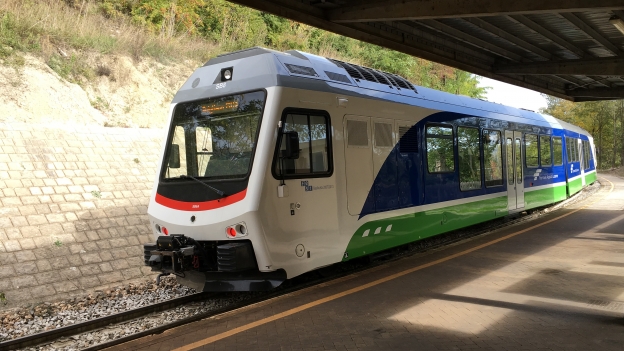 The Ferrovia Appulo Lucane (FAL) operates services between Bari in Puglia, and Matera in Basilicata. The Basilicata region has also invested a lot in new trains, and there are now only a few trains that can’t take bikes. You can check by downloading the pdf timetable: (ferrovieappulolucane.it: orario treni). Trains that can’t take bikes have the words ‘NO BICI’ at the top of the column. The timetable also shows services where buses replace trains.

The Ferrovia Circumetnea operate services around Mount Etna between Catania and Riposto (Ferrovia Circumetnea: network map). I haven’t been able to find any official inform­ation about whether you can take bikes on the company’s services, but according to this article on it.wikipedia.org the company has renovated 6 of its trains and the renovated trains include a bike compartment.

Most of the rail services in Sardegna are run by trenitalia (and are bike-friendly). There are also some narrow-gauge services that are run by the ARST (Azienda Regionale Sarda Trasporti). These include the rail line between Alghero and Sassari and connect with the trenitalia services to Porto Torres, Olbia and Cagliari.

Since June 2016 there’s been a fleet of brand-new trains operating on the line. I haven’t travelled on this type of train, but the videos and photo­graphs clearly show the bike picto­grams on one set of doors in each unit.

There’s no inform­ation on the timetables on whether there are any restric­tions on rush-hour trains, but it’s probably better to avoid busy times.

The single fare from Alghero to Sassari is 3.10€ (2016) and the same again for your bike-ticket. The region is devel­oping a system of integ­rated ticketing for public transport, at the time of writing (2016) it was trialling integ­rated tickets for journeys using ARST and Trenitalia services between Alghero and Porto Torres.