So far as I know, all of the train companies in Italy require you to have a ticket for your bike, as well as one for yourself.

On trenitalia, the national train operator, the ticket costs 3.50€ and lasts for 24 hours from when you ‘conval­idate’ it. Alternatively, if you are going on a short journey where the fare is less than 3.50€ you can simply buy a second ticket for your bike. The official name for the ticket is Biglietto Bici al Seguito ticket (pronounced ‘segwitto’ rather than ‘segweeto’) but you could just ask for un biglietto trasporto bici or just un biglietto per la bici.

You have the option of buying a second ticket for your bike if that is cheaper. I’ve never found a way to buy a bike ticket from a ticket machine, so buying a second ticket may be an option if you don’t have time to queue at the ticket office. UpdateYou can buy tickets from ticket machines: just choose the ‘Other Services’ (or whatever it’s called in the language you’ve chosen) option in the main menu screen. You’ll need to input the details of your journey (but don’t worry the ticket is valid for any train on which you’re allowed to take bikes). 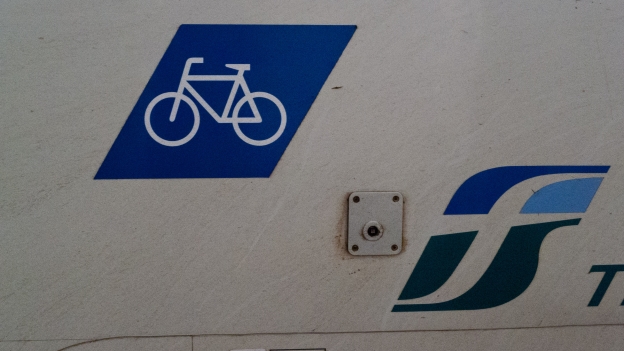 It’s worth bearing in mind that because the tickets aren’t issued for a particular date you could buy them in advance if you know you have a train journey coming up.

Get your ticket stamped! 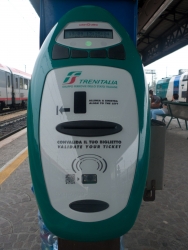 You must stamp (convalidare) your ticket - unless you have a ticket for a specific train (eg one of the high speed services) when it isn’t necessary to stamp the ticket. If you forget, or can’t find a machine, then going in search of the train manager (capo treno) and ask him/her to sign it on the back. Don’t wait for them to find you as you risk a fine - and not speaking Italian isn’t an excuse as the small print on the back of the ticket tells you in English that you need to validate the ticket (‘who reads the back of the ticket?’ you ask, well yes true, but legally you can’t say you weren’t told).

The Partenze posters at stations are the most reliable guide to whether a train has spaces for bikes - so if you’re not sure look for the bike pictogram. The posters also helpfully show the departure platform (binario). However, bear in mind that these occasionally change, so check with the station monitors for the most up-to-date inform­ation. If you hear an announcement and other people on the platform start hurrying off then the chances are there’s been a change of platform announcement. (Listen out for the word ‘binario’).

At major stations announce­ments are in English as well as Italian.

Bear in mind that some stations have a second ‘piazzale’ which is like a station within a station. Confusingly this means that there might, say, be Binario 1 and a Binario 1E - the second indicates Binario 1 in the Piazzale Est rather than two ends of the same platform.

Getting around stations is mostly pretty straight­forward in that there will usually be a lift down to an underpass linking the platforms, however there are excep­tions where there is no lift so you have to lug your bike up and down stairs. At some major stations (Roma Termini, Firenze, Milano, Napoli) the platforms will be linked by the main station concourse so no steps to worry about. At minor stations there will often be a simple strip of tarmac across the tracks. 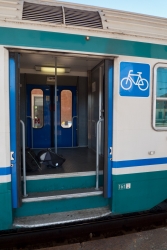 Some older regional trains have steps to the bike compartment

A final thing to bear in mind is that in some regional trains you will need to lift your bike up steps to get it onto the train. My advice would be: